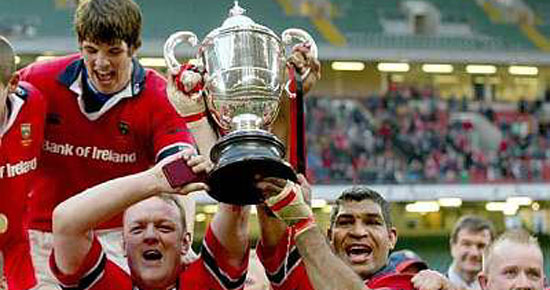 Jim Williams, one of the most respected people in the rugby game in the northern hemisphere will leave Munster at the end of the current season to take up the role of assisant coach to new Australian boss, Robbie Deans

Jim Williams, one of the most respected people in the rugby game in the northern hemisphere will leave Munster at the end of the current season to take up the role of assisant coach to new Australian boss, Robbie Deans

Williams. who joined Munster at the start of the 2001/2002, has another year to run on his Munster contract but CEO Garrett Fitzgerald, once made aware of the ARU’s interest, indicated that Munster not stand in the way of the move should terms be agreed.

“From our own perspective, ” said Fitgerald, ” we’re obviously disappointed to see Jim go. He has been a huge asset, a great presence,  to us,  both as a player and more recently as a coach. But that aside,  we do recognise the honour and importance of his new role and wish him every success.”

Fitzgerald confirmed that he (Williams) had made Munster management aware of the ARU’s interest some weeks ago, thereby allowing the Munster Provincial Team Management begin the process of replacing Williams.

Commenting on the news, Munster coach Declan Kidney said, ““While never wanting to lose a member of the Munster family we fully understand the honour been bestowed on Jim by his national team. We appreciate the contribution he’s made to Munster rugby and we wish him and his family all the best for the future.”

Williams made his debut for Munster in the 40-19 Celtic League win over Connacht in Thomond Park in August 2001 and went on the win 74 caps before retiring at the end of the 2004/2005 season. He captained the squad the season that culminated with victory in the Celtic League final and when he hung up his boots he joined the Munster coaching staff under coach Declan Kidney.

Speaking from his Cork home,  Williams said, “ To be asked to coach at national level is such a huge honour and one that any coach would jump at.

“It’s an opportunity that doesn’t come around too often and I am really looking forward to working with Robbie Deans.

It’s an exciting challenge at a time when Australian rugby maybe needs to go in a different direction and I’m looking forward to being part of that process.

“Having been part of the Munster set-up over the past eight seasons has been one of the greats periods of my career professionally.

“But just as importantly, on a personal level, my wife Megan and me couldn’t have asked for a better environment for us and our family.

“All that considered, there is a job still to be done. We are mid way through what has been a good season but there’s lot of rugby still to be played.. A lot to play for and my focus now is on helping Munster achieve the goals that we set out at the start of the season.”