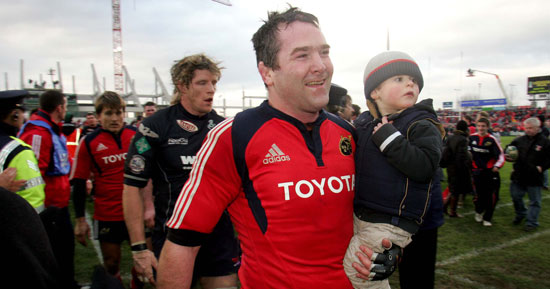 Munster’s most capped player (192 caps) Anthony Foley today announced that he will retire from rugby, both club and province, at the end of the current season.

Munster’s most capped player (192 caps) Anthony Foley today announced that he will retire from rugby, both club and province, at the end of the current season.

stages for the 10th consecutive season.

His 23 Heineken Cup tries makes him Munster’s leading try scorer in that competition, and his overall total of 44 sees him lead the try scoring list for the province. In addition he has been capped by Ireland at senior level on 62 occasions and also represented his country at Schools, Under 21 and A levels.

He made his senior competitive debut for Munster against Edinburgh in October 1994 and won the first of those 85 Heineken Cup caps  just over a year later against Swansea in Thomond Park.

Speaking about his decision the 34 year old who led Munster to Heineken Cup victory in 2006 said, “It goes without saying that I have enjoyed my time immensely with Munster. I’ve had a great career and I would like to say thanks to all those, starting in St Munchin’s, then in my club Shannon and Munster for helping me in my career. I dont want to mention names in case I leave people out but my sincere thanks to those who have helped me along the way.

“I’m not sure there is a good time to go, certainly isn’t easy to leave it behind but I think the end of this season is the right time to hang up the boots.  I would also like to thank  my colleagues down the years, acknowledge their contribution in both club and Province and wish the current squad the very best in their endeavours.

Commenting on the news, Munster coach Declan Kidney said, ” What can you say about an individual like Anthony Foley. His statistics

says one thing about him, over 13 years of top flight rugby, but those in the squad and management will remember his influence in the dressing room and his calmness and authority on the field.
“Everyone knows him as a very good player. We know him as a very good man.”
But Kidney was quick to remind that, ” He’s not gone anywhere yet. There’s still a lot of rugby to be played between now and the end of the season,  and we’ll be doing our level best to make it a memorable end to a tremendous career.