Mighty Munster Do It Again. 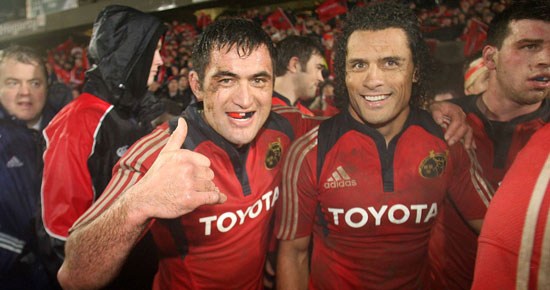 For the 10th successive season, Munster has qualified for the quarter-finals of this magnificent competition, thanks to last night’s 19-3 dismissal of defending champions London Wasps.

For the 10th successive season, Munster has qualified for the quarter-finals of this magnificent competition, thanks to last night’s 19-3 dismissal of defending champions London Wasps.

And, as usual, given the vagaries of ‘the pool of treacle,’ Munster’s passage into the last eight wasn’t secured as the game entered its final 10 minutes. But, as usual, when the men in red needed to find a score, they got it. They always do.

And the manner in which Denis Leamy’s pool-winning try was crafted again left the Thomond Park faithful gushing over the professionalism and discipline of their heroes.

On another of those nights which will be filed under the canine category, the meeting of the ’06 and ’07 winners was never going to be as open a game as their entertaining meeting in Coventry had proven.

Having failed to do so in the opening quarter of a game against an experienced Wasps pack, Munster slowly began to turn the screw up front to, ultimately, match winning effect.

With Ronan O’Gara superbly waving the conductor’s baton yet again, the combination of brains and brawn working in tandem between backs and forwards proved the winning of the game.

The most experienced forward unit in European Cup rugby, in which there were leaders all last night, grabbed hold of the soapy ball and worked it through 21 phases.

And while the 33 phases achieved on that dreadful night in Stradey was awesome in its own right, it didn’t yield a try, though it mattered little since the outcome was already decided.

But last night’s marathon of phases yielded Leamy’s five-pointer, due in no small part to the intervention of Doug Howlett, who twice secured possession when it appeared a Wasps turnover was inevitable.

In the pre-match huddle, Howlett peeked around a stadium which will rank as one of the finest in world rugby come completion of its reconstruction next autumn.

He’s already spoken about his desire to immerse himself in the Munster Rugby experience and on the evidence of both appearances thus far, he’s dived in headfirst.

The presence of fellow Kiwis Rua Tipoki and Lifeimi Mafi  has surely proven of enormous benefit to the All Blacks superstar.

His transition into the starting team this past week has been seamless, and it speaks volumes for the professionalism of Howlett that he already feels like a fixture in the XV.

The intelligence, footballing nous and physicality he’s brought to the table could prove instrumental in the knock-out stages of the ERC as well as the Magners League, in which Munster remain in title contention.

But wherever one looked around a sodden pitch last night, one saw Munster players rising to the mark, delivering the sort of display that wearing the jersey demands of them.

Jerry Flannery delivered a perfect lineout game. To throw a 100 per cent game in dry conditions is superb; to do so one a windy, wet, sloppy night in Limerick is above and beyond the call of duty.

As Raphael Ibanez’s throwing quality reduced itself to the sort of consistency I’ve produced in my odd hooking forays for Carrick, one’s admiration for Flannery’s consistency grew all the more.

In fact, since the start of the season, both Flannery and Frankie Sheahan’s throwing has been outstanding, as indeed has Bernard Jackman’s for Leinster.

So the art of hooking in Irish rugby is currently in rude health, despite the prophets of doom that continue to lament our national front row.

That Munster have so lightly weathered the absence of Paul O’Connell has undoubtedly been a surprise to even the most die-hard fan.

As captain and talisman, O’Connell at his best is reminiscent of Martin Johnson – dominating, marauding, inspiring and a complete pain in the arse for his opponents.

But his non-presence in the team has not hurt Munster all that much, though you’d meet no one who’d suggest that a fully fit O’Connell would not automatically start for province and country.

What is has provided, though, is a chance for Donncha O’Callaghan to demonstrate his leadership qualities and an opportunity for Mick O’Driscoll to display his undoubted talent.

O’Connell’s back injury has also seen Donnacha Ryan gain valuable match experience and he already looks like a guy good enough to wear the green jersey come the 2011 World Cup.

O’Callaghan may well have enjoyed his greatest 80 minutes of professional rugby last night. He popped up everywhere during a display of outstanding discipline and lineout domination.

Both he and ‘Micko’ completely disrupted the Wasps lineout, no mean feat given the quality and experience of the opposition.

Behind them, David Wallace showed evidence that he’s ignited after a slow burning start to the season.

Leamy’s efficacy and impact on a match certainly looks best suited from the blindside of the scrum, while Anthony Foley, as Mr G Hook justly commented upon, continues to play like the greatest captain Ireland never had.

Never mind his longevity (with John Hayes also springing to mind in this respect); it’s the quality of Foley’s contribution which remains a source of awe-inspiring admiration.

He cajoles not only the best out of those around him, but of himself, game after game after game. When’s the last time ‘Axel’ didn’t produce a big display in a European Cup match? Yeah, I can’t think of a below-par effort either.

Both Foley and Hayes are physical miracles of the species, and how lucky Munster are to have both.

As for Ronan O’Gara? He too appears to have grown as a leader in the absence of O’Connell.

He’d never have struck too many rugby fans as a captain-in-waiting, but if you were to look at both O’Gara and Brian O’Driscoll right now and ask which one does the mantle of captaincy rest easier on, the ayes would surely be calling in O’Gara’s favour.

It makes those anomalous World Cup performances all the greater a mystery, since there’s hardly a better number 10 anywhere on the planet right now.