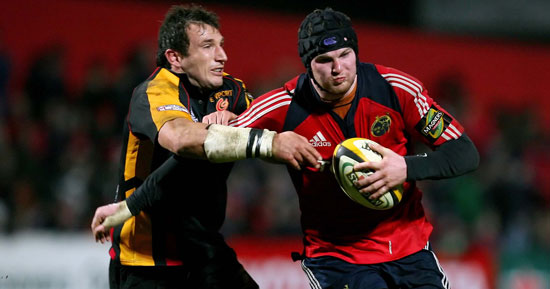 Donnacha Ryan then won his 13th competitive cap against the US Eagles in Toyota Park but injured his wrist next time out in the friendly against Saracens. He returned to Munster competitive fare in the game against the Dragons and was awarded the Setanta and Toyota man of the match award.

Book you are currently reading or have just finished:  Heroin Diaries and John Dalys Book.

Marooned on a desert island what could you not be without: A bucket and spade.

Favourite sport other than rugby: Hurling.

Person you would most like to meet: David Grohl.

Sportsperson you admire most: Team Hoyt.

Hobbies: Reading, golf, music, learning the guitar anything other than rugby.

Where and when did you first play rugby: Age 17. In Nenagh Co. Tipperary.

Biggest influence on career: Pat Whelan from Nenagh and my parents.

Best career advice you were given: “Don’t worry about not been selected for them! Playing for the senior team is what matters”.

What you like most/least about being a rugby player: Most, the mates you make. Least,Injury.

Other sports that you played: Hurling, football, soccer, golf, basketball, athletics and swimming.

Best rugby memory: Getting picked for the Munster youths.

Rugby Player you admire most: Colin Murphy, who survived from a heart condition playing rugby.

Rugby team you admire most: Shannon.

Sporting event you would most like to attend: 2008 Heineken Cup Final.

If you weren’t a pro rugby player what would you be: A lot thinner.

Plans for life after rugby and what provision have you made: I’ve a degree in Commerce and Irish. Maybe teach or work on the stock market.

Advice you would give to aspiring pro rugby player: Get an education. Rugby doesn’t last forever.

Three people you would invite to dinner and why: Jesus, he’d cover the food and drink for the night. Nostradamus, he might give us a few racing tips. Michelle Rodriguez, she looks like she could do with some food.