Hayes Named Player Of The Year 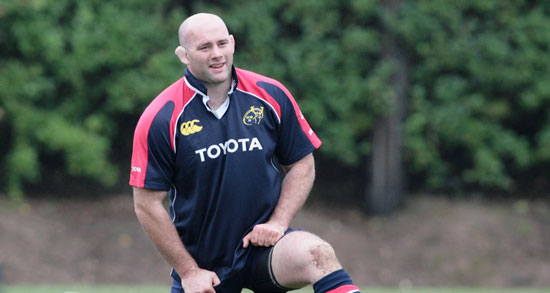 At the inaugural Munster End of Season Awards dinner, held in the Silver Springs Hotel in Cork, John Hayes was voted Senior Player of the Year while fellow prop, loosehead Darragh Hurley was named the Young Player of the Year.

At the inaugural Munster End of Season Awards dinner, held in the Silver Springs Hotel in Cork, John Hayes was voted Senior Player of the Year while fellow prop, loosehead Darragh Hurley was named the Young Player of the Year.

Four hundred and fifty attended the Irish Examiner sponsored function, that had RTE Radio Rugby Commentator Michael Corcoran as Master of Ceremonies with Mario Rosenstock and Fergus Slattery the guest performers, Rosenstock bringing the house down with his impersonations of Jose Maurinho, Daniel O’Donnell and Roy Keane.

Among the award winners were, Keith Earls (John McCarthy Award for Excellence), referee George Clancy and Paula O’Connor who received her Women’s Player of the Year award from Fiona Hayes, wife of John and Ireland’s most capped Women’s international.

Clubs that received awards on the night were, Douglas, Tralee, Sunday’s Well and Garryowen with Damien Philpott accepting the School of the Year trophy on behalf of Presentation Brothers College.

The Munster Player of the Year John Hayes (33) was born in Limerick, educated in Doon CBS and lives in Nenagh. He started his rugby career in Bruff RFC before moving to play in Shannon. He won the first of his 135 Munster caps against Edinburgh almost 10 years ago (August 1997) and has been a regular on the Ireland team since his international debut in Feb 2000 in the Six Nations game against Scotland at Lansdowne Road.

Four nominees were selected by the Munster squad and an Irish Examiner poll selected Hayes ahead of David Wallace, Donncha O’Callaghan and Shaun Payne.

Young Player of the Year, 21 year old Darragh Hurley from Kinsale, was educated in

CBC and UCC and came through the Munster Academy system to make his Munster senior debut earlier this season in the Magners League game v Cardiff at The Arms Park. A former Munster Schools, Ireland Schools and Under 21 international his 11  caps this season included a Heineken Cup start against Cardiff Blues.

Academy. Past recipients include Ross Noonan and Tomas O’Leary and his year the award went to Limerickman Keith Earls who crowned a marvellous season by helping the Ireland Under 21s to the Grand Slam. Shortly after, he made his senior debut for Munster when he came off the bench in the game against Neath Swansea Ospreys at the Liberty Stadium.

Earls was unable to attend the ceremony – he was engaged at a Grand Slam victory celebration in Dublin – and the award was accepted on his behalf by his mother.