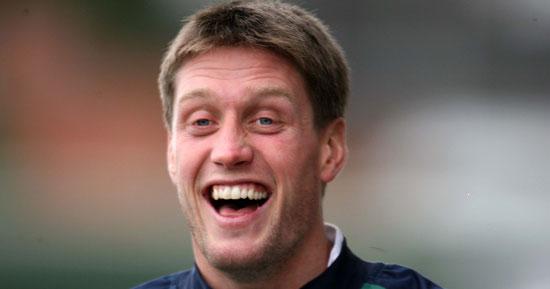 Out-half Ronan O’Gara is set to win his 70th international cap as Eddie O’Sullivan today named an unchanged starting XV for the game against Scotland in Murrayfield (1.30).

Out-half Ronan O’Gara is set to win his 70th international cap as Eddie O’Sullivan today named an unchanged starting XV for the game against Scotland in Murrayfield (1.30).

The only change in the match-day 22 sees Eoin Reddan come onto the bench in place of Isaac Boss who picked up a shoulder injury in Ulster’s defeat by Llanelli Scarlets in Stradey Park last Saturday.

Meanwhile, Scotland forwards coach George Graham believes the national side’s pack is the strongest one the country has had in a long time.

Graham also believes the Scotland pack can provide the platform from which the national team can bounce back after last Saturday’s shock defeat to Italy with a win over Triple Crown-chasing Ireland this weekend.

"I have no doubt in my mind that this is one of the best packs that Scotland have had for many a year – and that is not false bravado," Graham said.

"They are a great bunch of guys, they’ve got a great attitude, and in training they are very positive -it is just about getting things right on the day.

"I was very pleased with the way the pack stacked up against Italy. We’re not the biggest pack in the world, but the way that my guys have improved over the last couple of seasons is fantastic, and we just need to continue to go up and up.

"We are very competitive, and as we saw against Wales a few weeks ago, on our day we can dominate teams.

"The Irish pack are doing very, very well – they are very competitive, they are aggressive around the breakdown and their set-pieces are quite steady – but the Scottish coaches have done their homework and we are aware of that.

"We’ll approach this game the same as we approach any other game," he added.