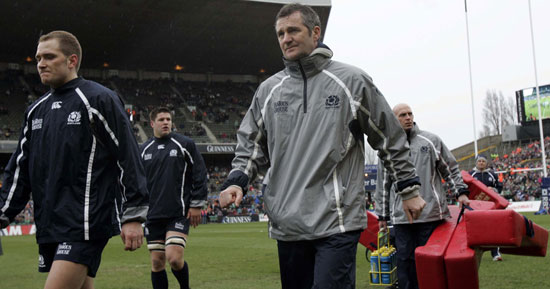 While Welsh management remained diplomatic when questioned over some of the decisions handed down by referee Kelvin Deaker on Saturday the media pointed to three crucial awards that went Ireland’s way in the course of their 19-9 victory in Cardiff.

While Welsh management remained diplomatic when questioned over some of the decisions handed down by referee Kelvin Deaker on Saturday the media pointed to three crucial awards that went Ireland’s way in the course of their 19-9 victory in Cardiff.

Peter Bills writing in the Irish Independent said, “No referee from this part of the world would have allowed Ireland to keep on infrnging at the breakdown. Ireland went on and on killing the loose ball and being caught offside, especially Donncha O’Callaghan. Deaker went on doing nothing.”

Simon Thomas of the Western Mail felt, “there was another penalty try shout mid-way through the first half when the Irish blatantly brought down a Welsh driving maul as it hurtled towards their line.”

Gerry Thornley (The Irish Times) was one of those who made mention of the incident at the start of the second half when it appeared that Simon Easterby had impeded Chris Czekaj as he raced for the loose ball with the Irish line at his mercy, some (not Thornley) suggesting Easterby’s action warranted a penalty try.

Ireland coach Eddie O’Sullivan however had this view of the Czekaj incident, “I saw the replay and thought it would have been a very harsh penalty try,” he said. “At no point did I see him (Easterby) grabbing Czekaj’s shirt. When two players are going for the ball why does Czekaj have more right to go for the ball than Simon?”

“I think Czekaj fell over him and the crowd reacted. If the referee had given it I think we’d be saying that it was a harsh penalty try.

Not surprisingly, the man himself, was adamant, “I was impeded when I was going for the ball,” 21 year-old Czekaj told Andy Howell (Western Mail). “I thought it was a penalty try, but the referee and touch-judge did not see it like that, and the decision did not go our way.”

Then there was the incident leading up to Ronan O’Gara’s try with Ireland holding a slender 12-9 lead. Wales were awarded a free-kick giving James Hook the opportunity to boot his side into Irish territory. However, Deaker deemed that Hook had taken the free, allowed O’Gara’s charge to stand and Wales lost possession, position and, minutes later the game when Gordon D’Arcy marvellous break led to the O’Gara try.

Watever about the merits or not of Welsh complaints, there are few who would not understand Scotland coach Frank Hadden’s frustration with the decision to award a try to Johnny Wilkinson the previousday in Twickenham.

Wilkinson dived over in the corner but even before television replays were flashed, it appeared that he had dragged a foot in touch before dotting down. Even as referee Marius Jonker was asking TMO Donal Courtney to adjudicate, the television replays showed that Wilkinson had put a foot in touch but without too much delay, Courtney informed Jonkers that he could award the try.

“What’s the point of having a TMO if they get it so horribly wrong?” said Hadden to the BBC. “It’s hugely irritating. It’s not humanly possible to make that mistake. It was so obviously wrong.”

Even Wilkinson himself admitted that he hadn’t been convinced he had scored. “When I went over in the corner I felt it was touch and go with getting the ball down and my foot down,” said the England fly-half. “That is what the video ref is for. Hopefully it was a try. I am not one for accepting things otherwise.”