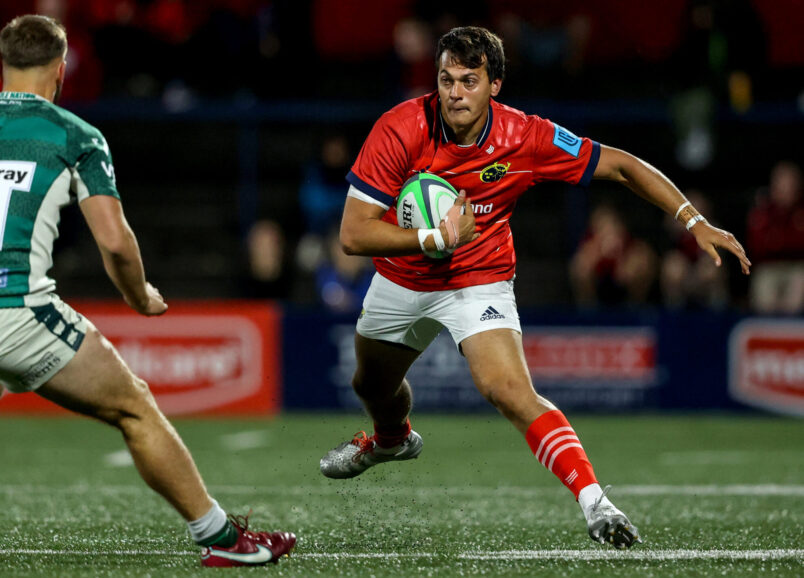 Antoine Frisch made his first appearance for Munster on Friday night. Inpho

Munster fell to a 19-14 defeat to Declan Kidney’s London Irish at Musgrave Park on Friday night to round off the pre-season games ahead of the new season.

Mike Haley and Paddy Patterson were the Munster try-scorers with Jack Crowley converting both but it was London Irish who claimed the Jack Wakefield trophy.

A lacklustre first half saw Munster trailing 12-0 at the interval with James Stokes and Matt Williams touching down for the visitors.

Both tries were scored after well-worked moves and it took some strong Munster defence to limit the visitors’ lead to 12 points after 40 minutes.

There were eight changes at the break for Munster with new signing Frisch coming on for his debut at outside centre alongside fellow replacement Malakai Fekitoa.

The province began the fightback within minutes of the restart as Fekitoa and Paddy Patterson combined to release Haley, who finished powerfully in the corner.

Crowley converted from the touchline and Munster were back in it at 12-7.

The home crowd had been waiting for a chance to get into the game and they got right behind the team as Munster started to play with renewed purpose.

Fekitoa fed Liam Coombes for a gallop down the right wing as Munster looked the more dangerous side throughout the third quarter but London Irish defended well.

The crucial try came on 65 minutes for Declan Kidney’s men as they went left off a scrum in midfield and made huge ground with Henry Arundell touching down.

Jacob Atkins converted for a 19-7 lead with the visitors gaining the upper hand at scrum time to further strengthen their grip on proceedings.

Munster looked to hit back immediately and a good period of pressure paid off on 73 minutes as livewire scrum-half Patterson sidestepped over from close range after Academy lock Edwin Edogbo had been stopped just short.

Crowley converted to set up a grandstand finish and although Munster showed some good attacking touches late on, London Irish never looked in danger of conceding another try and held on for the victory.

On the injury front, Calvin Nash (head) and Alex Kendellen (leg) both departed with knocks and will be assessed by the medical team.