Munster A Miss Out On Celtic Cup Final 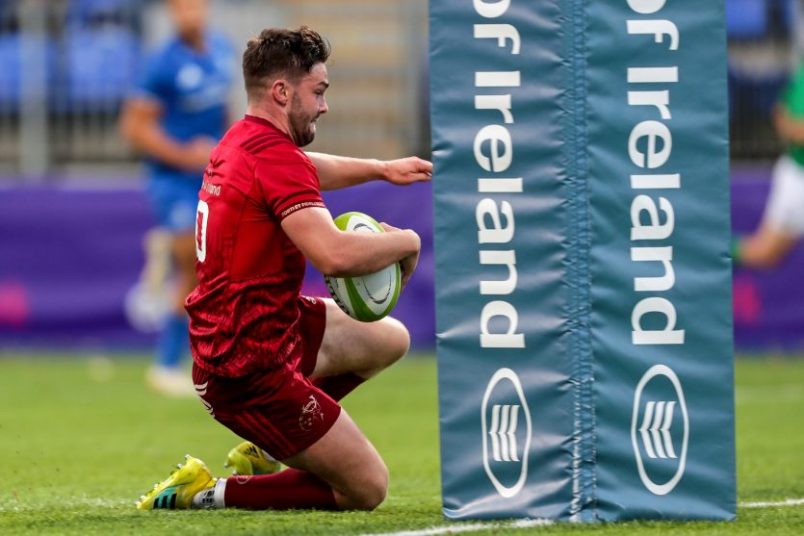 Munster A captain Bill Johnston scoring a try against Leinster A.

Munster A suffered their first defeat of the Celtic Cup on Friday night and missed out on the final after falling to a 46-25 loss to Leinster at Donnybrook.

Munster made late changes to their side as Stephen Fitzgerald dropped out and Liam Coombes moved from wing to full-back as Sean French came into the side on the wing. Jack Stafford was included at scrum-half with Charlie O’Doherty moving to the bench.

French and Johnston touched down in the second half with Johnston kicking both conversions but Munster A fell to a 46-25 defeat.

Both teams entered this final round contest with five wins from five, so this was a straight shootout for top spot in the Irish Conference.

There were just 40 seconds on the clock when Leinster A opened the scoring as Conor O’Brien kicked a loose ball through and Kearney beat the cover to finish.

The strength of the Munster A pack saw them gain a foothold and Johnston turned a scrum penalty into three points.

Leinster A prevented the concession of a try but another penalty close to the posts led to flanker Scott Penny being sin-binned.

Johnston’s routine place-kick made it 6-5, but Leinster A gained good territory and were rewarded with a successful 24th-minute penalty from Reid.

The breakneck pace continued as an intricate move on the left opened up space for the Munster A backs, and scrum-half Stafford dived over in the corner for an unconverted score.

Leinster A soon piled on the pressure with three penalties kicked to touch, and it eventually paid off with Penny crashing over from a 38th-minute lineout maul. Flanker Sean O’Connor was sin-binned in the build-up as Munster trailed 15-11 at the break.

Another powerful maul try from Leinster A saw openside Penny complete his brace but Munster A pulled the deficit back to 20-18 with a 47th minute try from winger French, who profited from quick recycling after an initial Gavin Coombes break.

Unfortunately for Munster, the home side’s physical presence in the lineout paid dividends again with another rolling maul setting up Bryan Byrne to get on the scoresheet.

A break by Vakh Abdaladze then set up replacement scrum-half Hugh O’Sullivan for a run in under the posts.

Munster A refused to lie down with Johnston converting his own try to keep his side in contention before a sweeping Leinster A attack ended with Kearney putting Adam Byrne over for a try on the right wing.

Leinster A put gloss on the scoreline thanks to a late score from centre with Reid kicking his fourth conversion of the night.