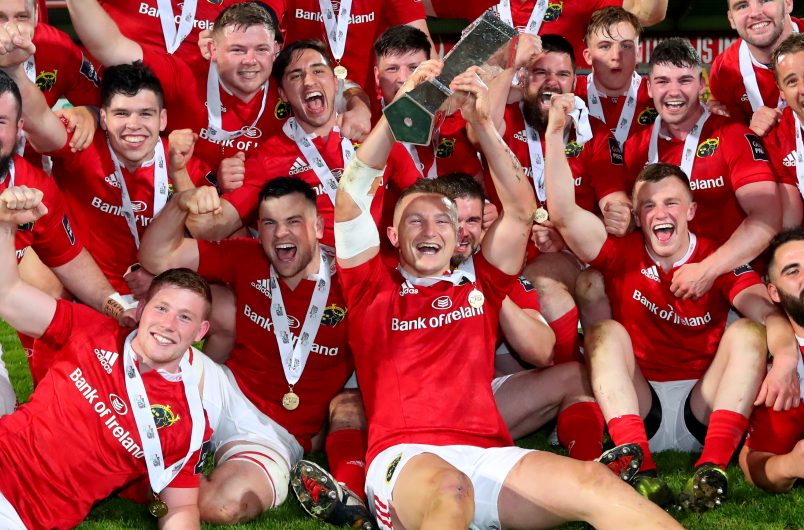 Exemplifying the never say die attitude that one associates with Munster, Peter Malone’s ‘A’ side overcame an eighteen point deficit to secure their second British and Irish Cup title on a 29-28 scoreline in a game that will live long in the memory for those that attended Irish Independent Park this evening.

It was a calamitous start that had the province down by eighteen points with less than fifteen minutes on the clock, Nick Scott running in the game’s first try in the opening minute with Callum Sheedy adding two penalties along with a conversion for the visitor’s second try, which came via hooker Joe Buckle.  The power of Jersey’s massive pack was the bedrock of their opening half performance, but it was a well worked move down the left flank that saw winger Scott race over in the corner, while Buckle’s score came off a clever dummy at maul time.

The second quarter eventually saw the Munstermen start to retain possession, but for the most part they could not convert it into points, thanks first and foremost to the Jersey pack, most notably their back row.  Be it in the scrum, breakdown or in defence, Jersey had the measure of their hosts who continually were forced into knock-ons and penalties.

However, having spurned earlier opening half chances, Munster found their rhythm in timely fashion just before the interval and relentless pounding on the Jersey tryline paid dividends when Gavin Coombes sniped at close range.  David Johnston’s conversion made it very much game on as the sides headed for the interval – 7-18.

Regaining parity in the physicality stakes as the game progressed, the men in red had the dream start to the second half, Kevin O’Byrne finishing off a fine team try that was spawned by an excellent Alex Wootton break with clinical phase play then seeing them over the whitewash.  Johnston’s conversion made it a four point game, but the province’s young charges would have to wait a while longer before getting their noses out in front.

Instead it was the Jersey pack who reasserted some of their opening half dominance, winning a scrum against the head off of which scrum half Kieran Hardy raced to the try line with Sheedy adding the conversion.

Unlike in the first half exchanges, the penalty count began to favour Munster and, off repeated kicks to the corner, they eventually got the try that they so desperately needed.  Opting to attack down the blindside, Johnston did extremely well in diving low into the left corner, and there was more to come from the playmaker who was one of Munster’s most impressive performers on the night.

A long looping pass from Johnson to Cian Bohane just outside the Munster 22 was the catalyst for Munster’s final try.  From there captain Bohane did well to find Wootton for some back-three magic, pining the ears back and beautifully stepping two defenders in racing over the line.  It was fitting the Johnston kicked the extras to eventually put Munster in the lead.

Still struggling at times in the scrum, a penalty at setpiece allowed Sheedy retake the lead on 61 minutes, but Munster looked the far more assured and sprightlier outfit as we headed for the final quarter.

Further inspired kicking from Johnston and Stephen Fitzgerald kept Munster playing in the right areas and when the penalty eventually came on 68 minutes, Johnston slotted what was in essence the kick for the title.

Munster A held out from there for the sweetest of victories and their second B&I Cup title.