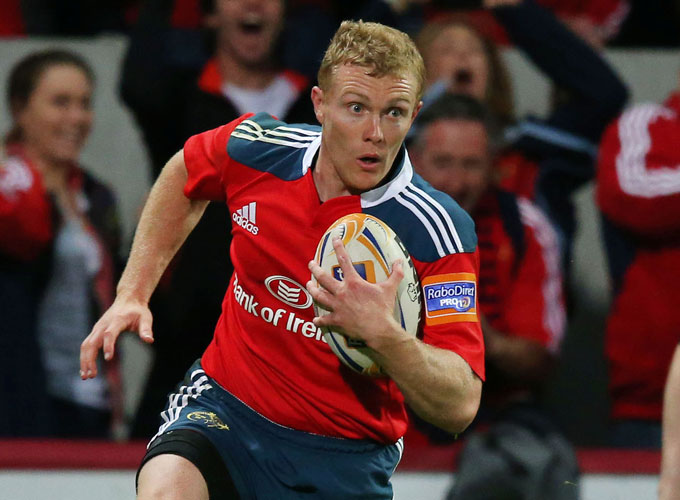 Paul O’Connell and Keith Earls have been named in the Munster side for the Thomond Park clash against Treviso tomorrow night (ko 7:15pm).

O’Connell starts after captaining Ireland to Six Nations glory in Paris last weekend with Earls coming into the side for the first time since injuring his knee against Edinburgh in January.

On the inclusion of O’Connell, Munster Head Coach Rob Penney said: “Paul wanted to be involved this weekend to keep building off the momentum of his successful Six Nations campaign with the Irish team.

“It shows the calibre of the player – he came to watch the team train on Tuesday and he wants to contribute against Treviso and secure more game time ahead of a crucial period.”

Damien Varley returns to captain the side in his first start since January as Penney makes 11 changes to the side that were beaten by Scarlets in Round 16.

Earls starts on the right wing as one of four changes to the backline with Felix Jones at full-back, James Downey coming in to partner Casey Laulala in the centres and JJ Hanrahan at out-half.

Johne Murphy keeps his place on the left wing with Duncan Williams staying at scrum-half.

Donnacha Ryan is the only forward to keep his place in the starting XV with the Tipperary man moving from lock to flanker.

Varley, James Cronin and John Ryan make up the front-row. Billy Holland comes into the side to partner O’Connell in the second-row. Sean Dougall and Paddy Butler, who makes his first appearance since January after suffering a spinal concussion on club duty, are named in the back-row with Ryan.

New Zealand hooker Quentin MacDonald was nominated for Munster’s Heineken Cup squad yesterday and could make his debut off the bench with Irish internationals Dave Kilcoyne and Stephen Archer completing the front-row cover.

Simon Zebo and Ian Keatley will be hoping to make an impact off the bench with Keatley looking to reach 500 points for Munster, the out-half has scored 497 points in his 66 appearances.

Gerry Hurley, who was also nominated for the Heineken Cup squad yesterday, provides the scrum-half cover.

Tickets will also be on sale from the Mobile Ticket Office at Hassett’s Cross tomorrow from 9am.

Hospitality tickets are available online here for just €;70 or you can contact our Sales Development Executive on 087 620 2530 or via email: anthonymorrissey@munsterrugby.ie 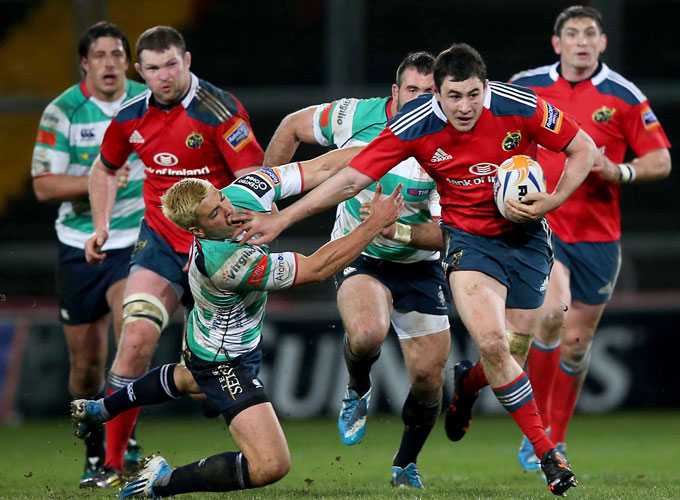 Keith Earls marked his return from injury with a try as Munster moved back up to second place in the RaboDirect PRO12 with a 14-3 win over Treviso at a freezing Thomond Park.

James Downey was the other try-scorer with his second in 41 appearances for Munster in a game that also saw the return from injury of Damien Varley, who captained the side, and Paddy Butler.

Felix Jones was man of the match after an excellent display with the full-back assured under the high ball and making yards nearly every time he was in possession.

Earls started well with a big hit early on but it was a lacklustre opening by the province and Kiwi out-half Mat Berquist kicked Treviso into a 2nd minute lead after a Munster infringement at the breakdown.

The unfortunate John Ryan had to be replaced by Stephen Archer in the 8th minute as the home side struggled to put Treviso under any pressure and JJ Hanrahan uncharacteristically missed two kickable penalties midway through the half.

Casey Laulala nearly created the first try when he chipped through a gap on the Treviso left but Italian international full-back Angelo Esposito was well positioned and managed to reach the ball before the chasing Earls.

Berquist missed a difficult penalty from the right on 32 minutes as the visitors threatened to push further in front.

Munster took the lead for the first time on 36 minutes when Hanrahan made a great break through the middle of the Treviso defence before passing inside to Earls who showed great feet to take it past Ludovico Nitoglia and dive in under the posts. Referee Leighton Hodges went to the TMO as Hanrahan’s pass looked forward but it was ruled flat and Hanrahan added the easy conversion to make it 7-3.

Berquist had the chance to narrow the gap just before the break but his penalty from the left just faded away and Munster went in at half-time with a four point lead.

Three of Munster's Six Nations heroes, Paul O'Connell, Conor Murray and Tommy O'Donnell, proudly paraded the Six Nations trophy at half-time. O'Connell was a late withdrawal from the side to face Treviso with a slight shoulder niggle.

Rob Penney’s side started the second half keen to make amends for a pedestrian first half display and went for the jugular early on with Hanrahan kicking a 42nd minute penalty into the corner.

The resulting rolling maul was halted just short of the line and when Munster went in-field the ball was held up over the line with Hodges awarding the scrum to Munster.

There were a number of resets and Treviso hooker Giovanni Maistri was sin-binned for his part but from the following scrum, with the Munster pack dominant, Treviso were awarded the penalty.

Munster kept up the pressure and were finally rewarded for their dominance in the 55th minute when Downey touched down in the left corner after Hanrahan’s cut-out pass. The TMO was called into action once again to check the grounding of the ball but the try was given and Hanrahan brilliantly kicked the touchline conversion to move Munster into a 14-3 lead.

They were unable to build on that advantage as the rain began to pelt down and Treviso centre Michele Campagnaro wasted a great chance when he dropped the ball on the right wing after a turnover on the ‘22’.

The bench was emptied in the final quarter but with conditions worsening there were no further chances for either side as Munster secured their 14th win in 17 PRO12 games so far this season. 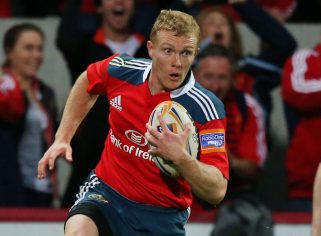