Wins yesterday for Glasgow Warriors and Ospreys leave Munster little margin for error when they take on Treviso in the Stadio di Monigo later this afternoon.

As things stand they need a bonus point win, and Scarlets to get nothing from their game earlier at the RDS, to move to fifth place, in what has become a four horse race for the two remaining play off places.

Two of those horses, Ospreys and Leinster have to visit Thomond Park in the coming weeks, so Munster need to take something home from their Italian venture, to leave themselves in place for the knock-outs.

No matter the time of year, Treviso are a formidable outfit here in Stadio di Monigo, two of their three defeats to date this season by just one point against league leaders Ulster and third placed Leinster. The other loss against second placed Glasgow Warriors.

And a brief glimpse of their Captains Run yesterday informed that they'll bring intensity, commitment and real ambition into this afternoon's clash.

Munster have it well within themselves to win this one but they know only too well that they need to be much more clinical and little more cutting than they were a week ago to do that.

They'll be aided in the first instance by the presence of James Coughlan and in the seond by the return of Felix Jones, James Downey and Casey Laulala.

But they do need to get to the pitch of the game early because if they don't, the longer it goes on the more the Italian will grow in confidence. Munster do not want to be going into the final stages chasing this game.

A lacklustre performance earned its due reward when Munster were soundly beaten 34-10 by Benetton Treviso at the Stadio di Monigo.

The home side were full value for a victory that saw them score five tries, three in the opening half at which point they led 22-3.

Munster did get an early enough second half try that looked like it might kick start a revival but the error littered nature of their display put paid to that possibility with the home side taking full advantage.

Those errors started right from Ian Keatley's kick off when the normally ultra-safe James Coughlan knocked on – although he was caught unawares – and less than three minutes had elapsed when Ludovico Nitoglia was dotting down under the Munster posts, Brendan Williams breaching slipshod defence to set the move in motion.

And despite playing into a stiff breeze, Treviso enjoyed territorial advantage and extended their lead in the 29th minute again off turnover ball with number 7 Filippo Giusti getting over off a maul.

Keatley got Munster on the board with a penalty from the ten metre line four minutes later but Munster failed to use this as a springboard, instead Gideon La Grange applying the finishing touch after Denis Hurley failed to deal with a clever Alberto di Bernardo cross field kick.

The last action of the half saw di Bernardo land an easy penalty when Felix Jones was caught in possession and again that was a score that originated when Munster turned over possession when attacking inside the Treviso 22. A little more cuteness when they broke free and Treviso could have had the bonus try in the bag before the break.

The Munster scrum was one area Munster got right and it led to their try in the 49th minute when Stefano Traversi – who had replaced Neil Paterson (hamstring) early in the opening half – losing patience after the under pressure Italian scrum buckled yet again. The official also saw fit to yellow card someone and strangely it was the Treviso hooker Giovanni Maistri who was given his marching orders.

Not that it make much difference to either side, Munster unable to take advantage, Treviso not appearing too disadvantaged with number 8 Christian Loamanu upping a towering display. Though Munster were a tad unfortunate that a pass that sent Paddy Butler clear and the line at his mercy was deemed forward.

Ultimately it was incidents like that plus a plethora of unforced errors that sealed their fate and defence again proved their achillies heel in the 60th minute with scrum half, the lively Fabio Semenzato scampering down the standside touchline for the bonus try.

The icing on the cake for the home supporters came when Giulio Toniolatti slipped tackles on the far side to score the fifth try before Munster could make their way dejectedly back to the dressing room. 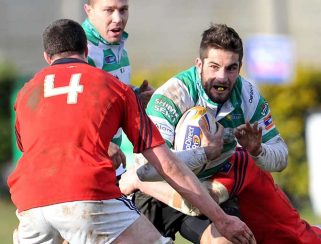