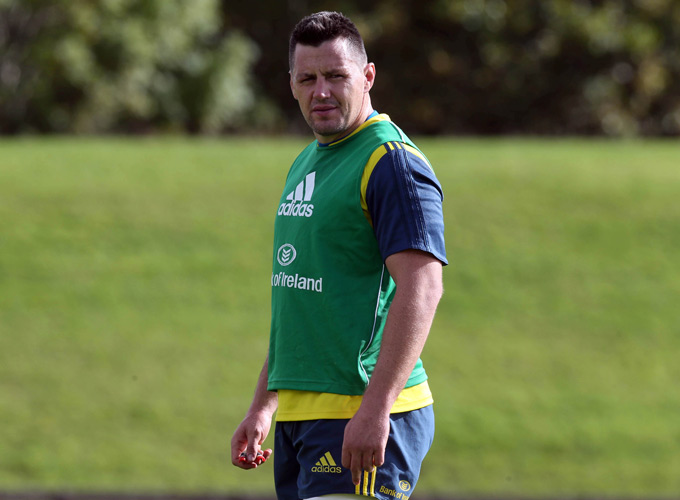 There are nine changes to the team that beat Edinburgh three weeks ago with two players making their Thomond Park debuts.

Simon Zebo comes in at full-back for his first start since injuring his foot in October with Johne Murphy keeping his place on the left flank.

Denis Hurley comes back into the side to partner Casey Laulala in the centres with Duncan Williams and JJ Hanrahan returning to form the half-back combination.

Dave Kilcoyne, Duncan Casey and Stephen Archer make up the front row with Donncha O'Callaghan and Dave Foley in the second-row. Barry O'Mahony is joined in the back row by CJ Stander and captain James Coughlan to complete the starting XV.

Sean Dougall and Cathal Sheridan are included on the replacements bench after recovering from recent knocks with Ian Keatley in the squad after featuring for the Irish Wolfhounds two weeks ago.

The experienced Billy Holland and winger Andrew Conway are also amongst the replacements. Niall Scannell is forced to miss out after picking up an elbow knock in yesterday's training session.

Munster face Cardiff Blues in round 13 of the RaboDirect PRO12 tomorrow night in Thomond Park at 7:15pm. Tickets will be available to buy on the night. 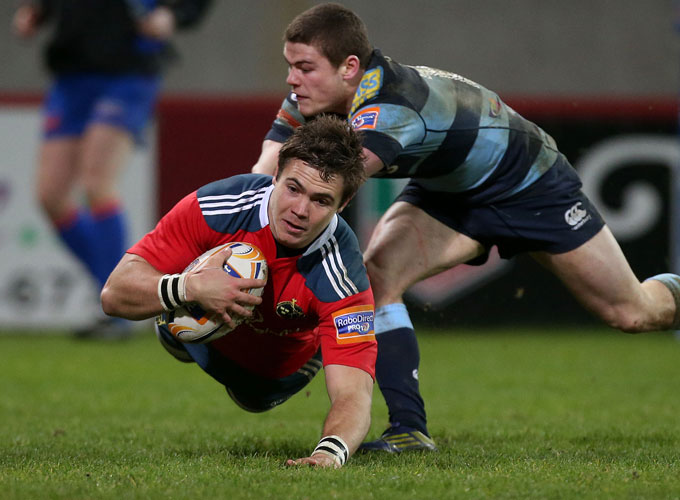 Munster extended their lead at the top of the RaboDirect PRO12 to seven points as they dismantled Cardiff Blues with a six-try 54-13 win at Thomond Park.

Rob Penney’s side dominated throughout with JJ Hanrahan kicking 10 out of 10 with the tee and scores from Dave Kilcoyne, Simon Zebo, Gerhard van den Heever, Andrew Conway, CJ Stander and a penalty try securing the bonus point.

Early Munster pressure yielded a fourth-minute Hanrahan penalty but the Blues were off the mark three minutes later when Dave Foley went off his feet at the breakdown with Gareth Davies making it 3-3.

Kilcoyne forced his way over the line for the first try in the 10th minute after man-of-the-match James Coughlan barrelled his way just short of the line after a Munster line-out.

Cardiff once again hit back when winger Harry Robinson made a great break down the right before passing inside to centre Owen Williams who dived over in the corner. Davies landed the touchline conversion to make it 10-10 after 13 minutes.

Hanrahan moved Munster back in front with a difficult penalty from the right in the 22nd minute to regain the lead and a third penalty in the 27th minute made it 16-10.

Davies closed the gap on the half hour when Munster went off their feet to make it 16-13 with his second penalty but Hanrahan restored the six-point lead from just ouside the ’22 after a Cardiff offside and the half ended with Munster leading 19-13.

The win, and the bonus-point, were secured as Munster scored three converted tries in a devastating six-minute period midway through the second half.

The Munster pack were completely dominant in the scrum and referree Giuseppe Vivarini had to sin-bin substitute Patrick Palmer just short of the hour after a number of scrum resets and the penalty try was awarded soon after with adding the conversion to make it 26-13.

Zebo touched down the third try in the 64th minute when substitute James Cronin made a rampaging run down the left with Coughlan picking the ball up off his bootlaces before spreading it to Zebo on the right to dive over unopposed.

The bonus-point was secured in the 66th minute when Hanrahan’s perfect crossfield kick to the right wing was collected by Van den Heever and he outpaced full-back Dan Fish before running in under the posts for his first Munster try on his Thomond Park debut with Hanrahan making it 40-13.

Substitute Andrew Conway showed great footballing skills to score his second try of the season, both coming against Cardiff, after Fish made a hash of dealing with a chip with Conway hacking on before touching down just before the ball went dead.

Stander smuggled the ball over the line for the sixth try at the death with Hanrahan landing the difficult conversion from the right to seal Munster's biggest win of the season. 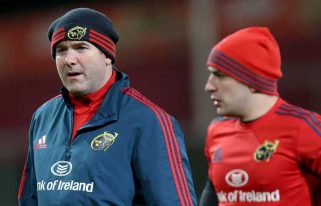 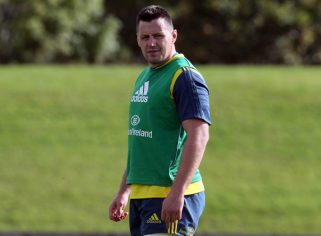