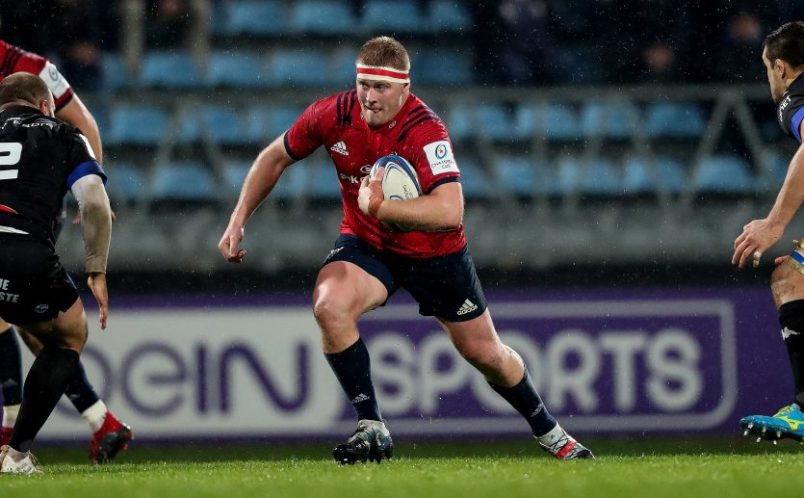 John Ryan comes into the side.

Head Coach Johann van Graan has made just one change to his Munster side that defeated Gloucester last weekend for Saturday’s crucial Champions Cup clash against Exeter Chiefs at Thomond Park (5.30pm).

Conor Murray makes his 50th Champions Cup appearance just over seven years on from making his competition debut against Northampton Saints in the famous 23-21 victory at Thomond Park in November 2011.

The match is completely sold-out with additional seating installed at both ends of the ground to boost the capacity of Thomond Park to 26,267.

Mike Haley starts at full-back with Andrew Conway and Keith Earls on the wings.

Rory Scannell and Chris Farrell form the centre partnership with Murray and Joey Carbery in the half-backs.

Dave Kilcoyne, Niall Scannell and Ryan pack down in the front row with Jean Kleyn and Tadhg Beirne in the engine room.

O’Mahony, Tommy O’Donnell and CJ Stander make up the Munster back row.

Check out CJ Stander’s very impressive stats from the Champions Cup so far this season. 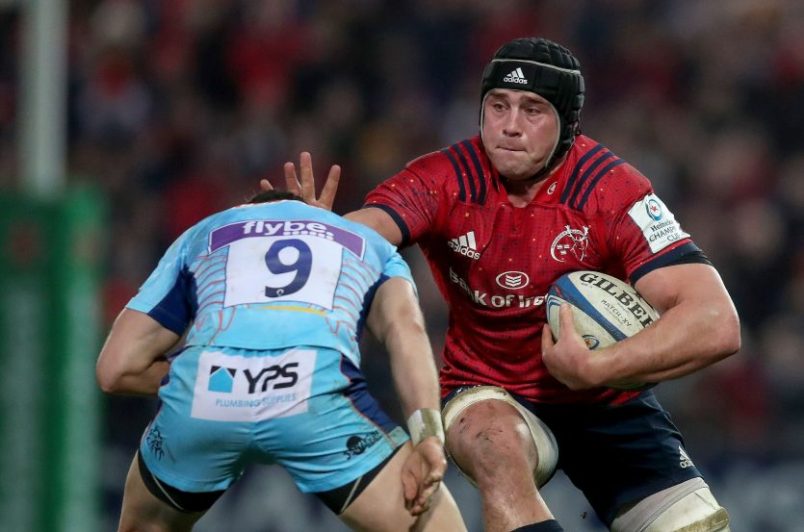 CJ Stander in action against Exeter.

This was a special European night at Thomond Park that in truth was never expected to disappoint.

Minutes in and it was clear that both sides had arrived packing an intensity and ambition capable of stirring up another great night to remember in Limerick.

Four minutes in and a foul in the air from Exeter awarded the Munster pack their first opportunity to test the visitors. Munster found touch, Stander took the lineout and a destructive drive forward proved too much for the Chiefs to contend with as second row Johnny Hill lost his shirt and discipline to grant Joey Carbery a straight-forward shot on goal.

Exeter replied impressively. Rob Baxter’s side got a hold of possession in the minutes that followed and when Munster were adjudged to have not released in the tackle, outhalf Jack Simmonds found touch excellently, just five metres out from the Munster line.

The men in red held out the initial wave of attack, but with the Chiefs continuing to knock on the door, they were soon to claim the first try of the evening when flanker Don Armand wriggled his way over.

Simmonds converted to make it 7-3 to the away side. With a knock-on inside Exeter’s half then coming in Muster’s attempts to bounce back, momentum seemed to be swinging in the visitor’s favour.

However, that was soon turned on its head. The two packs came together in the scrum and the home side responded emphatically with a dominant drive from the front row giving referee Jerome Garces no choice but to afford Joey Carbery a second strike at goal.

Last weekend’s man-of-the-match made no mistake to continue his fine form from the tee and bring his team back within a point of their pool rivals.

This was becoming an end-to end encounter between two proud outfits and on the half hour mark, Henry Slade again kicked Exeter down into dangerous territory. Johann van Graan’s men were in need of a big moment at this stage in the contest and it soon arrived when Tadhg Beirne did what he does best to get down low and force a turnover penalty to relieve some serious ever-growing pressure.

The end to the half was every bit as engaging and frantic as the minutes that preceded it.

Munster upped the ante – getting a clear upper hand at scrum time and becoming increasingly successful under the high ball, but just as things began to look up, a frustrating knock-on seemed to follow each time.

As the clock ticked red Exeter had another chance to capitalize on Munster’s unforced errors but thankfully the defence was able to stand firm once more and both sides head to the changing rooms with just one point the difference.

Arno Botha replaced the luckless Tommy O’Donnell at the break after the number 7 looked to pick up a knock.

Accuracy rather than power continued to let the hosts down as the second half unfolded with Munster continuing to visit the Exeter 22 with little return such was the opposition’s pressure in defence.

Conway threatened, not once, but twice, yet still the Chiefs rode the Munster storm. Tadhg Beirne had been a stand-out in the engine room throughout and when the Kildare man left the field of play injured as Exeter set up a lineout deep in the red zone, the hosts were forced to rally once again.

It was the experienced Billy Holland who stepped up to the plate in typical fashion. In his first involvement of the game the 33-year-old rose highest on his 5 metre line to steal the ball to deny Exeter of a brilliant attacking platform and help his side launch the counter.

With just over 10 minutes remaining, so much at stake, and both sides unyielding, Munster battled their way back into opposition territory.

After Jean Kleyn won a vital penalty inside his own half, Carbery found touch on the Exeter ten metre line and when referee Jerome Garces penalised the visitors for an infringement at the lineout, the 22-year-old outhalf was only too pleased to step up to the mark again.

With his third attempt of the evening all set-up to decide an all-important pool-decider, Carbery for not the first time this month was the calmest man in the stadium and struck his kick sweetly between the sticks to edge Munster in front at a crucial point. The strike was his 20th successive kick at goal.

In the closing five minutes Exeter dug deep to swing the scoreboard back in their favour, however Munster showed true character and ferocious determination to keep the Premiership side at bay.

Munster’s commitment in defence proved the difference, eventually tackling their rivals into touch and booking a quarter-final place in the Champions Cup for a third consecutive season, extending their record further by reaching an 18th knock-out stage in 24 seasons.

Joey Carbery kicked three from three off the tee and has been successful with his last 20 consecutive kicks.

Tommy O’Donnell was replaced at the break after sustaining a shoulder injury.

Hear what Niall Scannell had to say following the win. 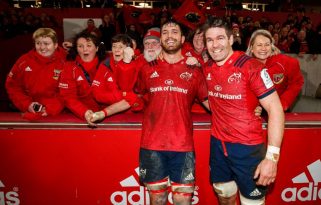 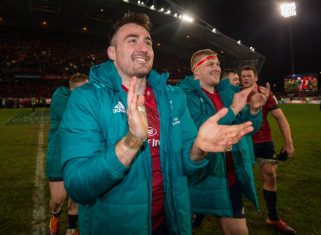 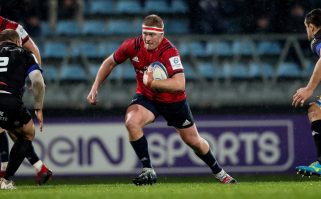 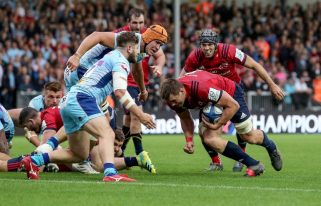 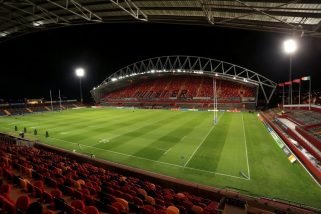 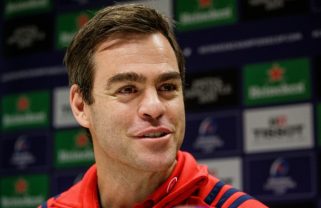 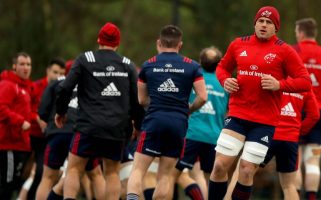 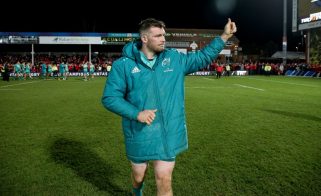 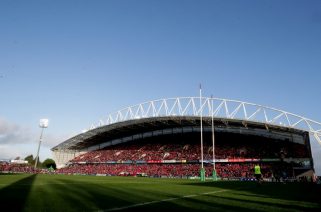 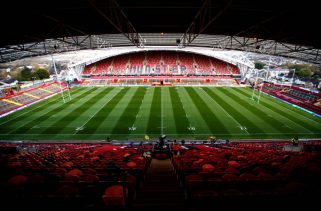