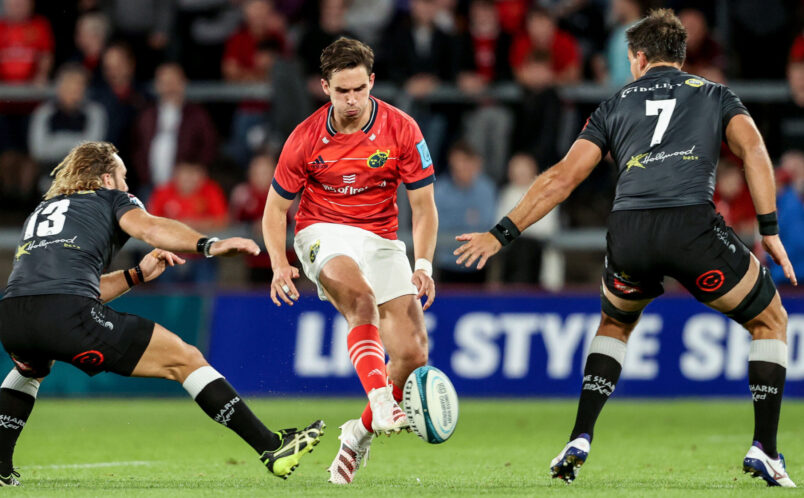 Joey Carbery starts at out-half for Munster against Leinster. Inpho

The Munster team has been named for Saturday’s URC Interpro derby against Leinster at Thomond Park (7pm).

Find out all you need to know ahead of the game here and buy match tickets here.

Gavin Coombes, who signed a new contract until 2025 this week, starts at no.8 on his 50th appearance for Munster.

Peter O’Mahony returns to captain the team as one of nine changes to the side that secured a bonus-point win over Benetton at Musgrave Park last week.

Replacements Thomas Ahern and Keith Earls are both set for their first appearances since January after recovering from their respective injuries.

Matt Gallagher starts at full-back with Nash and Shane Daly, who switches to the left wing, on either flank.

Damian de Allende moves to inside centre as Chris Farrell returns to the side at 13 with Murray and Carbery in the half-backs.

Jeremy Loughman, who recently earned his first international call-up, Niall Scannell and Stephen Archer pack down in the front row.

Jason Jenkins makes his first start for Munster in the second row alongside Fineen Wycherley, who starts his eighth game in succession.

Greencore Munster Rugby Academy back-row forward Alex Kendellen, who started the last three games at no.8, is included in the replacements and in line for his 13th appearance of the season.

In injury news, Dave Kilcoyne is being managed for a neck injury sustained in Ireland’s final game of the 6 Nations against Scotland.

Tadhg Beirne continues to be assessed for a thigh injury sustained in the same match.

Simon Zebo has completed the return to play protocols and returns to full training early next week along with Jean Kleyn (leg) and Mike Haley (knee).

Hear from Munster Head Coach Johann van Graan and Damian de Allende ahead of the match. 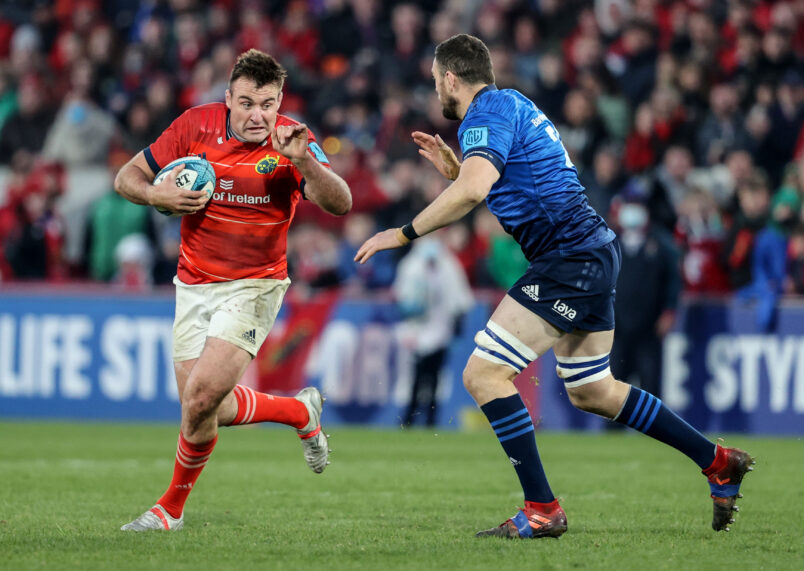 Munster fell to a derby defeat at Thomond Park on Saturday night as Leinster moved clear at the top of the URC table.

Damian de Allende was the Munster try-scorer with Joey Carbery kicking four penalties and a conversion.

Next up for Munster is a knock-out Champions Cup double-header against Exeter Chiefs in the coming fortnight.

The scoreline was 14-12 in Leinster’s favour at half-time but two tries for the visitors on 47 and 57 minutes put them firmly in control.

The Munster replacements made a good impact and Healy passed for de Allende to score after good work from Craig Casey to give Munster hope but a James Lowe try on 73 minutes sealed the win for Leinster.

Gavin Coombes limped off with an ankle injury after 23 minutes and will go for a scan.

Much of the opening five minutes were played near halfway but breakdown penalties against Chris Cloete and Peter O’Mahony gave Leinster the upper hand and they led after 10 minutes thanks to a Ross Byrne penalty.

Joey Carbery replied with a well-struck long-range penalty after a late tackle on the out-half by Jack Conan.

Garry Ringrose scored the first try for Leinster in the left corner on 16 minutes. Last-ditch Munster defence kept Leinster out following a big line break off a lineout move before the pass was floated out for Ringrose to score.

Munster responded superbly with Matt Gallagher catching a Leinster Garryowen before Cloete made good yardage down the left wing.

Good carries got Munster to within five metres of the line before a high tackle yielded the penalty and Carbery slotted the points to make it 8-6.

A harsh penalty against Niall Scannell when he poached Leinster ball gave the visitors another chance to attack and Munster were pinged again at the breakdown with Byrne’s second penalty making it 11-6 after 25 minutes.

Carbery kicked his third penalty from long-range immediately afterwards after Leinster were slowing the ball at the breakdown.

A fourth Carbery penalty gave Munster the lead for the first time on 37 minutes but they were unable to hold onto the lead as Leinster won back possession in the 22 and Byrne’s penalty gave Leinster a 14-12 half-time advantage.

James Lowe scored Leinster’s second try in the left corner after 47 minutes to make it 19-12.

A brilliant Kendellen tackle and turnover won the ball back for Munster after the restart but a handling error put paid to the opportunity.

Byrne added his forth penalty on 55 minutes after a Munster late tackle to move the visitors 22-12 in front.

Jimmy O’Brien was in for the third try on 57 minutes after good Leinster hands in midfield. Byrne converted for a 29-12 lead.

Munster had a mountain to climb now but the replacements upped the tempo with Leinster giving away a number of penalties in their own 22.

A quick tap from Casey got Munster to within striking distance before Healy passed for de Allende to score on 63 minutes with Carbery’s conversion making it 29-19.

Kendellen won a big turnover on 67 minutes and Healy’s penalty gave Munster the lineout in Leinster territory but the throw was crooked and another chance went abegging.

Lowe’s second try in the left corner on 73 minutes gave Leinster an insurmountable lead and although Munster pressed for a late try, the visitors’ defence held out.

Gavin Coombes made his 50th Munster appearance but limped off with an ankle injury after 23 minutes and will go for a scan. 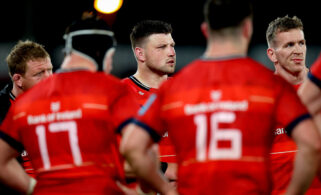 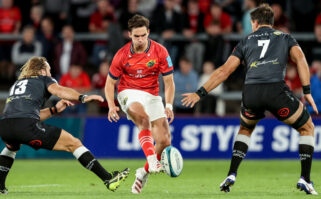 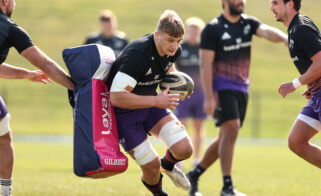 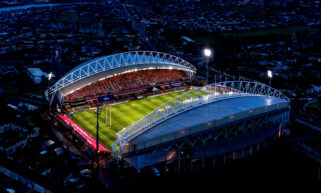 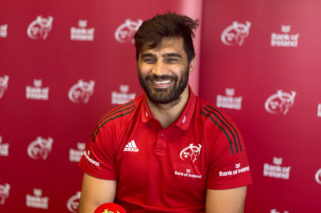 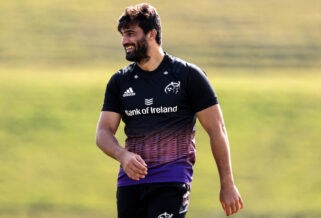 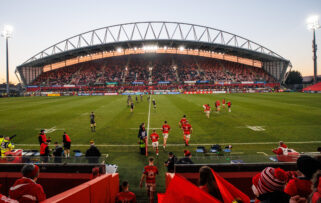 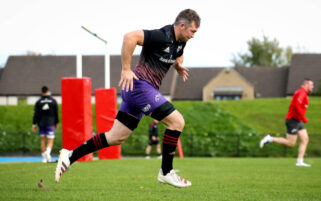 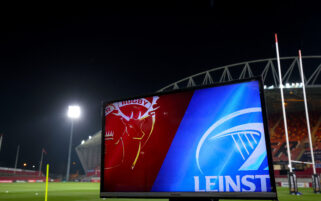 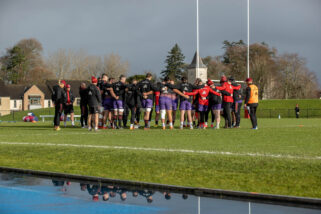 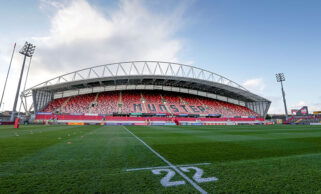 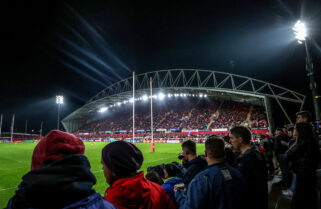