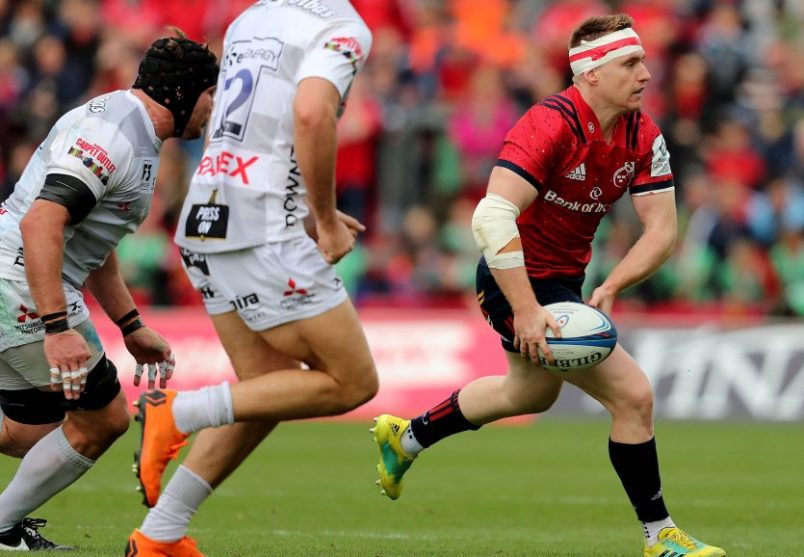 Rory Scannell returns to the side.

The Munster side has been named by Head Coach Johann van Graan for Friday night’s Champions Cup clash against Gloucester at Kingsholm (7.45pm, live on BT Sport).

Peter O’Mahony captains Munster with six changes to the side that defeated Connacht last weekend.

Chris Farrell keeps his place after receiving positive news on a knee scan this week.

Haley starts at full-back with Andrew Conway and Keith Earls on the wings.

Scannell and Farrell form the centre partnership with Murray and Joey Carbery in the half-backs.

Kilcoyne, Niall Scannell and Archer pack down in the front row with Jean Kleyn and Tadhg Beirne in the engine room.

O’Mahony, Tommy O’Donnell and Stander make up the Munster back row.

Rhys Marshall returns from injury and is named among the replacements with the hooker set to make his first appearance since October’s clash against Gloucester.

Munster Head Coach Johann van Graan, captain Peter O’Mahony and full-back Mike Haley all spoke to the media this week, hear the thoughts of the trio ahead of Friday night’s game below. 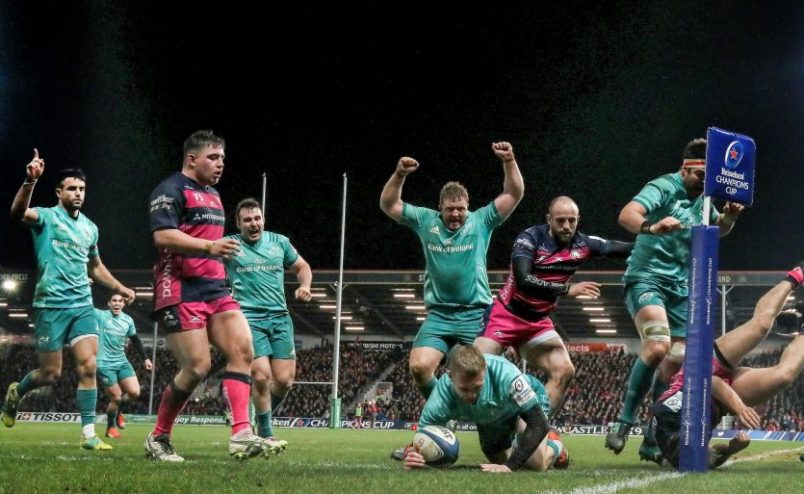 Munster produced an excellent team performance to move further clear at the top of Champions Cup Pool 2 thanks to a superb win over Gloucester at Kingsholm on Friday night.

Man of the Match Joey Carbery (two), Rory Scannell, Keith Earls and Andrew Conway all touched down in the victory.

Carbery was again flawless off the tee for the third game in a row with the out-half landing all five conversions along with two penalties.

Gloucester made the perfect start when former Munster man Gerbrandt Grobler claimed the kick-off with the hosts then winning a penalty and kicking to the corner.

Tadhg Beirne did brilliantly to disrupt the Gloucester maul and then a big scrum won Munster the penalty.

Gloucester were soon back on the front foot though and when referee Romain Poite penalised Munster at the breakdown on 13 minutes, Billy Twelvetrees landed the long-ranger for a 3-0 Gloucester lead.

Munster looked to hit back immediately with Conway very nearly latching onto a Carbery chip down the right wing.

The visitors were off the mark on 20 minutes after a good spell of pressure with Gloucester eventually penalised for offside with Carbery making no mistake to level it at 3-all.

Munster kept up the pressure with big carries from CJ Stander and Chris Farrell putting a dent in the Gloucester defence.

Conor Murray whipped out the decisive pass from the base of a ruck under the Gloucester posts with Carbery darting over to score.

The lead was 13-3 after 26 minutes after Stander and Beirne combined to win a penalty at the breakdown and Carbery landed a very difficult penalty to increase the Munster lead to 10 points.

There was no let-up from the visitors and Munster had a commanding 20-3 half-time lead after a clinical finish to the opening 40.

Johann van Graan’s men combined power and patience to score through Rory Scannell as they went through 26 phases as the clock ticked into the red with centre Scannell bouncing off a tackle before finishing expertly.

Gloucester needed a good start to the second half and they got it.

They scored in the left corner through winger Ollie Thorley after 52 minutes having gone through 35 phases virtually camped on the Munster line. Magnificent Munster defence held out for so long but they were finally breached and Gloucester were back in the game.

Twelvertrees was unlucky to see his conversion come back off the near post.

O’Mahony had gone off injured for Billy Holland minutes earlier and the replacement, on his 201st appearance for the province made a huge impact.

The lock offloaded superbly for Earls to score Munster’s third try after 57 minutes with the winger dotting down his 15th European try.

Carbery knocked over the touchline conversion for a 27-8 lead with 23 minutes to go.

Andrew Conway was denied Munster’s bonus-point try on the hour after he chipped ahead to finish superbly but Farrell’s offload was deemed forward in the build-up.

Gloucester kept their hopes alive with a 64th minute Fraser Balmain try from close range after a rolling maul with Twelvetrees’ conversion reducing the Munster lead to 12 points, 27-15.

An inventive Carbery chip in behind the defence was gathered by Conway to score the bonus-point try on 66 minutes.

Out-half Carbery continued his fine form with the boot for a 34-15 lead.

Carbery was over for his second try of the night a minute later as he read the play superbly and picked off a pass in midfield to race clear for a fifth Munster try.

The conversion made it 41-15 and that’s how it stayed. The win sets up a huge clash next Saturday against Exeter at Thomond Park with the Chiefs hosting Castres at Sandy Park on Sunday afternoon.

Peter O’Mahony departed with a rib injury and will be assessed by the medical team. 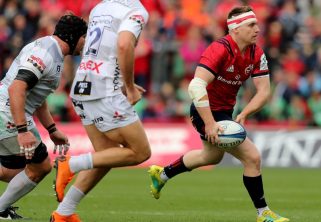 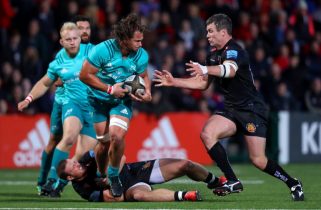 All You Need To Know | Gloucester v Munster 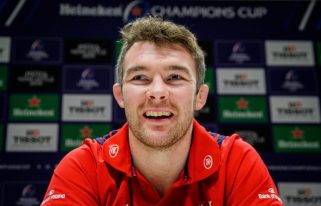 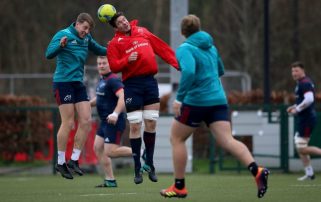 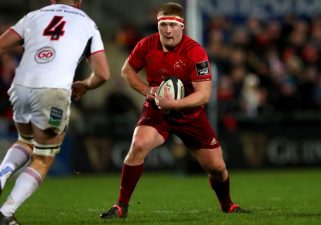