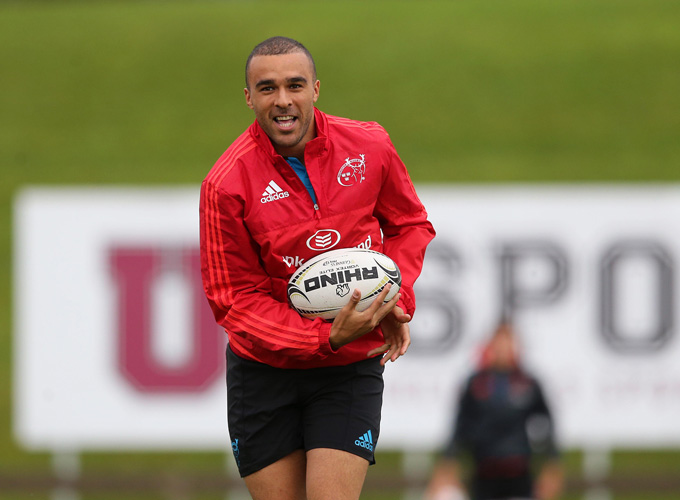 Head Coach Anthony Foley has named his side for tomorrow evening’s Interprovincial clash against Ulster at Thomond Park – KO 6pm. Returning internationals Simon Zebo and Donnacha Ryan are included in the matchday squad with new signing Mario Sagario in line to make his first appearance for the province.

In total Foley makes 7 changes to the starting XV that lost away to Scarlets last Friday night.

James Cronin and Mike Sherry come back in and join BJ Botha in the front row, while in the second row, Dave Foley starts at 4 for the first time this season with Mark Chisholm continuing at 5.

In the back row, captain CJ Stander makes the switch to blindside and Jack O’Donoghue returns at openside while Robin Copeland reverts to number 8 for tomorrow evening’s encounter.

After featuring twice from the bench in Munster’s most recent league encounters, Tomás O’Leary will make his first start since returning to the province in partnering Ian Keatley in the half-backs.

Francis Saili comes back in to start alongside Denis Hurley in the midfield for the first time while the final change comes in the back-three and sees returning international Simon Zebo start on the right wing. Gerhard van den Heever remains on the left wing as does Andrew Conway at full-back.

Having joined the province on a three month contract Mario Sagario could feature for the first time this weekend after being named amongst the replacements. Donnacha Ryan, another World Cup returnee, is also included on the bench.

Please note, Munster ‘A’ v Ulster ‘A’ set for next Wednesday at Thomond Park has been cancelled.

Family terrace packs for €;40 and general tickets can be bought online here, from the Munster Rugby Ticket Offices in Thomond Park and Irish Independent Park or by calling 0818 719 300.

Night of the Living Red
With the school mid-term break we're getting into the spooky spirit of things with a free Halloween Fancy Dress party prior to kick-off in The Dugout Bar and Fanzone Plaza.

The party is free and open to all children under the age of 16 years and the Munster Rugby Supporters Club will be on hand with plenty of prizes up for grabs for best dressed and more.

This is sure to be a great night for all the family so make sure to get dressed up and join us at The Dugout Bar and Fanzone Plaza for our Night of the Living Red on October 30th! 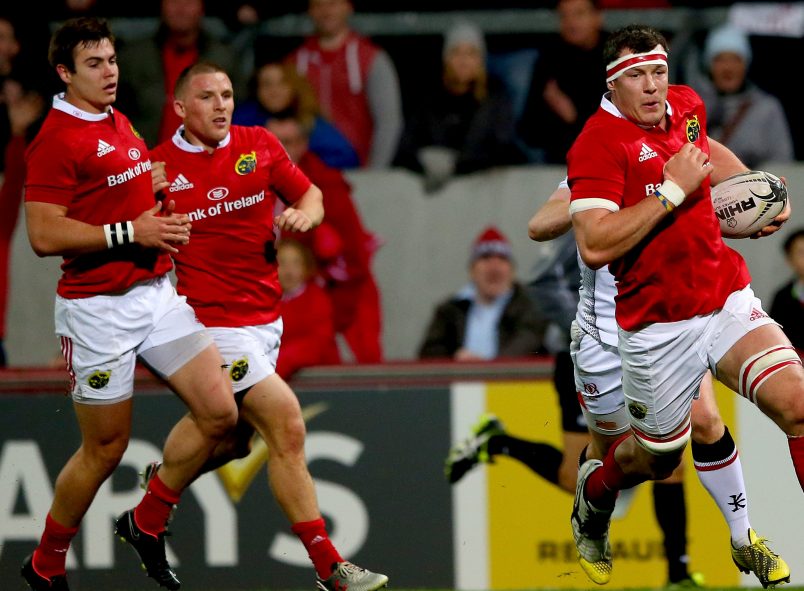 Thomond Park’s ‘Night of the Living Red’ provided the perfect backdrop for a nine-try thriller in round 6 of the Guinness PRO12 with the first Interprovincial of the season providing all the spills and thrills of a close-fought derby encounter.

With a first half display that produced 6 tries, 3 apiece, there was only one point between the sides at the interval with Munster leading Ulster 19-18.

The northerners opened their account through winger Craig Gilroy after Stuart McCloskey dislodged the ball from Francis Saili, and Darren Cave and Craig Gilroy linked well on the counter attack with the winger sprinting down the right wing to cross for the first score.

With the blustery conditions proving a challenge Paddy Jackson was unable to add the conversion as he kicked into the wind.

Munster equalised through Andrew Conway when Tomás O'Leary rounded the Ulster defence and offloaded to James Cronin who found Conway running at speed in support. The fullback did well to break the tackle of Gilroy before running over to score in his third successive game.

Keatley successfully kicked his first from the tee with the conversion, however, Ulster were back in front through a Paddy Jackson penalty two minutes later after James Cronin was penalised for not rolling away.

Gilroy added his second try after Ulster built the phases deep inside Munster's 22 and with quick ball from Paul Marshall, Gilroy was out wide unmarked and darted over from close range. The conversion from Jackson drifted wide and the six point margin remained.

The attacking rugby continued with Robin Copeland touching down next. Simon Zebo danced around the Ulster defence and shifted the ball to Ian Keatley who offloaded back inside to the number 8 who found himself in open space with nobody in front of him. Keatley added the extras to give Munster the one point advantage on the half hour mark.

Next up was Gerhard van den Heever in further extending the lead. The South African winger showed great pace after Tomás O'Leary popped him the ball 40 metres out and he backed himself to go all the way scoring in the right hand corner. After kicking the first two conversions Keatley didn't connect correctly on this occasion and the score remained 19-13 after 35 minutes.

There was no let-up as the half closed out and former Munster man and Ulster number 8 Nick Williams picked up the final points when he found himself at the end of a successful lineout maul.

The swirling wind once again disrupted Jackson's conversion attempt and the upright was the difference in Munster holding on to their one point lead at the half-time whistle.

On the resumption the Ulster outhalf was quick to take advantage of the improved conditions when playing in to the north terrace and turned possession into points when he kicked a drop-goal five minutes in. But Keatley once again put Munster back in front with a penalty four minutes later after the visitors were penalised for going off their feet.

It was Munster's superior try count that proved the difference in the second half and with two tries versus one from the visitors, the home-side did just enough in holding on for victory.

The men in red extended their lead thanks to tries from Denis Hurley and Simon Zebo, while Ulster replied through a converted Dan Tuohy score.

The firt came about following a lofty cross-field kick from Keatley. Wingers Andrew Conway and Gerhard van den Heever went up against the Ulster opposition in contesting the high ball and once it knocked backwards centre Denis Hurley was quick to pounce on the loose ball in claiming the bonus point winning try.

Minutes later Zebo got on the scoresheet when he finished off a backline attack deep inside the Ulster 22 and it proved to be the decisive score for Munster.

Dan Tuohy's converted try moved the visitors within four points with twelve minutes remaining, however, it was the final minute that caused most anguish.

A nervy finish ensued when Munster kicked the ball out on the full in thinking the game was over only to be informed that it was game-on and scrum Ulster. But a defiant defence denied the Ulster-men anything further and Munster recorded a 32-28 victory, and their fifth win of the season.

Round 6 PRO12 round-up: Tomás O'Leary made his first start for Munster since returning to the province and picked up the man of the match award. World Cup returnees Donnacha Ryan and Simon Zebo both saw their first provincial action of the season while Uruguayan prop Mario Sagario was named in his first match-day squad but didn't feature. Andrew Conway scored in his third consecutive game. Munster picked up their second try bonus point of the season, with the first coming in the game against Cardiff Blues. There was one Greencore Academy player in the squad with Rory Scannell involved. 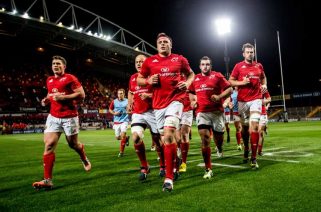 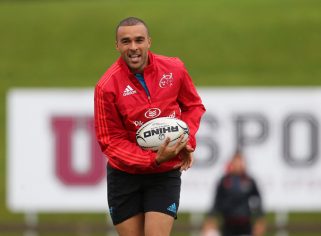