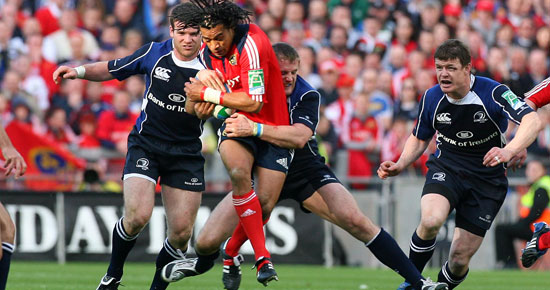 Munster’s dream of back-to-back Heineken Cup titles were well and truly shattered in Croke Park where Leinster dominated before ending up 25-6 winners in the first of the weekend semi-finals.

And there can be no arguments whatsoever about the merits of the Leo Cullen led Leinster side’s victory in front a world record attendance for a club game.

Right from the word go, when Felipe Contepomi burst into his opposite number to set out his side’s stall in the clearest possible fashion, Leinster won the collisions, the contest at the breakdown and ultimately the ball game, a fact acknowledged by captain Paul O’Connell "I’ll give them massive credit. They were far and away the better pack. They tackled very well and carried very well and dominated us an the breakdown as well," he said immediately afterwards, disappointment etched deeply on his face.

Contepomi was forced to retire early with a knee injury that looks set to rule him out of the final.

What will haunt this Munster side is that they picked the wrong day to have an off-day, producing a display that was so at odds with what we saw in the quarter final but again it was O’Connell who put that in perspective when he said, " No, we didn’t play well, no doubt about that. We probably weren’t allowed to play well. They were very tough up front. We were pretty much second place in every facet of the game today."

In the opening half Leinster scored a try through Gordon D’Arcy and although clearly the better side, were still only five points clear at the break (11-6). And maybe things might have been different for Munster if Keith Earls had managed to link with Doug Howlett after his (Earls) break in the 11th minute. And maybe not. As it turned out Earls was collared by Isa Nacewa and from the recycle, Ian Dowling was smothered up by the outstanding Rocky Elsom. Incredibly that was to be Munster’s only real try scoring opportunity although they squandered a huge overlap with a forward pass minutes later.

Just four minutes after the break Leinster stretched their lead with a try from Luke Fitzgerald, John Sexton’s conversion leaving Munster with a mountain to climb. And in reality, with Leinster defending, as they had done in London like dervishes, Munster never looked remotely like reaching the summit.

With 15 minutes remaining Brian O’Driscoll plucked an intended pass, from Ronan O’Gara to O’Connell from the air and raced the length of the pitch to score under the posts.

Game Set Match and a place in the Final to Leinster. And rightly so.