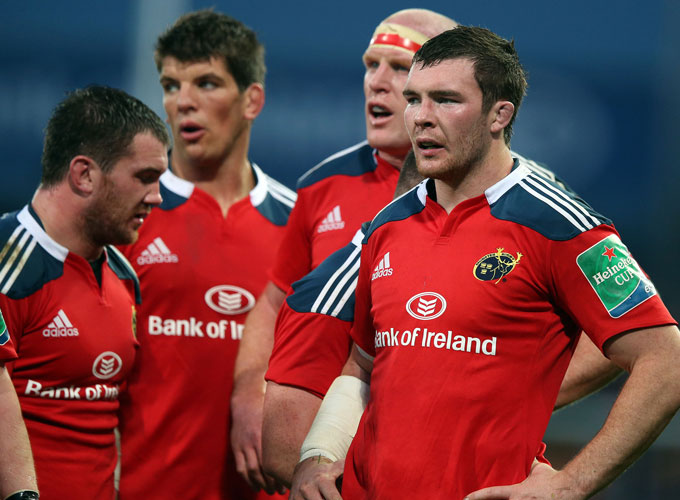 Captain Peter O’Mahony and Conor Murray are both included in the side for the first time since October.

Penney has made six changes to the side that extended Munster’s winning run to five games last weekend against Newport Gwent Dragons at Rodney Parade.

There are three changes in the backs with Murray coming in to partner last week’s man of the match Ian Keatley in the half-backs.

Casey Laulala returns to the side and lines up alongside James Downey in the centre positions.

Laulala’s inclusion means that Keith Earls moves out to the right wing with Johne Murphy coming into the side on the left wing and Felix Jones keeping his place at full-back.

Damien Varley is the only change in the front row as the hooker replaces the injured Mike Sherry with Irish internationals Dave Kilcoyne and Stephen Archer keeping their places in the side.

The second row of Donncha O’Callaghan and Paul O’Connell remains the same but there are two changes in the back row with Peter O’Mahony and Sean Dougall coming into the team.

James Coughlan starts at no.8 after recovering from an eye injury sustained against Newport Gwent Dragons last weekend.

Billy Holland is named on the bench for the first time in this season’s Heineken Cup alongside Shannon hooker Duncan Casey who could make his competitive debut for the province.

Munster currently lie second in Pool 6 of the Heineken Cup, a point behind Perpignan.

Category A and B tickets are now sold-out for the game with only terrace tickets remaining.

There are still North Terrace Family Packs available for just €;40 for one adult and one junior (under 16).

Terrace Tickets can be purchased here and on match day. 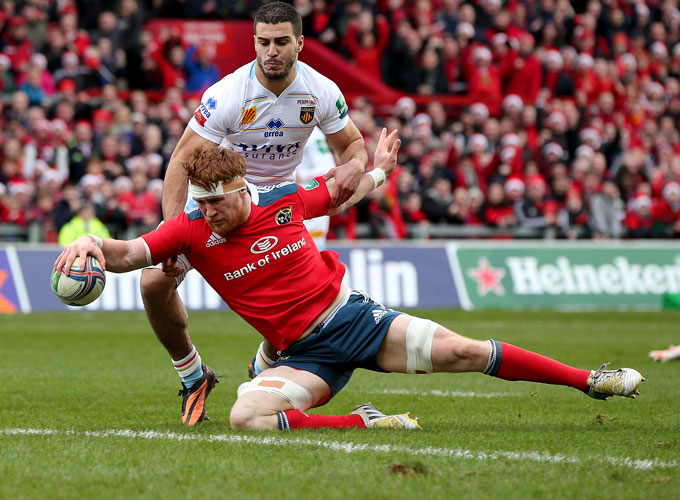 Munster produced their best performance of the season to secure a bonus-point 36-8 win over Perpignan at Thomond Park on Sunday.

First half tries from Sean Dougall, Dave Kilcoyne and man of the match Keith Earls plus a penalty try and a late James Coughlan effort moved the province to the top of Pool 6 in the Heineken Cup.

Munster started with the wind at their backs and made the perfect start with the opening try after three minutes.

Dougall touched down after Johne Murphy collected James Hook’s clearance and ran it down the left flank.

He then played a fantastic one-two with Conor Murray before unselfishly popping it inside to Dougall who dotted down.

Ian Keatley was on target with the conversion to make it 7-0.

The home side were nearly in again moments later after a quick line-out was played to Keatley but his cross-field kick for Felix Jones was just too deep.

The lead was stretched to ten points in the 11th minute when Keatley punished a Perpignan offside with his first penalty.

The second try arrived after 26 minutes when Keatley turned down the chance to kick another three points, instead kicking for the corner.

The lineout was successful and after intense pressure on the Perpignan line Kilcoyne forced his way over, Keatley was off target with the conversion and the score stayed at 12-0.

Earls touched down Munster’s third try after 35 minutes when Perpignan’s Sofiane Guitone lost the ball in contact on the left wing and the ball fell perfectly for Earls to sprint 50 metres and dive over in the corner.

Keatley made up for his earlier miss by slotting the touchline conversion and move Munster into a 22 point lead.

Perpignan could have reduced the arrears just before the break but Hook pushed his penalty just to the right and the scoreline remained 22-0 after an absorbing first half.

Munster started the second half playing into the brisk wind and Perpignan finally got on the scoreboard after 45 minutes when the home side were penalised for pulling down a maul and this time Hook’s penalty was on target.

JJ Hanrahan replaced the injured Keatley with half an hour remaining to partner Cathal Sheridan, who was an early replacement for the injured Conor Murray, in the half-backs.

The Catalan side very nearly scored their first try on 52 minutes but Dougall, who had a superb game, rescued Munster with a miraculous try-saving tackle after Tommaso Benvenuti and Tom Ecochard combined to send Luke Charteris clear.

It looked certain that the Welsh international would touch down but Dougall came out of nowhere to haul him down, the lock popped the ball up to Guitone to touch down but after a lengthy wait the TMO ruled that the pass was forward and the try was ruled out.

The bonus point was secured with a penalty try in the 64th minute after Dougall did brilliantly to hold onto Damien Varley’s throw into the lineout and Munster were awarded a penalty try after the French pack dragged down the maul that was careering towards their line.

Substitute prop Kisi Pulu was sinbinned for his part in the incident to make matters worse for the visitors with Hanrahan kicking the conversion to make it 29-3.

Earls thought he had scored his second try with eight minutes remaining when he touched down in the corner but James Downey’s pass in the build-up was ruled forward by the TMO and the try was ruled out.

The fifth try did arrive when the Munster pack drove their French counterparts over the line in the scrum with no.8 Coughlan grounding the ball and Hanrahan increased the lead with his second conversion.

Perpignan touched down late on when winger Joffrey Michel went over in the left corner but Hook missed the conversion.

Duncan Casey came on for his Munster debut with eight minutes remaining as a replacement for Varley and the Shannon club man played well in his short cameo.

On the injury front Conor Murray (right knee) is expected to miss next week’s game with the injury he picked up in the first half but Ian Keatley (dead leg) should recover in time.

Felix Jones left the field with cramp and should also be available for next week’s clash. 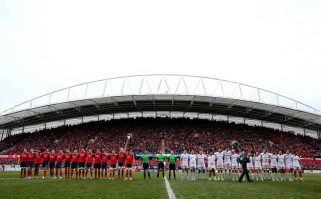 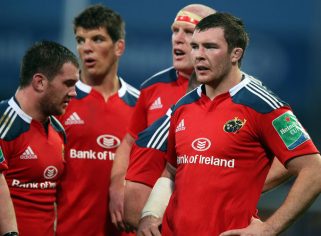