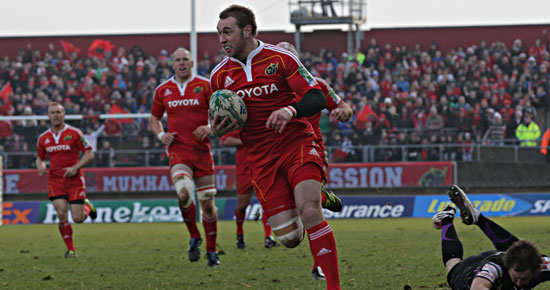 It wasn’t exactly pretty and in fact at times it was dog ugly but in the end Munster got the job done, winning 22-16 and remain in control of their own destiny with the trip to Swansea looming.

There can be no arguing but that they deserved their win, outscoring the Ospreys three tries to one and in fact they could be considered unlucky not to have scored a fourth to earn the crucial bonus.

Consider too that the much vaunted Ospreys backline never once threatened to breach the Munster line, their sole try coming from who else but Tommy Bowe who plucked Sam Tuitupou's pass out of the air as the Kiwi centre tried to make the most of an overlap right at the start of the second half. Bowe raced the length of the field to score under the post with Dan Biggar's conversion putting five points between the sides.

Bowe was the one back Munster had to watch carefully. In the first half, he showed his blistering pace as he set off after a diagonal kick from Biggar into the right hand East Stand corner with James Coughlan valiantly racing back. It semed Bowe would surely get the touch to take it away from Coughlan but the Dolphin man – who had a superb game throughout – somehow managed to smother the ball, regain his feet and save a certain try.

Considering the start they had to the second half and the fact that they had to play out the final ten minutes with 14 when Paul O'Connell was red carded Munster can be happy enough to have come out the right end.

In a stop/start first half they fell behind to an early Biggar penalty but regained the lead when Doug Howlett latched on to a clever Tomas O'Leary kick to score wide on the right after ten minutes of play.

Biggar restored Ospreys's advantage with a penalty three minutes later but it was Munster who threatened out wide, Paul Warwick on two occasions making good headway up the East Stand touchline setting alarm bells jangling in the Ospreys defence.

Ronan O'Gara who had earlier missed two penalties found the range in the 40th minute to send his side in with a slender two point but deserved lead.

The second half started with Munster pounding the Ospreys line. They looked sure to score when they went right with Damien Varley once again carrying strongly and then it looked on when they switched left but Bowe's interception meant effectively a 12/14 point turnaround and at that stage the momentum was most definitely with the visitors.

It changed dramatically in the 55th minute when prop Paul James was yellow carded for yet another front row offence and while he was cooling his heels Munster took the initiative.

Another sustained bout of pick n drive pressure ended when David Wallace was shunted over and when O'Gara had landed the conversion O'Connell and Alan Quinlan were launched from the bench.

Two minutes later a poor up and under from Biggar was collected by O'Leary who provided the pass for Murphy to score, O'Gara's perfect strike from wide opening up a nine point gap. Biggar reduced it to six in the 69th minute before full back Barry Davies was wide with an effort from half way

However, the O'Connell sending off left Munster defending desperately and it was first replacement Denis Hurley and then Quinlan who secured vital Ospreys ball that ensured Munster travel to Swansea with the bit still firmly between their teeth. 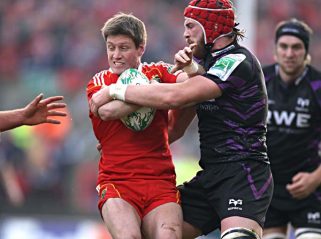