Munster Out Of Amlin 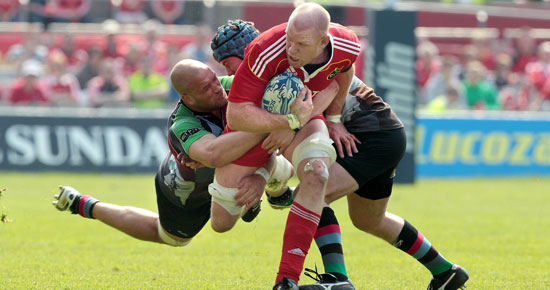 That Munster’s European odyssey came to a disappointing end last Saturday can be attributed to a quite dismal wind-assisted first half performance at the end of which they trailed Harlequins 14-7 and a second in which they managed to score once with just three minutes of time remaining.

In truth though, this game could very well have been over by the break as Harlequins, playing all the rugby, were denied further tries by last gasp tackles from Conor Murray and Felix Jones, while Nick Evans missed two penalties he would normally knock over with eyes closed.

Nearly 25,000 turned up to witness the 20-12 defeat – only the second in European fare at Thomond Park – orchestrated by Munsterman Conor O'Shea who quite clearly had done his homework to have his side at the perfect pitch for this encounter.

The visitor's defence was awesome all afternoon with Maurie Fa'asavalu leading the way with big hits and gut busting charges. Mike Brown was rock solid under the high ball, Danny Care a constant threat from the base of the scrum and centres George Lowe and Jordan Turner-Hall easy winners of the midfield exchanges.

Munster's first half display was reminiscent of the one here against Leinster some weeks back in that they looked a beaten docket as the half drew to a close. Then Felix Jones scored wide on the right and Ronan O'Gara added to conversion to send his side in for the break trailing by just seven points.

It should have been a sickening blow to Harlequins to concede so late in a half they'd dominated and when Munster re-emerged the roar of the crowd announced Paul O'Connell's arrival, the captain joined by John Hayes and Sam Tuitupou.
O'Connell had an instant effect. He called the first lineout on himself, took cleanly and Munster marched up field.
He called the second lineout ball on himself, again took easily and Munster laid siege to the Harlequins line. However, as they had being their wont, they turned over the ball and minutes later Rory Clegg was kicking a penalty at the other end to extend the visitor's lead.

Ten minutes later he added another just before a Doug Howlett try was ruled out for a forward pass.
Howlett was whistled up again after making a clear break, again for a forward pass, that although marginal, highlighted the lack of precision that was a hallmark of this Munster performance.

When he did eventually score it needed O'Gara to convert and offer his side a glimmer of hope. He missed the difficult kick but the feeling was that had he landed it to leave Munster requiring a converted try to snatch victory, they lacked the guile to pull it off.

However, to put this defeat down simply to Munster inadequacy would do Harlequins a serious injustice. They came to play and didn't let either themselves or their small band of loyal supporters down.
In that first half, unlike their hosts, when they launched their attacks they always looked dangerous and capable of scoring tries. Their first try came in the 9th minute when Gonzo Camacho evaded three tackles down the West touchline before being dragged down by Jones but when they spread the ball right they had number aplenty before George Robson touched down.
It might have been 14 six minutes later only for Murray's intervention and Munster's best chance came when James Coughlan picked up an overthrow and thundered deep into Quins territory, the support coming too late to make any profit.
Evans missed two penalties in the space of four minutes, Jones made his try saving tackle but the respite was brief as Care sniped from close range for a try that needed confirmation by the TMO.

The 39th minute Jones try offered hope but it proved to be a false dawn. Harlequins in fact dealt quite comfortably with what Munster had to offer in that second half with the Howlett try coming – shortly after he'd been just beaten to his own chip 'n chase – far too late to affect the outcome.

A clearly disappointed Tony McGahan said afterwards, "You need to give Harlequins credit with the gameplan they turned up with here today. We were confident at halftime of what we had to do but with no points coming we were chasing it until the end" and an equally dejected Coughlan added "We don't usually lose semi finals in Thomond Park so ya it's hard to take. We made too many mistakes, we left ourselves and everyone that was here today down. But we just need to re-group and move on from it." 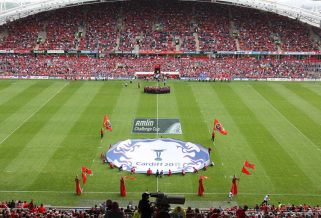