Conditions are predicted to be ideal for the Munster versus Glasgow Warriors RaboDirect PRO12 clash tonight at Scotstoun (8.05) where the home side are expecting their biggest crowd of the season.

And the expectation among the home supporters will be of victory for their side to copperfasten their place at the top of the table and take a step closer to a home semi-final.

For Munster it’s a simple case of win or see the glimmer of hope for a place in the play offs finally doused. They haven't had the best of starts to this trip, flight delays meaning the Cork based players not getting to their team hotel until 1.30am.

The presence of Paul O’Connell had a galvanising influence last week but with all due respects to Connacht, the Warriors are better equipped to limit his influence and this will be a serious step up for him and his team-mates from last week.

Donnacha Ryan, Peter O’Mahony and Conor Murray have been left at home, kept presumably to be fresh for The Stoop on Sunday week and that means their positional colleagues tonight are all auditioning for a place in the Heineken Cup quarter final match day squad.

And as preparations go Rob Penney couldn’t have asked for a better one. This is a Glasgow side, in a rich vein of form who can drop in internationals backs Ruaridh Jackson, Stuart Hogg, Sean Maitland and Sean Lamont into a side who were desperately unlucky in Dublin last weekend. They've won their last five matches in all competitions at Scotstoun since losing 6-9 to Castres in the Heineken Cup in December and make no secret of their ambition to claim one of the two spots that will give them a home semi final.

So Munster need to ratchet it up a good deal further than last week if they’re to keep themselves in the hunt for the play-offs as well as heading for London in good heart.

Munster’s slim hope of a place in the RaboDirect PRO12 play-offs was probably ended when they were emphatically beaten in Scoutstoun Stadium on Friday evening.

And events in the opening half gave no indication of the fate that was to befall them even if they trailed 20-14 at the break.

In that opening half they gave away two intercept tries, the first in the opening minute, yet showed enough control and composure to lead early in the second quarter thanks to tries from Casey Laulala and Dave Kilcoyne both converted by Ronan O’Gara who had a major influence until his departure in the 57th minute.

But then, attempting to run a ball from inside their own 22, the coughed up another intercept for livewire scrum-half Nikola Matawalu to race in under the posts.

Ruaridh Jackson converted and landed two late penalties to leave Munster trailing a half they should have won.

O’Gara narrowed the gap just nine minutes after the restart but seven minutes later Jackson raced in for a third try and having added the extras landed a penalty for 13 point lead.

Replacement Mark Bennett heaped further misery on the visitors with a 68th minute try and just after, Stuart Hogg used his blistering pace to score a fifth.

Doug Howlett squeezed in at the corner for a try that needed confirming by the TMO but the Warriors weren’t done with and John Barclay ended the scoring with a try just before the end. 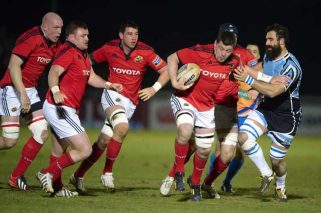