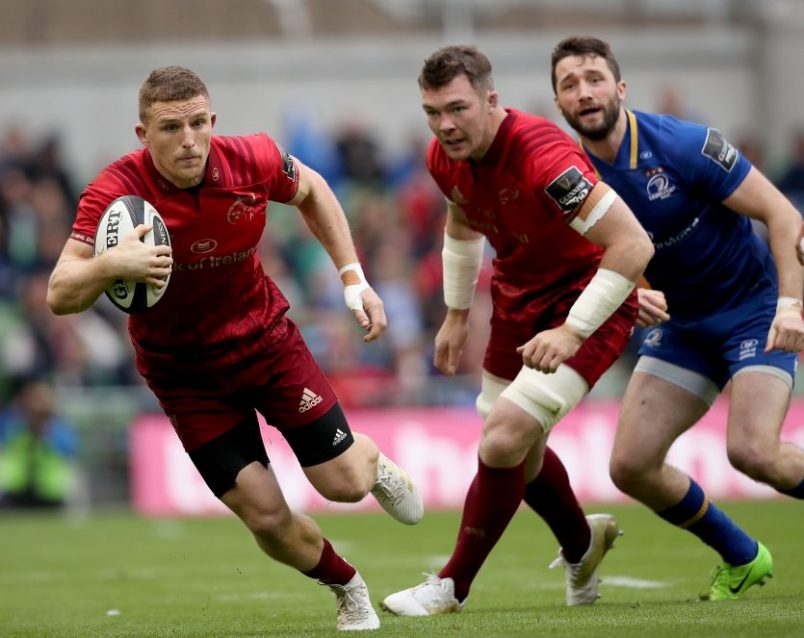 Andrew Conway and Peter O'Mahony in action against Leinster earlier this season.

The Munster side to face Leinster in tomorrow afternoon’s Guinness PRO14 semi-final at the RDS Arena has been named by Head Coach Johann van Graan.

There is one change to the starting XV that defeated Edinburgh in the semi-final qualifier at Thomond Park two weeks ago as John Ryan comes into the side at tighthead prop.

Hooker Rhys Marshall, a try-scorer in the Edinburgh win, is set to make his 50th appearance for Munster in the clash.

Simon Zebo starts at full-back with Andrew Conway and Rugby Players Ireland Players’ Player of the Year Keith Earls on the flanks.

Rory Scannell is partnered by Sammy Arnold in the centres with the half-back pairing of Conor Murray and JJ Hanrahan also unchanged.

Ryan joins James Cronin and Marshall in the front row as Jean Kleyn and Billy Holland team up once again in the engine room.

Munster Lose Semi-Final To Leinster By A Point 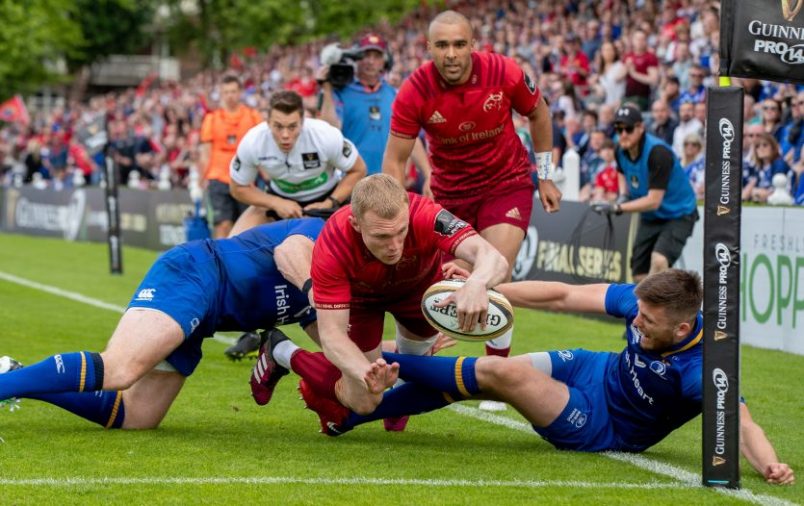 Munster fell to a 16-15 Guinness PRO14 semi-final defeat at the hands of Leinster at the RDS on Saturday afternoon with the hosts progressing to the Aviva Stadium final next Saturday.

Keith Earls and Gerbrandt Grobler touched down for Munster in the second half with JJ Hanrahan kicking a penalty and Ian Keatley a conversion for Johann van Graan’s side but it wasn’t enough.

Leinster took the lead after eight minutes thanks to a Jack Conan try under the posts after the hosts’ first real period of pressure with a James Lowe offload setting the number 8 away.

Munster were dealt an early blow when Jack O’Donoghue sustained a leg injury after superbly hauling down James Ryan with Robin Copeland replacing the Waterford man after 10 minutes.

Leinster looked dangerous in possession but Munster were defending well with Earls and CJ Stander both winning important penalties at the breakdown and captain Peter O’Mahony making a steal at the front of the lineout.

Munster were off the mark on 18 minutes thanks to a Hanrahan penalty after Leinster were penalised at the breakdown as the visitors built up a head of steam and there were four points between the sides.

Leinster led by seven once again when Ross Byrne landed a penalty before a magnificent try-saving tackle from Sammy Arnold in the left corner prevented Lowe from going over for a second Leinster try.

Munster attacked again but Hanrahan’s long-range penalty drifted wide with the visitors piling on the pressure as the half drew to a close but the Leinster defence held firm.

Jean Kleyn was sent to the sin bin on 36 minutes for an illegal clearout at the ruck as 14-man Munster trailed 10-3 at the break.

Munster started the half brilliantly, winning two turnovers and then scoring a much deserved first try as Earls finished superbly in the left corner.

Simon Zebo made the telling pass out wide and Keatley, on for the injured Hanrahan at half-time, was narrowly off target with the touchline conversion and the Leinster lead was cut to two points with 43 minutes gone.

Byrne pulled a penalty wide after Leinster won a scrum penalty and Munster were then unlucky to be penalised yards from the Leinster line before the hosts got the upper hand in another scrum but Carbery hooked his penalty wide.

Munster had a great chance to score a game-leveling try when Conor Murray kicked a penalty to within five yards of the Leinster line but the hosts’ defence were up to the task once again.

Leinster looked to have wrapped up the win when Carbery struck over a penalty when Munster were penalised in the scrum to give Leinster a 16-8 lead with 76 minutes played.

But Munster weren’t done yet and replacement Grobler touched down off the base of the posts with Keatley converting to make it a one-point game as just over a minute remained.

One last attack from deep was launched by Zebo and Earls in the final play and they very nearly broke through the last line of Leinster defence but the hosts managed to win a turnover near halfway to clinch the win.

Munster end the season having reached the semi-final stage of both the Champions Cup and Guinness PRO14.

Jack O’Donoghue and JJ Hanrahan both went off injured and will be assessed by the Munster medical staff.

Rhys Marshall made his 50th Munster appearance in the clash. 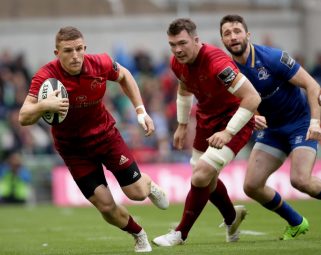