Munster Will Have To Stand Up And Fight

The heavy overnight rain in Montpellier continued into the morning but its forecasted to clear by the time the teams run out at the compact Stade de la Mosson (6pm local).

But the rain did little to quell the enthusiasm of the Munster supporters who continue to arrive in the city for the semi final clash with Clermont Auverge. The French side are expected to have the majority support in the stadium with a convoy of 200 coaches reported approaching from Clermont today.

The Munster squad's visit to the stadium yesterday was preceded by a media conference attended by coach Rob Penney and captain Paul O'Connell. When asked what Munster needed to do to win this game Penney reckoned they'd need to improve at least 20% from the Harlequins game while O'Connell was adamant that while Harlequins were not at their best that day, Clermont would not produce a no-show this evening.

And that means Munster players will have to play out of their skin for every second of every minute they're on the field and then as in any contest hope for a rub of the green here and there.

Much have been made of this Clermont side who are odds on favourites to advance to the final even though the game is being played three hours from their own patch where they are unbeaten in 59 consecutive games.

They boast a side that's a Who's Who of world rugby assembled at a cost that no club outside France could even remotely dream about. And it's an open secret that they have targetted this competition after losing in the semi last season.

Sometimes it's hard to know where Munster dredge their belief from but there are resonances with that famous trip to Bordeaux some 13 years ago when the then Declan Kidney, Niall O'Donovan coached side conjured a win against all the odds.

The weather today will be a little kinder. The challenge much crueler. But they can be relied on to stand up and fight.

Just as they’d done in the quarter final at The Stoop, Munster produced a massive second half performance against Clermont but came up agonisingly short in the Heineken Cup semi final in Montpellier.

They trailed 13-3 at half time and then 16-3 shortly after the restart when Morgan Para landed his fourth successful kick but then not alone held the French side scoreless for the rest of the game but scored a 59th minute try through Denis Hurley that was superbly converted by Ronan O'Gara to leave just a score separating the sides.

And they almost scored a second try when Felix Jones was first to a clever kick into the Clermont 22, that Casey Laulala just knocked forward as he attempted to gather for a score.

They also had a close in lineout opportunity in the closing minutes but maybe the best chance of a winning try came as they won a turnover to fashion a break out from their 22. But with a huge numerical advantage, Paul O'Connell's pass was adjudged to be forward by referee Nigel Owens. Very few in the stadium or watching on television agreed with the Welsh official.

Afterwards O'Gara expressed his disappointment with the outcome but accepted that the better side won while O'Connell said that they'd given Clermont too much of a head start.

O'Gara kicked Munster into the lead with a penalty in the 6th minute but that lasted all of two minutes before Napolioni Nalaga sliced through the Munster midfield to score under the posts. Clermont had other opportunities but failed to convert and it was left to Parra to keep the scoreboard ticking over for them.

Just before the break Munster laid siege to the Clermont line under the posts but came away with nothing, the home side more than a little fortunate not be penalised for side entry.

The second half was dominated for large parts by Munster whose back row of Peter O'Mahony, Tommy O'Donnell and James Coughlan were outstanding and O'Gara set the Munster pulses racing when his delightfully threaded through ball was seized on by Hurley, O'Gara's nerveless conversion leaving just six points separating the sides.

He engineered two close in line-outs with excellent touch finds but Clermont resisted one drive while the second was spoiled by an overthrow.

Munster's last chance went with that controversial forward pass and the game ended with another penalty against Munster that was booted gleefully into the stands. 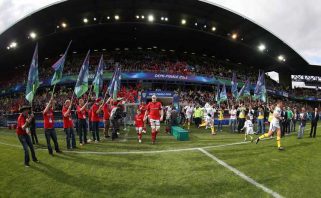 Munster Will Have To Stand Up And Fight