Munster Hold The Whip Hand At The RDS 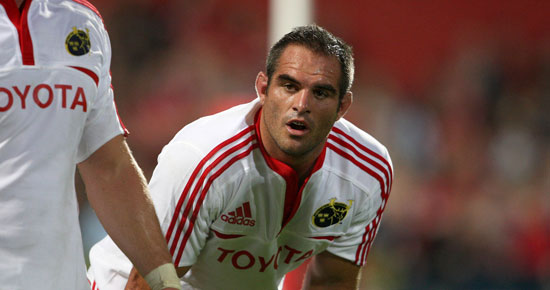 Two tries, in a second half they dominated, gave Munster an 18-0 win over Leinster at the RDS.

They led three nil at the break thanks to a Ronan O’Gara penalty after Felipe Contepomi had missed three in a row. Then O’Gara added a second penalty in the 57th minute and then Justin Melck score their first try in the 69th minute before Doug Howlett collected O’Gara’s delightful grubber to score under the posts.

O’Gara was wide with a drop-goal after a minute of play before Leinster took up station in the Munster half of the field. They failed however to convert any of their penalty chances and never threatened Munster’s line once. A superb 80 metre touch find by Keith Earls set up play five metres from the Leinster line and from the ensuing lineout, after O’Gara had just failed to find Jerry Flannery with his now trademark crossfield kick, the out-half tapped over a penalty after Contepomi was pinged for coming in from the side.

Just three points ahead at the break, Munster continued to create the chances, Earls’ chip and chase causing all sorts of mayhem in the Leinster defence and ultimately the pressure forced Leinster to concede the penalty and O’Gara was happy to take the points for a six point lead.

At no stage did it seem that their slender advantage wouldn’t be enough but the game was made safe for Munster when Ian Dowling countered from his own 22 and when Donncha O’Callaghan supplied quick ruck ball, O’Gara, Rua Tipoki and Lifeimi Mafi combined to set Earls scampering down the left touchline. Contepomi nailed the youngster but he popped a delightful pass to Melck and the South African thundered for the line, his momentum carrying him over when Girvan Dempsey did finally manage the tackle.

Munster could have been forgiven if they had opted to run down the clock and their defensive organisation was more than capable of doing just that. But if anything they upped the pace and ran Leinster ragged, helped to no small extent by the introduction of Alan Quinlan in the 56th minute and Peter Stringer in the 73rd.

Their industry was duly rewarded when O’Gara threaded through a lovely grubber and Doug Howlett came from deep to collect off the ground and crash over under the posts.