Munster Have It In Safe Keeping By Half Time 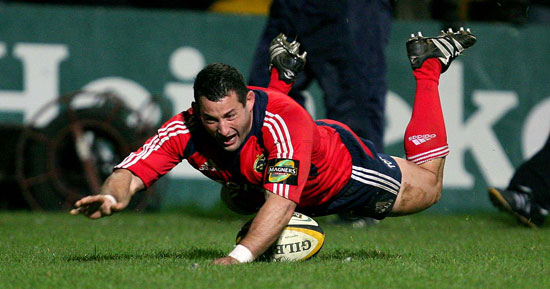 Five first half tries from Peter Stringer, Donnacha Ryan, Kieran Lewis, Frank Sheahan and Federico Pucciariello had Munster 33-12 in front at half time in their Magners League clash with Newport Gwent Dragons at a packed Musgrave Park.

They added two more in the second half through Brian Carney and replacement Rua Tipoki to run out 45-19 winners, the Dragons third try coming from Jamie Ringer.

To their credit, the Dragons always looked dangerous with ball in hand and they punished Munster mistakes ruthlessly, their opening half tries coming from full-back Martin Thomas in the 14th minute and Richard Mustoe in the 28th. Again, in the second, when they trailed 38-19, it needed massive Munster defence to prevent them scoring a bonus point try.

Donnacha Ryan making his first Magners League start of the season was named the Toyota Man of the Match and rightly so but he had close contenders in Niall Ronan who had an outstanding game while Mick O’Driscoll, Alan Quinlan and Tony Buckley weren’t too far behind. And with the Dragons always dangerous in the loose, Kieran Lewis was immense in defence and took his try superbly while Denis Hurley once again looked a little bit special.

Paul Warwick missed an early penalty opportunity but overall had a fine game, his line kicking superb and he opened his account when he added the points to Stringer’s opening try which came when first Anthony Foley, then O’Driscoll and Ryan had been stopped short.

The Dragons showed their menace shortly afterwards when Michael Owen’s sharp short pass put full back Martin Thomas over and his namesake out-half Aled converted to tie the game.

The Munster pack took the initiative to regain the lead, Ryan diving over from close range and then it was the turn of the backs with Hurley breaking the gain line out wide and then delivering a great off load in the tackle to Lewis who showed great pace to score try number three.

Try number four from Frank Sheahan had it’s origins in pack power and it was another pack inspired move that led to try number five just before half time. This time it was Buckley who made the initial surge, his pass finding Quinlan and the Tipp man delivered a delightful one handed off-load to the supporting Pucciariello who had the luxury of being able to ignore Carney on his outside en route to the try line.

Out of sight at the break, they had to survive an early out of second half pressure from the Dragons but when they lifted the siege Ryan popped up wide on the right to deliver the scoring pass to Carney.

Dragons to their credit continued to play rugby and might consider themselves unlucky not to have collected a try scoring bonus. Then right at the end, Warwick blocked an attempted clearance, collected the loose ball and then delivered a beautiful long flat inside pass to give replacement Tipoki a clear run-in.