Munster Grind Out Another Victory 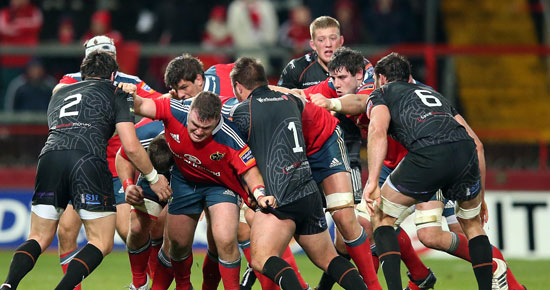 Munster overcame a dogged Ospreys effort at Thomond Park to move back to the top of the RaboDirect PRO12 table.

Glasgow Warriors had briefly moved above Munster after their win over Connacht earlier on Saturday but four penalties helped Munster back to the summit.

Rob Penney made eight changes to the side that beat Glasgow last week with Damien Varley handed the captaincy and the hooker was central to a fantastic forward effort that was crucial to this hard-fought victory.

It was Varley who made the first meaningful break when he burst through weak Ospreys defence with Ian Keatley eventually knocking over a penalty from just outside the 22 after an Ospreys infringement in the scrum after 5 minutes to make it 3-0.

Soon after, Ospreys’ Aisea Natoga was almost released down the blindside but a solid covering tackle by full-back Felix Jones halted the Fijian winger’s progress.

Munster were on the front foot again when Dave O’Callaghan charged down Tito Tebaldi’s box kick and when Ospreys’ flanker Joe Bearman was caught coming in from the side Keatley slotted over to make it 6-0.

Ospreys halved the deficit almost immediately with Matthew Morgan kicking an easy penalty after Munster indiscipline in front of their own posts.

Ivan Dineen almost scored the game’s first try just before half-time when he stepped inside Andrew Bishop to touch down after Munster won the ball from an Ospreys scrum but the try was ruled out by the TMO who decided that the scrum had not been completed with the decision met with loud boos from the Munster support.

Another rampaging run by Varley at the start of the second half had Ospreys under pressure again and when Dave O’Callaghan seized on Scott Baldwin’s overthrown lineout it looked like the first try was imminent but Duncan Williams’ pass was intercepted and Ospreys cleared the danger.

Moments later the TMO had another decision to make when Tebaldi looked to have stretched over the line despite Varley’s tackle but it was ruled no try for not releasing the ball in the tackle and Munster clung onto their lead.

On 56 minutes Munster went further in front when some great work at the breakdown by Varley forced Richard Fussell to hold on and from just inside the Ospreys’ half Keatley made it 9-3.

JJ Hanrahan was introduced for Keatley after 64 minutes and he made it 12-3 four minutes later with a well struck penalty from the right after Johne Murphy was taken out after his own kick through.

A late penalty from Morgan rescued a deserved losing bonus point for Ospreys after some late pressure on the Munster line but Rob Penney will be glad his defence kept their line intact and moved back to the top of the table. 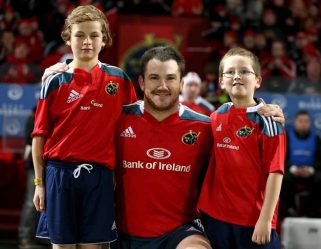