The Points That Matter

When you strip away the hype and the hoopla associated with Munster and Leinster clashes, tonight’s Magners League encounter is all about points as both sides strive for a home semi final in Mid May.

Of course Munster would dearly love to arrest the slide that has seen their arch rivals enjoy supremacy in recent times but the prime focus is on securing a home semi-final and a win tonight is crucial in that regard, no matter now comfortable a lead it might appear they enjoy.

Ulster, after their win last night, are eight points adrift as will Leinster be if they win this evening. And Munster have two trips to Wales before their final game here against Connacht.

So there's a long way to go yet before the semi-finalists are decided but things will be a lot clearer come nine o'clock tonight.

Tony McGahan runs with a bold selection, young Conor Murray at scrum-half ahead of Peter Stringer, Felix Jones at full back in place of Paul Warwick and Donnacha Ryan at blindside with Denis Leamy on the bench.

But all hace impressed in recent games and there is the feeling that McGahan's faith may find its reward.

Leinster supporters, – supporters mind, not the players – will trickle into Limerick with 'Six in the Sticks' tripping from their tongues, gladly trotting out the undeniable recent record but there has never been much separating two fine sides in recent times. In the last three games there was just one try scored, that by Leinster who of course went on to win.

Tonight though, it will be decided by a series of Ifs and What Ifs.

First off however, forget the, What if Leinster have one eye on next weekend's European quarter final – They don't.

But if Munster gain parity up front and their set piece continues to improve as it has over the last number of games then contrary to opinion inside the Pale, Munster have the wherewithal in the backs to make it count.

And when Leinster are in possession, if Munster can curtail the threat posed by Isa Nacewa and the mercurial Brian O'Driscoll, then it'll be easier to close the deal.

But here's an If you can bank on.

If both sides bring their best game to Thomond Park Stadium this evening, those fortunate enough to be there, will witness as good a game of rugby as has been seen all season (the Canterbury Sharks Twickenham Super 15 excepted).

Until maybe these sides meet again in the knock-out stages ? 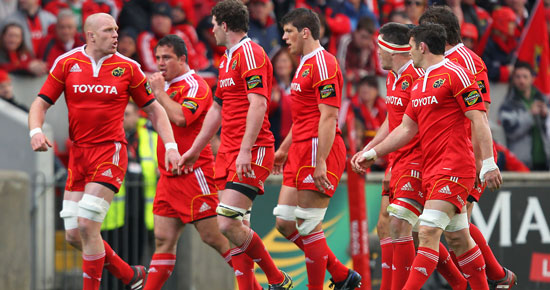 When Munster went in at half time in Thomond Park Stadium trailing 20-9 they were looking down the very long barrel of a gun. However they delivered a second half performance that justly delivered the narrowest of victories over their great rivals.

They owed much to their pack who recovered from the loss, early in the second of the talismanic Paul O'Connell, and the majestic Ronan O'Gara whose last minute penalty secured a 24-23 victory that leaves them 12 points clear at the top with three games remaining.

Leinster supporters can carp all they want about referee Andrew Small and the influence his 15 penalties against their side had but that would be to ignore the fact that having played second fiddle in the opening half, Munster dominated a second, restricted Leinster to one score and never gave them a sniff of the tryline.

In the end, trailing by two, Munster were hammering away at the Leinster, experiencing fierce resistance, but managed to force the penalty to give O'Gara the opportunity to snatch the win. Cometh the hour, cometh no better man, and the Corkman, from close to the West Stand touchline stroked it nervelessly through the posts.

It just remained for Munster to retain their composure claim the restart and dispatch the ball out of the stadium.

It was an outcome that many, outside the team itself, would have predicted at the end of the opening 40. Leinster led at that stage thanks to five Jonathan Sexton penalties and a try in the 21st minute from Shane Horgan engineered by a searing Isa Nacewa break and then kick to the corner.

And Leinster were full value for that lead having dominated for almost the entire period and started the second half facing 14 after Johne Murphy had been yellow carded in the 35th minute.

O'Gara, mercilessly targeted by the Leinster heavy brigade, departed in the 41st minute to have an eye wound treated and he was followed by O'Connell five minutes later with a serious looking ankle injury. But while O'Gara was off Paul Warwick kicked a penalty and moments after O'Gara returned he landed his fourth successful kick to leave Munster trailing by five.

Mick O'Driscoll slotted in impressively for his injured captain alongside the tireless Donncha O'Callaghan and the Leinster pack were finding their hands full coping with the marauding runs of Damien Varley and the excellent James Coughlan.

Two more penalties, the second a monster from the halfway, edged the home side in front, much to the delight of their vocal supporters but Sexton handed the advantage back to Leinster when he converted his sixth penalty with fifteen minutes remaining.

The groan that went up when O'Gara pushed his 68th minute penalty right and just wide was likely heard in Cratloe but by now Munster tails were up and they had Leinster nicely corralled deep in their own territory.

With time running out, the men in Red laid siege to the Leinster line and in fairness that defence was impressive. It almost begged for O'Gara to drop into the pocket and go for the drop-goal.

But Munster and the man himself seem to delight in dramatic finishes and when they spurned the drop goal option and went wide left, Keith Earls forced the penalty and O'Gara kept that admirable nerve of his. 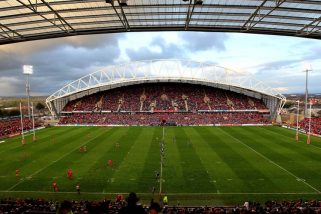 The Points That Matter