If Ulster’s unbeaten start to this season’s RaboDirect PRO12 is to come to an end it’s likely to happen at Thomond Park Stadium this evening.

Because they bring to Thomond Park Stadium what is a largely a second string squad, fifteen of whom featured in the Ravens British & Irish Cup squad a fortnight ago

Six of the side Mark Anscombe starts this evening, were starters on that occasion, while two more – Rob Herring and Adam Macklin – came off the bench in that B&I Cup game against Cardiff that Ulster won by 26 points.

Of that octet, only one, Neil McComb, started against Leinster while Callum Black, Niall O'Connor and Herring, got one, three and seven minutes of action respectively that night.

Rob Penney has made three less changes than his countryman. And in three of the eight he's made, one is positional, three involve returning internationals, another sees the return of Doug Howlett to the right wing after a little niggle kept him out of the Connacht game while he rotates his front row as he has been doing all along.

So in many ways his side is on a hiding to nothing against a visiting side who can of course play with total abandon in conditions, if they persisit, that will be ideal for them.

As expected, Munster brought Ulster’s unbeaten start to the RaboDirect PRO12, to an end with a 24-10 win in a wet and windy Thomond Park Stadium.

And it was a victory far more conclusive than the final scoreline suggests, Ulster's seven pointer coming in added time in the last play of the match.

Munster led 10-3 at half time with a 32nd minute penalty try awarded by Alain Rolland after the Munster scrum shunted the Ulster 8 backwards three successive times five metres from the Ulster line.

And as early as four minutes into the second half the outcome was put beyond doubt when Simon Zebo took full advantage of a stand-offish midfield defence to breeze through for a try.

The prospect of a bonus point win looked entirely probable when, five minutes later, Peter O'Mahony ended a sustained bout of Munster pressure with a try to the right of the posts, Ian Keatley continuing his 100% kicking return with a conversion for a 21 point lead.

But the bonus try never materialized as error crept into the Munster game and in fairness, the Ulster boys applied themselves admirably to their defensive duties. And again to their credit the young Ulster side engineered a right at the end for replacement Stuart Olding.

Perhaps the best opportunity for a win bonus came in the final quarter when Zebo raced onto a trademark Ronan O'Gara – on for Downey in the 50th minute – crossfield kick but the bounce was wicked and the chance lost.

Afterwards, coach Rob Penney admitted that, "had we been offered that result this morning we'd have taken it. But now, with three tries in the bag and a half hour to play, we'd be a wee bit disappointed not to have taken a win bonus."

Nevertheless, his squad continue to build momentum as they head into the New Year with the Blues game on Saturday in Cork followed by the last two European group games. 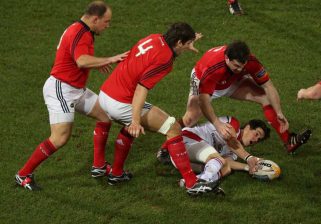