Munster End On A High Note 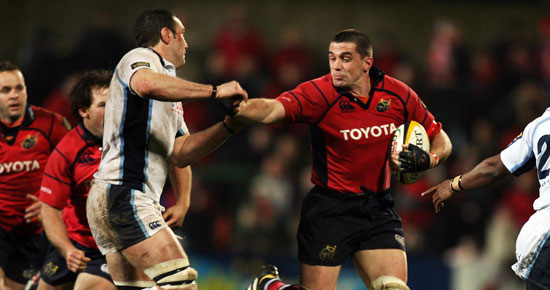 Playing their 27th game of the season and showing just two changes from the side that started in Edinburgh last weekend this final outing provided a satisfactory first Musgrave Park start for full back Denis Hurley who never put a foot wrong as Munster ended Glasgow Warriors quest for a five-in-row with an emphatic 38-20 victory.

Munster opened with a superb Lifeimi Mafi try that had it’s origins in a Warriors assault that almost yielded a try but then saw a piece of Ronan O’Gara magic turn desperate defence into awesome attack. After Glasgow had spilled the ball with the line at their mercy O’Gara’s neat chip was collected by Federico Pucciariello who offloaded to Mick O’Driscoll. The big second row found the ever present Alan Quinlan and he delivered the scoring pass to Mafi who had 65 metres to cover which he did effortlessly.

A blockdown of an O’Gara’s kick took play into the Munster 22 and they yielded a penalty to Dan Parks. Minutes later Parks delivered an inch perfect crossfield kick that was superbly taken by wing Thom Evans but Mossy Lawlor smashed him into touch to prevent a certain try.

Munster once again took the initiative, Mafi again showing good speed and even better step and Quinlan once again in support to stretch out and get the touchdown
O’Gara added the conversion and then boomed over a penalty from halfway in injury time to leave Munster 17-3 in front at the break.

Parks knocked over an early second half penalty but then we had the try of the game when Hurley made good ground from deep, switched inside to Lawlor who in turn found Tomas O’Leary galloping up in support and when the scrum-half was eventually hauled down, who else was on hand to complete the move but the outstanding Clanwilliam man Alan Quinlan If Glasgow’s goose wasn’t cooked at that stage it certainly was in the 60th minute with the yellow card awarded to Scott Barrow and there was a further try for Denis Leamy before Warriors mustered two late converted scores. But Munster had the final say, replacement Shaun Payne pouncing on a kick through and Jeremy Manning landing the difficult conversion from wide on the right.