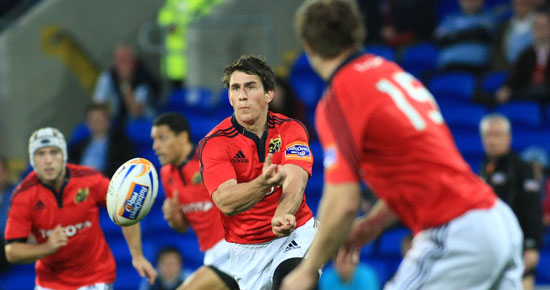 Munster will not have to cope with the considerable talent of Casey Laulala this evening when they take on Cardiff Blues in Thomond Park Stadium (7.05).

Their soon to be teammate has not been named in the match day squad after he picked up a slight injury in the game against Ulster last weekend.

However, there is one Gavin Henson named in the Blues backline and Henson's dancing feet will ensure that Munster midfield backs will have to be on their mettle this evening.

Nor will the threat from the Blues be confined to Henson & Co.

Up front the presence of the likes of Paul Tito, Martyn Williams and Maama Molitika means that Mick O'Driscoll's pack will need to win those tight exchanges if they're to build on their good start to this final stage of the RaboDirect PRO12.

But Munster do have the wherewithal to cope with the challenge and their lively backline will be relying on their beefier buddies to provide the type of ball that will allow them do damage.

It's not likely to be a try fest, more probably a game that'll be won in the trenches but this Munster squad have shown they're willing and able to win games that way if needs must. 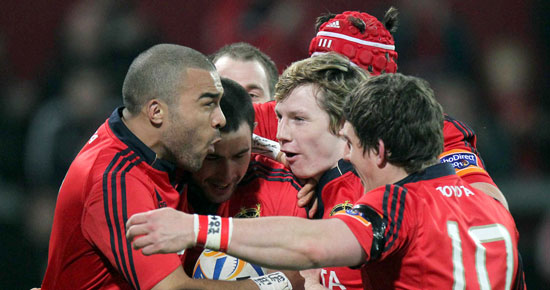 Munster laid down a marker in the race for the RaboDirect PRO12 play-off places as they held off a spirited fightback from Cardiff Blues to triumph 16-13 at Thomond Park.

Just four points separated the teams before kick-off but a dominant first-half performance helped the reigning champions open a gap between themselves in third and the chasing pack.

Ian Keatley kicked 11 points in the first half with full-back Felix Jones crossing for his first try since the foot ligament injury that ruled him out for seven months to give the hosts a 13-point advantage.

The second half however was a completely different story as the Blues came roaring out of the traps scoring through Richard Mustoe but, despite some huge pressure towards the end, Munster held on.

Having won three times in the league on the road the real test of the Blues' credentials was always going to come at Thomond Park.

They did show flashes of brilliance in the first half – Chris Czekaj was just hauled down by Simon Zebo after a great combination between Dan Parks and Gavin Henson.

There was also some great work by veteran flanker Martyn Williams who showed no signs of slowing down in his hunt for turnovers at the ripe old age of 36.

But after Parks gave them the lead in the fifth minute, it was virtually one-way traffic for the rest of the half. Fly-half Keatley kicked three penalties as wave after wave of pressure from the Munster forwards, especially in the scrum, wreaked havoc on the visitors.

The try was a beauty. Good lineout ball saw Munster shift the ball from right to left and back again before Simon Zebo latched onto Mick O'Driscoll's inside ball, sprinted clear before feeding a superb ball for Jones to race away for a converted score.

A mistake by Parks shortly after nearly let in Zebo but fortunately for the former Scotland fly-half the ball hit the corner flag before the winger grounded the ball.

The relief was temporary as a ferocious Munster scrum anchored by the outstanding BJ Botha saw the Blues front row disintegrate allowing Keatley the opportunity to round off the half with a penalty but for once his radar was off target as the hosts went in 16-3 ahead.

The Blues made a bright start to the second half but Michael Patterson was smashed into touch when they threatened down the left.

Their perseverance was rewarded on 46 minutes when Henson sliced through the Munster line with after picking a devastating line.

With the red defence scrambling, the Blues expertly shifted the ball down the backline with Czekaj providing the scoring pass for Mustoe to touch down. Parks kicked an excellent touchline conversion to bring the visitors to within a score.

Munster were now reeling and Danny Barnes conceded a penalty but Parks let him off the hook while when Williams' hands lingered on the ball too long Keatley also failed with his three-pointer.

But Ben Blair, on as a replacement for Parks, showed them both how to do it by slotting a 62nd-minute penalty to reduce the deficit to just three points.

Munster, as they do so often in these situations, responded superbly in the final quarter of the game and pressure on the Blues line led to Paul Tito being yellow carded for killing the ball.

The home pack put on the squeeze from the scrum but with the line in sight they knocked on at the crucial point. However, even though Tito was not able to get back on the pitch, the Blues finished the match in the ascendancy but despite going through the phases Munster forced a turnover to clear their lines and are now seven points ahead of their Welsh rivals. 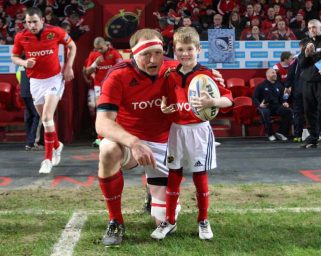