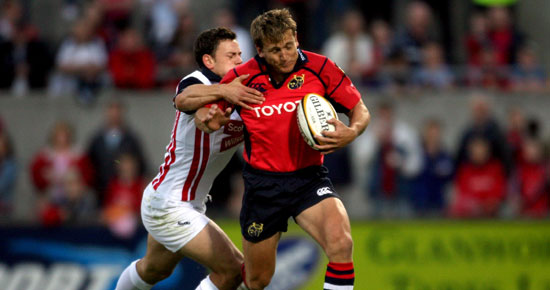 Three Jeremy Manning penalties were just enough to give Munster superiority on the scoreboard but it was the overall team performance that ensured victory over Border Reivers in the Magners League clash on Saturday in Thomond Park.

This was a Munster side that included only ten fully contracted players in the starting XV the rest of the side made up of Academy and Development personnel. And it was one of those Development players, James Coughlan, who scooped the Toyota Man of the Match award after a hugely impressive performance. Coughlan was fully deserving of the honour but would have had to beat off the challenge of back-row colleagues John O’Sullivan and debutant Tim McGann.

Out wide John Kelly played a captains role, looking Munster’s most potent threat going forward while his midfield partner James Downey had a fine game as did young Tom Gleeson who was always willing to put his shoulder to the wheel.

In fairness though, its probably unfair to mention some players to the exclusion of others because had any player not played his part, Borders would have won. That they didn’t was down to sheer determination on Munster’s part and particularly in the final quarter with the visitors a point behind after Mark Robertson had capitalised on a mistake to score the only try of the game.