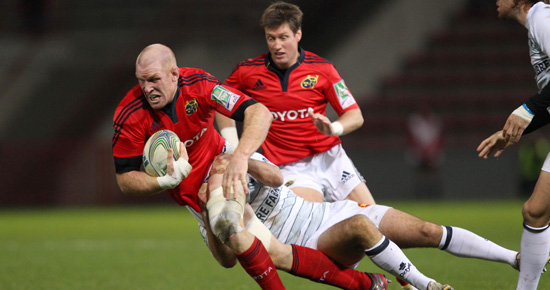 If resentment and a sense of grievance counts for owt, as they’d say in these parts, then Northampton Saints should win by the proverbial country mile in the clash later today in Milton Keynes

The utterances of their coach Jim Mallinder in the aftermath of the opening round Thomond Park Stadium defeat left few in any doubt that he felt an awful wrong had been perpetrated on the side who collapsed in the second half of last year's final and time hasn't, it seems, caused him to think differently. "Unfortunately there were a couple of decisions that didn't go our way and we didn't get the result we wanted." he's quoted as saying in today's Irish Times (John O'Sullivan) of that game in November.

And it would appear that the day of retribution has arrived for Mallinder. "We are at stadium:mk, it's a packed house and we will be looking to get our own back."

They can't really 'get their own back' in this competition because whatever transpires this evening, they're out before a ball is kicked. After that November defeat in Limerick they bombed at home against Scarlets. And against Castres so that by the time they got their own back against the Welsh side they were already directing their European ambitions Amlin direction.

It stll makes them a hugely difficult opponent this evening even despite the absence of the injured Courtney Lawes and Tom Wood and nose out of joint Chris Ashton.

But whatever the perceived difficulties and whatever the resentments harboured, Munster know that the prize of a home quarter final lies in their own hands.

A command second half performance that yielded four tries – three from Simon Zebo – saw Munster book themselves a home quarter final in this year’s Heineken Cup.

And before proceedings began this weekend, the very thought that Northampton Saints would score 36 points and lose couldn't have been countenanced, the general consensus was that Munster would do well to come away from Milton Keynes with a losing bonus, hope other results went their way and then maybe, they'd sneak home advantage in April.

And fifteen minutes into the game even that notion seemed fanciful as the Saints raced into a 13-3 lead on foot of a penalty try and two penalties from Ryan Lamb.

By then Ronan O'Gara however, had served notice of his intent and ultimate influence, landing a great penalty from the Saints 10 metre, firing out accurate passes to his wide boys and using that right boot of his to good effect whether from restart or return.

But if the first half performance was workmanlike there was wizardry in the second. The sides turned around level at 19 points apiece but Munster exploded out of the traps with Johne Murphy doing marvelously well to score after just two minutes wide on the right. Ice-cool O'Gara stroking over the conversion from close to the touchline.

Lamb booted the restart directly into touch and Munster were back in the saints red zone, a good chance going a-begging when their outstanding skipper's pass failed to find the flying Zebo.

But moments later, the passes stuck. A delightful Denis Hurley break on the right and well timed pass inside had Keith Earls sashaying into the Saints red zone. When he has grounded on the 22, Conor Murray swept the ball left and slick passing this time sent Zebo over.

Twelve points clear but still with a long time to go and not a chance of Northampton waving the white flag.

And less than twelve minutes after they'd gone twelve points behind, the home side were back in it when Romain Poite awarded them a second penalty try.

A fracas at that time saw Murray and Lee Dickson sitting out the next ten minutes- Murray replaced then by Tomas O'Leary – with Lifeimi Mafi deputising at the base of the scrum .

O'Gara and Lamb traded penalties before O'Gara pushed the gap to eight with a 68th minute penalty and the game was delicately balanced.

Saints upped the ante and were attacking with intent just outside the 22 when Zebo struck again, his interception and try finally killing the Saint's resolve.

Zebo rounded it off with his third, Munster's fifth with minutes to go and it ended with a try that would have been no consolation whatsoever to the scorer Scott Armstrong or his teammates. 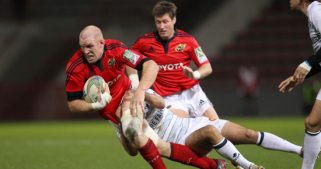