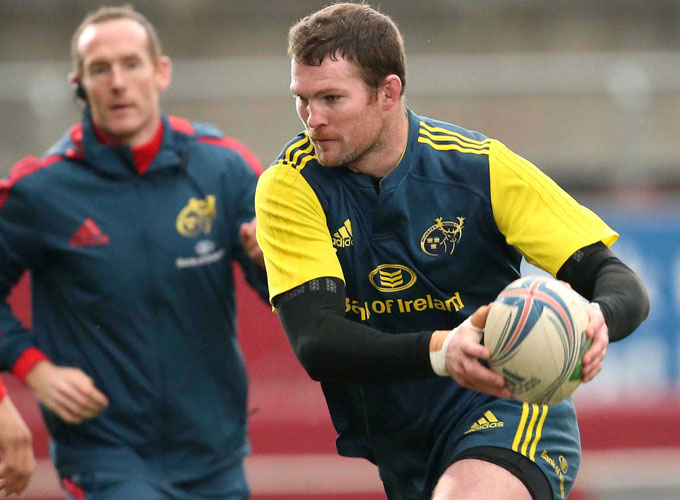 Ryan hasn’t featured for Munster since injuring knee ligaments against Gloucester in October but makes his return ahead of schedule to partner Paul O’Connell in the second-row.

There’s only one change in the backs as scrum-half Cathal Sheridan gets the nod ahead of Duncan Williams to replace the injured Conor Murray after impressing at the weekend.

Penney has continued his rotation policy with two changes in the front-row. James Cronin and South African BJ Botha replace Irish internationals Dave Kilcoyne and Stephen Archer. Damien Varley keeps his place in the side with Shannon hooker Duncan Casey hoping to make his second Munster appearance off the bench after his cameo last time out.

Ian Keatley, as expected, has recovered from the dead leg he sustained last weekend to start at out-half.

The notable inclusion on the bench is last season’s Player of the Year, Tommy O’Donnell. O’Donnell made his comeback from injury off the bench for Munster A last weekend after suffering a hyper-extension of his knee against Zebre in September. 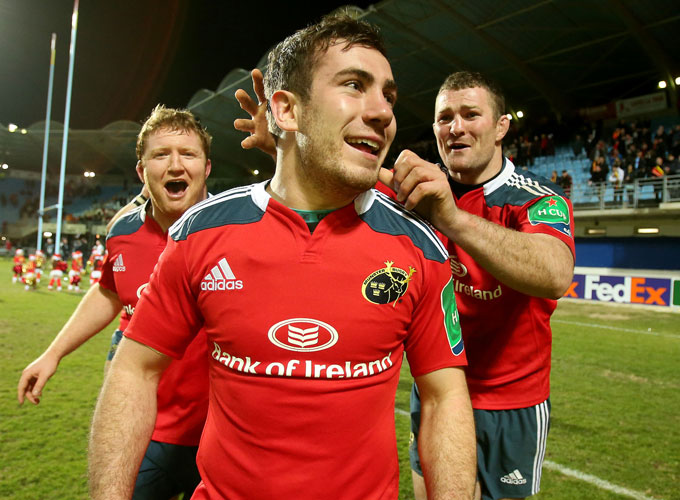 Munster produced a late moment of magic to secure a precious away win in Perpignan on Saturday evening to add another chapter to their incredible Heineken Cup history.

The game looked lost with the hosts leading when the clock ticked past the 80 minute mark but Rob Penney’s side managed to release 78th minute substitute JJ Hanrahan down the right wing and the Currow man sidestepped past Joffrey Michel to touch down in the corner to secure an incredible one-point win.

It was a tough battle in the south of France with both sides leading for extended periods but Munster showed incredible nerve to snatch a late victory from the jaws of defeat.

The win moves the province six points clear at the top of Pool 6 in the Heineken Cup ahead of Gloucester’s home tie against Edinburgh tomorrow.

Munster started the game on the front foot and thought they scored an early try through Sean Dougall but the TMO ruled the try out for obstruction by James Downey in the build-up.

Perpignan took the lead after their first foray into the visitors’ half on five minutes when the province were pinged for not rolling away and Italian international Tommy Allan, deputising for the injured Camille Lopez, slotted over the first three points.

There was no love lost between the sides with two scuffles breaking out simultaneously in the 14th minute and Munster captain Peter O’Mahony and Romain Terrain were both harshly sent to the sin-bin with the away side awarded the penalty.

Two minutes later Munster were back on level terms after Ian Keatley was on target with a difficult kick from near the left touchline to make it 3-3 after Perpignan illegally halted a rolling maul.

The Catalans moved back in front after 18 minutes when Allan made a break in midfield and advanced towards full-back Felix Jones. Jones tackled the out-half a fraction after he kicked through but the referee deemed it to be a late tackle and Allan was offered another easy penalty opportunity to move his side back in front.

The lead was stretched to six after 25 minutes when Donnacha Ryan was adjudged to have gone in the side of a ruck and Allan maintained his 100% record to make it 9-3.

Two Keatley misses were sandwiched by an Allan miss in the final ten minutes of the half as the Perpignan advantage remained six points at the interval.

Munster began the second half as they did the first, camped in the opposition half as Casey Laulala showed great hands to offload to Felix Jones who fed Johne Murphy and the winger stormed into the Perpignan ’22 before eventually being stopped by the defence.

French international Sofiane Guitone forced the ball out of Murphy’s hands and Perpignan were awarded the scrum, an area of the game that Munster dominated throughout.

After numerous false-starts, Perpignan eventually got the ball out but made a mess of clearing it with the ball going out past their own dead ball line to hand the away side a five-yard scrum.

This was the chance for the visitors to turn the screw and they showed great patience and control as they forced the hosts to concede numerous penalties before the referee final signalled a penalty try. It was a great effort by the pack with the front-row of James Cronin, Damien Varley and BJ Botha deserving a special mention. Keatley added the extras to put Munster into a 10-9 lead just short of the 50-minute mark.

The province had a let-off five minutes later when Allan missed his second penalty after a Munster infringement at the maul but they weren’t so lucky on 63 minutes when substitute Dave Kilcoyne was penalised for an infringement at the breakdown and Allan kicked his fourth penalty to make it 12-10.

The game was really on a knife edge in the final quarter with neither side able to gain the ascendancy and Munster went back in front through another Keatley penalty after 68 minutes, this time for a Perpignan obstruction in the maul, and Rob Penney's charges were one point ahead once again.

With eight minutes remaining Allan kicked a penalty inches wide after Munster dragged down a maul and it appeared that lady luck was smiling on the Irish side but then came the first twist in the tale on 77 minutes.

Perpignan had a scrum just inside the Munster half on the right wing and spread the ball across the line, full-back Joffrey Michel drew two defenders before releasing substitute Tommaso Benvenuti to run unopposed into the left corner and touch down what looked like the winning score. Allan missed the conversion but the hosts still led by four points.

Then came the second, and final, twist.

There were 65 seconds on the clock when Keatley restarted the match but the pack managed to win possession after holding up Guitone in a choke tackle with Paul O’Connell central to the effort.

From the resulting scrum, the first attempt to spread the ball wide didn't go according to plan as, not one, but two passes were overthrown and the ball went to ground but, vitally, not forward off a Munster hand.

The attack regrouped and first went left before Keatley cut back onto the right side and passed to James Coughlan who kept the move flowing with a pass to Murphy.

Murphy fed Hanrahan who popped it to Denis Hurley and he offloaded a great pass to fellow substitute Tommy O’Donnell on the touchline.

O’Donnell did superbly to step past Benvenuti and get his pass back inside to Hanrahan, who had continued his run after being involved earlier in the move.

Hanrahan had a clear run at Michel and feigned to go inside before stepping back onto the outside to leave the full-back flat on his face and dive over in the right corner to send the large band of away fans wild and break French hearts.

Keatley’s conversion came back off the post but it mattered not as the referee immediately blew up for a famous Munster win. 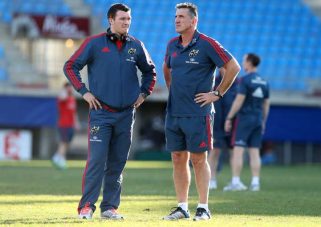 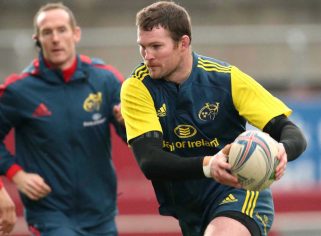