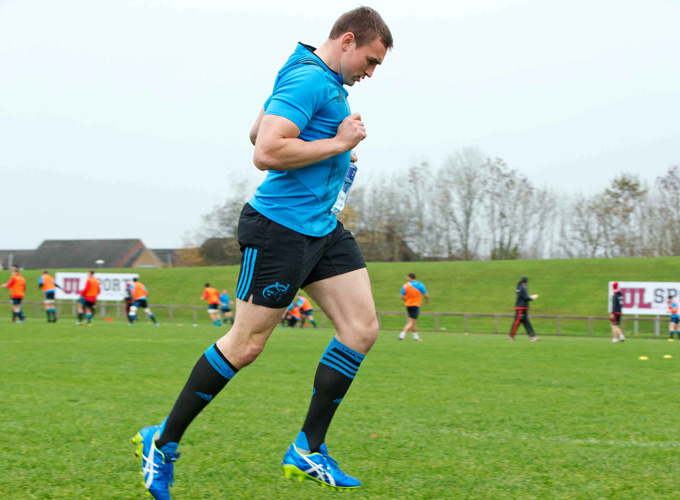 The squad has been boosted by the news that Tommy O’Donnell, Donnacha Ryan and Jack O’Donghue have all recovered from their respective knocks to take their place in the matchday 23.

One change in the front row sees Mario Sagario come in to make his first European start alongside Dave Kilcoyne and Mike Sherry while Dave Foley and Mark Chisholm continue in the second row.

Billy Holland is promoted to a start at 6 this weekend with O’Donnell and captain CJ Stander again named at 7 and 8 respectively.

As you were in the half-backs and midfield with Conor Murray and Ian Keatley, and Rory Scannell and Francis Saili all remaining in situ.

The final personnel change comes in the back three with Ronan O’Mahony starting on the left wing. Keith Earls remains on the opposite flank with Simon Zebo making the positional switch to full-back.

If sprung from the bench, Greencore Munster Academy prop Liam O’Connor will win his first senior cap for the province. The Irish U20s player has featured heavily for Munster A in this season’s British & Irish Cup, starting in three of the side’s four encounters.

Hooker Kevin O’Byrne is also included in the replacements and will make his European debut if introduced tomorrow.

On the injury front, Niall Scannell sustained a shoulder injury during yesterday’s squad session and will be monitored by Munster medical staff across the coming days.

Ticket Update.
Over 18,000 tickets have now been sold for this game. Tickets available online here or at the ground on matchday.

Munster Bounce Back In Style At Thomond 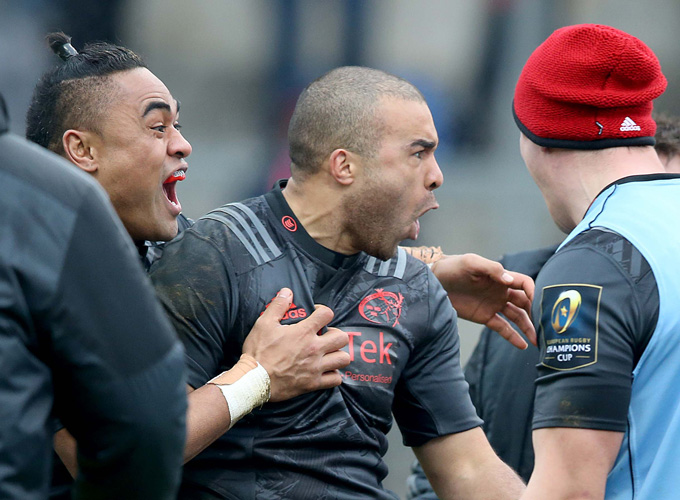 Munster laid to rest the demons of last week’s 27-7 defeat in Paris, crossing for four tries in securing a bonus point 26-13 victory over Stade Francais at Thomond Park in Round 5 of the European Champions Cup.

Mike Sherry and Keith Earls touched down before the interval and Simon Zebo added Munster’s third before Stade brought themselves back into contention with a Jonathan Ross try. However CJ Stander soon calmed the nerves of the Thomond faithful with the province’s bonus point try on 68 minutes

An off the ball obstruction handed early momentum to the visitors and Morné Steyn was on hand to draw first blood, putting Stade Francais 0-3 up with less than a minute played.

Stade continued to impose pressure on their hosts, particularly at set piece, before a long range touch finder from Ian Keatley handed Munster their first foothold in opposition territory. Different game but still the same problems persisted for Munster in the opening exchanges. After making the hard yards towards the tryline, they were pinged for holding on and again failed to execute a scorable opportunity.

However the hosts would soon hit their stride and exorcise the demons of recent weeks.

After winning a scrum penalty, Keatley opted to go down the line – a move that proved fruitful with Billy Holland cleanly taking the lineout and setting up a dominant Munster maul off of which Mike Sherry charged over for Munster's first on 18 minutes – Keatley just right with the conversion.

A scrum penalty handed Stade the opportunity to retake the lead just four minutes later but Steyn was unable to find the target on this occasion.

With a far more potent attack across the backline on this outing, neat offloading and good angles of running saw Munster ask questions of the Stade defence, yet more often than not the Frenchmen would do enough to halt the Munster advance on the 10 metre line – Foley’s charges not aiding their cause by failing to get numbers to the breakdown on occasion.

Steyn had another chance to put Stade back in front on 35 minutes when the province infringed at the lineout and this time round the South African international delivered to make it 3-6 to the visitors.

A moment of sheer brilliance was to come before the interval and that came from the electric Keith Earls. With Stade overthrowing on their own lineout, Tommy O’Donnell was on hand to pounce on the loose possession and with Munster going across the backline as far as Earls on the right wing, the speedster danced inside a number of Stade defenders before sprinting to the line. Despite being brought to ground, his momentum carried him over to touch down under the posts.

Keatley added the conversion to hand Munster a 12-6 lead at half time.

A dream start to the second half saw Simon Zebo equal Anthony Horgan’s try-scoring record for Munster (41 tries) on 42 minutes. Attacking off a lineout, Keatley opportunistically spotted the Stade defence coming up fast and the Munster playmaker kicked beautifully over the Frenchmen for the oncoming Zebo who ran in under the posts.

Keatley also slotted the conversion and Munster were out to a 19-6 lead.

Munster were reduced to 14 men when Ronan O’Mahony was adjudged to have taken Hugo Bonneval out in the air, but, much like it had done for Stade in Paris last weekend, it added a spring to Munster’s step, the hosts nullifying the attempted Stade onslaught from the resultant penalty and instead found themselves on the attack within the Stade 22.

Accidental offside ended that attack, but Muster’s ever growing ferocity from 1 to 15 saw them persistently win back possession via the breakdown, choke tackle and forced Stade knock-ons. Stade’s period with the extra man ended fruitless.

However, miscommunication at lineout time cost Munster dearly on 63 minutes when Jonathan Ross pounced on loose ball, and with the Munster defence not set, it was all too easy for the Stade openside as he touched down for the visitor's first try with Steyn converting to make it a tense 19-13 scoreline

But Munster’s reply was swift and winning turnover ball on the Stade lineout was their first step to finding themselves back in the opposition 22. Going across the across the backline from left to right, Zebo made the initial surge to the tryline where the visitors failed to roll away at the breakdown.

Conor Murray opted for the quick tap and go and a couple of phases later captain CJ Stander was over for Munster’s bonus point try and from there Anthony Foley’s men held out to record a deserved 26-13 win in front of a vocal home crowd in Thomond Park.

Meanwhile, after the game… 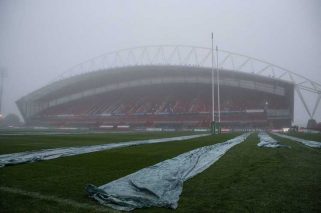 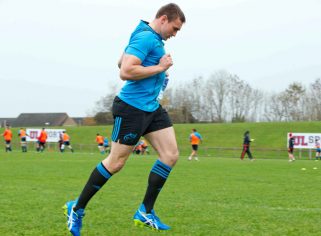