Must Win Game in Musgrave

On the evening that Donncha O’Callaghan wins his 200th cap, Munster find themselves in a must-win RaboDirect PRO12 game against fellow play-off contenders Glasgow Warriors.

Munster and Glasgow, on 56 points apiece, Ulster, one point behind on 55 and Scarlets (51) are effectively chasing the two remaining play off places (Leinster secured one 'home' spot last night and Ospreys are odds-on for the second).

Both of tonights sides wind up with a difficult away and home schedule, Warriors away to Treviso then home to Connacht while Munster must travel to Parc Y Scarlets before hosting, whisper it, Ulster, in their final game.

And neither should allow themselves to be distracted by earlier events in Galway where Connacht host Ulster (5.15 ko).

This evening, the momentum is unquestionably with the visitors. They are undefeated in their last six matches in the RaboDirect PRO12 and furthermore have only been beaten once, 16-14 away to Scarlets, since mid September.

Injury accounts for three of the six changes Sean Lineen makes to the side that thumped Cardiff Blues last time out but there's a return at number 8 for Johnnie Beattie, in in place of Ryan Wilson.

Seven of those who were involved in the 23 against Ulster last weekend are unavailable to Tony McGahan through injury and that might, in a perverse sort of way, act in their favour, helping to negate the hangover of that defeat.

Luke O'Dea comes onto the right wing in the place of Denis Hurley (leg injury) and there's no doubt O'Dea knows how to find the tryline as he's shown in the RaboDirect before, and more recently in the Britsh & Irish Cup semi final win over Leinster.

Ian Keatley comes in for the injured Ronan O'Gara and is partnered by Tomas O'Leary, O'Callaghan teams up with another 200+ capper Mick O'Driscoll in the second row and there's a reshuffled back-row, Peter O'Mahony moving to number 8 in place of James Coughlan (broken hand) and Donnacha Ryan in at blindside wing forward.

RaboDirect PRO12 games may lack the aura of the Heineken Cup ones. And the difference in intensity was evident last weekend. So too the consequence of defeat.

But this game tonight will lack nothing in either of those areas.

In doing so they did their play-off ambitions a power of good although Warriors, Ulster and Scarlets still remain very much in contention for the two places up for grabs.

Munster came into this game reportedly nursing a Heineken Cup hangover but in truth there was little evidence of that once they'd settled into their pattern.

And, playing into a strong wind, they did that early on although falling behind to a 9th minute Ruaridh Jackson penalty.

There was greater purpose to them than the previous week, a greater urgency and after Peter O'Mahony, Mick O'Driscoll and Donnacha Ryan had made good yardage on the right, Warriors conceded the penalty and Ian Keatley drilled over the first of his seven successful kicks.

Keatley was ever willing to look for gaps in the visitor's defence as was Simon Zebo, Lifeimi Mafi and Felix Jones and they were afforded the opportunity thanks to good go-forward off a solid scrum and the surges of O'Driscoll, Ryan, Mike Sherry, Donncha O'Callghan and Man of the Match, O'Mahony.

Jones danced and piroutted over the line in the 25th minute only to be denied by the TMO but minutes later O'Callaghan – playing his 200th game for Munster – provided a superb cut out pass for Luke O'Dea to score his fourth try in five Rabo starts.

Munster conceded a penalty from the restart and Jackson fired over a riposte but Munster opened again for business with a sublime move up the Main Stand touchline involving O'Mahony initially, showing all the pace and poise of a winger, Zebo, Sherry and Tommy O'Donnell.

Once again Warriors were forced to concede the penalty. Once again Keatley lashed it over and right on half time he added the conversion to O'Mahony's try for an 18-6 interval lead. And the wind in their sails for the second half.

However, Glasgow Warriors haven't arrived at this point of the season as play-off contenders by accident and two minutes after Nigel Owens restarted their international wing Stuart Hogg scored in the left hand corner.

And five minutes later he scored there again, a Keatley penalty the meat in the sandwich of Hogg's two opportunistic tries, to see the Munster lead dramatically reduced from twelve to five.

Keatley and Duncan Weir, a 55th minute replacement for Jackson, then engaged in penalty contest that ended two apiece over a nine minute period before Keatley was again presented with an opportunity in the 70th minute that he duly converted to push his side two scores clear with ten minutes remaining.

So when Conor Murray, a 54th minute for Tomas O'Leary – playing his last game at Musgrave Park – scored in the 73rd minute there was the heady prospect of a bonus point.

That they didn't manage it but instead allowed the Scots gain one, came about as they tried to run ball inside their own half when maybe a hoof into the stands might have been a better option.

The ball went to ground and it was Hogg who hacked on to score for Weir to kick the conversion for a point that could yet prove oh so vital.

It wasn't the finish that was envisaged. Nevertheless it should not take way from what was a committed, at times classy performance, full of character and commitment. 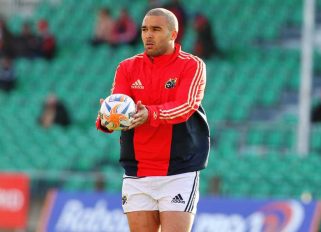 Must Win Game in Musgrave