Back To Winning Ways ?

Having come up just short last weekend in a game viewed by many as the best of the season, Munster will be expected to return to winning ways tonight in Thomand Park Stadium against Newport Gwent Dragons (8pm) in this RaboDirect PRO12 round four game.

Yes there are changes aplenty to Rob Penney's starting XV but when the new introductions include the likes of Marcus Horan, Ronan O'Gara and Peter Stringer, winning their 216th, 224th, and 226th Munster caps respectively and then internationals such as Niall Ronan, Keith Earls and Simon Zebo, the space for excuse becomes a little vacuous.

Management of player welfare while confining Casey Laulala and Sean Dougall to a watching brief allows for the seamless re-introduction of Earls and Ronan while injury to Luke O'Dea and James Coughlan sees Zebo return to the Munster fold and Paddy Butler step up from the A arena that he graced so effectively in Belfast last weekend.

Alongside 21 year old Butler is 22 year Dave O'Callaghan, named yesterday in Declan Kidney's international training squad after a string of impressive performances and Penney continues the youthful theme on a bench that includes Danny Barnes (22) and for the first time JJ Hanrahan who has just celebrated his 20th birthday.

Dragons arrive on foot of just one win, at home to Zebre on the opening day at Rodney Parade, and with a number of changes from the side beaten last time out by the Blues.

Most noticeable perhaps is the change at centre where Pat Leach and Andy Tuilagi give way to Adam Hughes and Ashley Smith and at number 8 where Tom Brown is preferred to international and Lions contender Toby Faletau.

Brown is determined to make the most of his opportunity. “My aim is to be in the same shop window as Toby,” he tells Chris Kirwan (South Wales Argus) “My first step to doing that is to take the opportunities that come my way, whether it’s when he is here or when he’s away with Wales.

“I know exactly how many minutes I’ve had so far – 26! But I’ve been trying to make the most of the little time that I’ve had on the field and I can’t wait to get my chance to show what I can do from the start."

And no better place nor opponents for Brown to showcase his talents. " We need to fight for any inches we can get. Our backs have been electric at times this season so we need to keep punching those holes to get them quick ball.

“We know that Munster will always try to bully a side – they want to beat up the forwards then beat the backs out wide.

“But we like to be confrontational and carry hard ourselves, so we have to match them physically and beat them in the contact area.”

If the prospect of seeing more tries like the two they opened with against Newport Gwent Dragons is any way real then supporters should purchase their tickets for forthcoming matches well in advance.

The buzz among the 11,000+ supporters had barely subsided when Munster conjured up another superb move that ended with Niall Ronan – having his first senior start since January – dotted down for their second try.

As with the first, Keith Earls and Simon Zebo were centrally involved. Earls making the initial serious surge on both occasions and Zebo providing the scoring pass on each of those.

Both were scored wide on the right under the West Stand and both were converted by Ronan O'Gara to give the home side a 14 point lead with just 12 minutes of play gone.

Earls was the Man of the Match and no quibble there because he was at the core of everything creative in midfield as well as making a superb cover tackle in the 69th minute with his side leading 26-13. But he must have been pushed close for that accolade by Paddy Butler who had a storming game at number 8 in the absence of James Coughlan. Ian Keatley too will be happy with his night's work while Donncha O'Callaghan, despite a ten minute rest in the opening half courtesy of a touch-judge call, continued in the rich vein of form he's been showing this season.

It might have been fanciful to expect the champagne rugby to flow after the initial pouring and unforced errors allowed the tempo to drop though the Dragons played their part in that once they'd absorbed the initial shell shock they got hands on ball and made it a contest.

Tom Prydie put them on the board with a 15th minute penalty but missed two more before Lewis Robling took over and kicked one in injury time to leave it 14-6 at half time.

Conor Murray was only on a matter of minutes for Peter Stringer when he scored try number three, Butler's burst initially creating the opportunity with O'Gara's conversion coming back off the upright.

And it was O'Gara who started the move that ended with Zebo's 58th minute try, Earls again involved and before him the hard working Billy Holland, Zebo doing a little ball juggling before touching down for the bonus score.

Dragons had their chances breaching the Munster defence in the 61st minute and on two occasions they needed the TMO to rule. And on both occasions, the video replays showed Jude Quinn got it spot on. Then a break out from their own 22 was only ended first by Earl's tackle and then Ronan, preventing a try that could have made it a one score game.

Munster rounded it off with a try from replacement Tommy O'Donnell and again O'Gara touchline-hugging conversion, hit the upright. The inside, for a four from five return and a bonus point win that leaves them second in the RaboDirect PRO12 table. 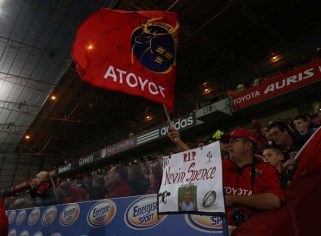 Back To Winning Ways ?