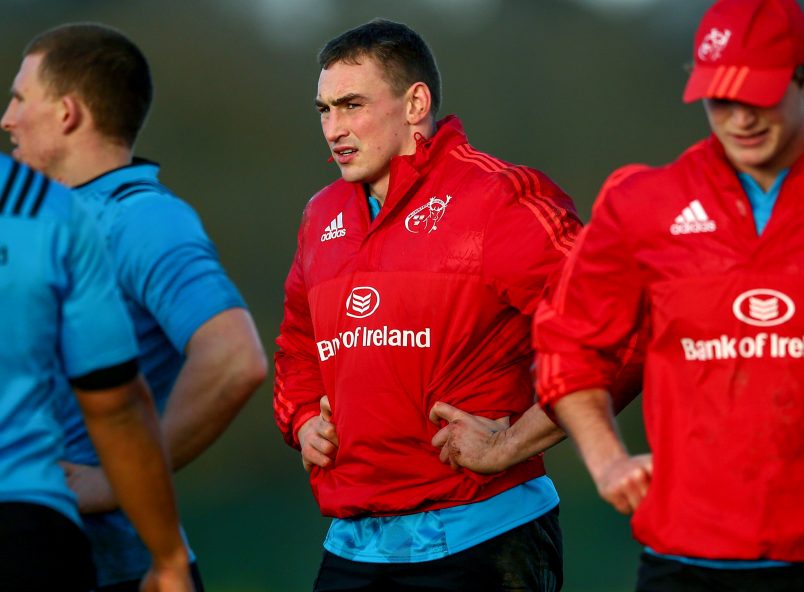 In naming his side for Sunday’s round 10 PRO12 encounter against Leinster (5.15pm) Head Coach Anthony Foley makes four changes to the starting XV that lined out against Leicester last Sunday, and the squad has been further boosted by the return of Tommy O’Donnell who is included in the replacements.

After sustaining a traumatic injury in the form of a hip dislocation in Ireland’s World Cup warm-up game against Wales in August Tommy O’Donnell makes an earlier than expected return to the match-day squad this weekend thanks to the efforts of Munster’s medical and fitness staff, and the player’s exceptional commitment to his rehabilitation programme.

After successfully completing his return to play protocols for concussion BJ Botha also returns this week and starts next to Mike Sherry and James Cronin in the front row, while Donnacha Ryan is back in the second row after last week’s late withdrawal due to illness, joining fellow Tipperary-lock Dave Foley.

The final change in the forwards sees Jack O’Donoghue introduced at openside with Robin Copeland and Captain CJ Stander as they were.

There is only one change to the backline with Tyler Bleyendaal making his second start at 10, and the New Zealander joins Conor Murray in the halfbacks.

The mid-field pairing of Denis Hurley and Francis Saili, and back three of Simon Zebo, Keith Earls and Andrew Conway all remain in situ.

On the injury front Dave O’Callaghan met with the specialist yesterday for an adductor injury and it has been confirmed that the backrow will be side-lined for approximately six weeks.

With over 22000 tickets sold at this stage, tickets are available to buy online here.

Tickets will also be available to purchase from the stadium on match-day, from midday at the Ticketmaster van in the Fan Zone Plaza, and from 3.15pm at the West Stand Ticket Booth.

This match is Munster's annual Charity Match – with Munster supporting its official charities for the season –Children's Medical & Research Foundation Crumlin, and HEADWAY. One euro from every match programme sold will be donated to the charities, so your support is greatly welcome. The charities will also be presented with signed Munster jerseys at half time by members of the squad. 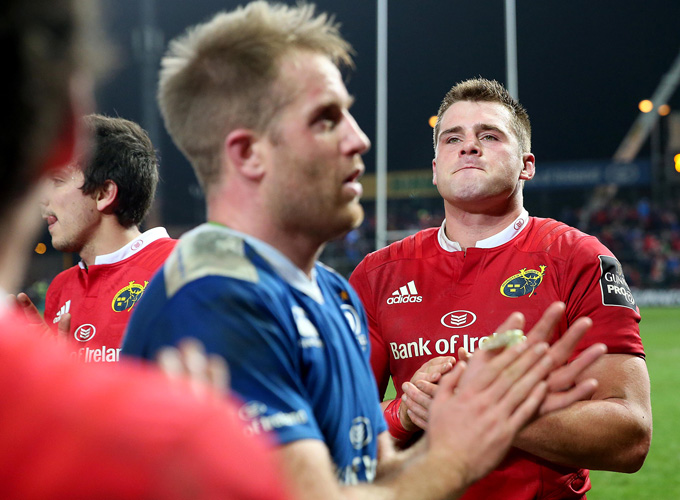 Munster this evening suffered defeat to Leinster in the Guinness PRO12 at Thomond Park. With a try a piece from Ica Nacewa and Robin Copeland in the opening 40, two unanswered second half tries for the Leinster-men through Jack McGrath and Zane Kirchner pushed the Blues out to a 7-24 victory.

It was Munster who had the first purposeful attack in the game, doing so off a scrum in midfield. Rory Scannell made the initial headway before numerous phases brought Munster deep into the opposition 22. However, the host’s opening efforts would be in vein after a staunch Leinster defence managed to win turnover ball, and once they did, sublime running from Garry Ringrose saw him carve through the Munster defence which was on the back foot. With the hard work done, Isa Nacewa provided him with the easiest of options on his left shoulder and the New Zealander ran in under the posts with less than 5 minutes played. Ian Madigan slotted the conversion to push the visitors out to an early 7-0 lead.

Munster again applied the same pressure with which they started and when the Blues went offside in defence, the hosts were presented with a chance to reduce the deficit. This time however, kicking into a strong wind, Rory Scannell was to the left of the posts with his first shot at goal.

On 15 minutes Madigan was on hand to extend Leinster’s lead. With Munster coming in from the side at a lineout, the Irish international did well in landing a penalty from the right touchline.

Again Munster came through the phases, more often than not making good yards from the 10 metre line to beyond the Leinster 22, however knock-ons coupled with excellent defensive efforts by Leinster on the ground would see Munster get little reward from their possession in the opening 30 minutes.

A few minutes later and finally the men in red were deservedly off the mark. Keith Earls made the initial step inside the Leinster defence and Francis Saili took the ball into contact from where Munster kept it tight, inching closer with each collision before Mike Sherry made a dart for the line, only to be held up with the hosts at least retaining possession for the 5 metre scrum.

Backed by the large and vocal support of the Thomond Park faithful, Munster went through the phases off the scrum and were again held up before patient phase play off the second set-piece in as many minutes saw Robin Copeland dive over under the posts. The try was awarded after consultation with the TMO as Eoin Reddan almost held up the ball up for a third time.

Scannell converted and Munster recovered well to trail by just three points at the interval: 7–10.

Despite having a strong a wind to their back, Munster laid down a statement of intent upon the resumption, opting to go down the line with a kickable opportunity when Leinster failed to roll away. When the visitors illegally brought down the maul, Munster went to the corner again, but this time, excellent work at the breakdown from Sean O’Brien left the home side wondering if they should have taken the shot at goal after all – they were pinged for holding on and the chance went a begging.

In contrast for Leinster, a crossfield kick from Madigan found Nacewa and with the winger making inroads towards the Munster line, his pack didn’t have far to travel in keeping it tight through the phases for Leinster’s second try – Jack McGrath the one to touch down with Madigan’s conversion handing his side a 10 point cushion on 55 minutes.

Try as they might, Munster failed to find the precision and penetration that was needed to regain a foothold in this interprovincial. Munster losing two of their lineouts inside the Leinster 22 with five minutes to play was symptomatic of the problems that dogged them in the second half with Leinster also applying serious pressure at the breakdown.

Any hopes of a losing bonus point went in the 80th minute – Zane Kirchner intercepting as Munster went wide off their final lineout and touching down under the posts. Madigan slotted the easiest of conversions to hand Leinster a 7-24 win.

PRO12 Round 10 round-up: There were three changes to this evening’s starting XV. Conor Murray (hip) failed to come through a final fitness test and so Tomás O'Leary started. John Ryan started for BJ Botha who withdrew due to illness with academy player Rory Scannell taking the place of Denis Hurley who moved to the replacements. Tonight’s loss, Munster’s second home loss of the current PRO12 campaign, sees Munster drop to sixth on the PRO12 table and will now travel to Ulster in Round 11 this coming Saturday at 3pm.

On a positive note, Tommy O’Donnell made a welcome return to action in the second half. After sustaining a hip dislocation in Ireland's World Cup warm-up game against Wales in August, O'Donnell made an earlier than expected return to the match-day squad

Keith Earls was taken to hospital after receiving a neck injury during the game, however there were positive signs when the winger was released and re-joined his teammates in Thomond Park following the full-time whistle

James Cronin was on crutches after sustaining a bang to the left ankle and will continue to be assessed in the coming days. 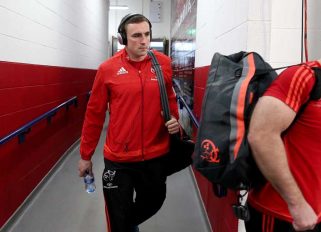 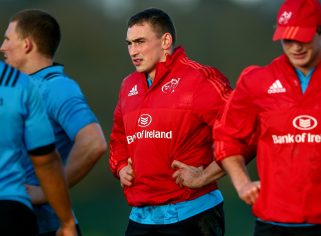