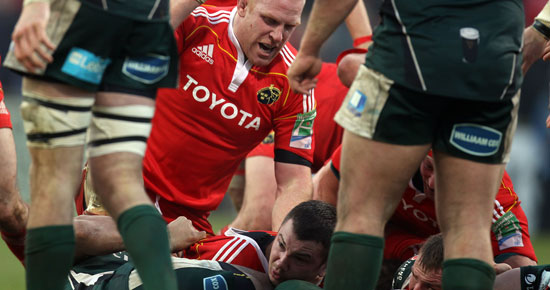 Three tries in the space of eleven minutes after they’d fallen seven points behind gave Munster a bonus point 28-14 win over London Irish at a packed Thomond Park Stadium on Saturday.

The win sees them finish in second place in Pool Three and importantly ensures further European rugby involvement with entry to the Amlin Challenge Cup quarter final and a date with Brive at the start of April.

In terms of a test of character this was certainly one and the serious question was asked of them when Sailosi Tagicakibau crashed over for a try that Ryan Lamb converted to leave Irish 14-7 and less than 13 minutes remaining.

Three minutes later, they were level, after Tony Buckley was cut down as he drove for the line Niall Ronan was on hand to gather and score.

Next up it was Keith Earls who got on the end of a neat chip through to score in the corner, Ronan O'Gara converting and then replacement Darragh Hurley scored the fourth, O'Gara again landing a smashing conversion from out wide.

It was nil all at the end of a turgid opening half, Munster coming closest when Varley looked to have scored only to be denied by the TMO. There really should have been a try at the close but Earls was called back for a forward pass and when Munster did eventually go ahead it was Varley who burrowed over six minutes into the second half.

Irish leveled when skipper Mapasua blocked down an attempted Tomas O'Leary kick and gathered for the try and then the one that stunned the home support came nine minutes later when a little dink through by Mapasua had Takicakibau racing onto it and over for the lead.

Following a little huddle, Munster galvanised themselves, won the restart and set about retrieving what now looked a desperate situation. With O'Connell, Varley, replacement Donncha O'Callaghan and David Wallace running hard lines they set the platform for final push and the arrival from the bench of Peter Stringer, Mick Sherry and Darragh Hurley contributed in no small way to the final outcome.

Afterwards Leamy made reference to those players when he said, "I think they did really well when they came on. Gave us a new impetus, freshened things up a bit. In fairness everyone put in a massive effort. Of course if had been a difficult week coming off the back of that loss in Toulon. We really wanted to put in a bit of a performance, mainly for our supporters who have been fabulous and who again turned up today in huge numbers. We really appreciate that." 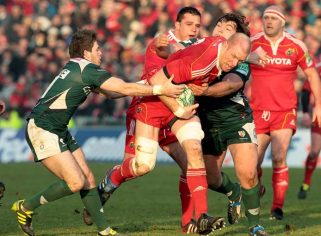