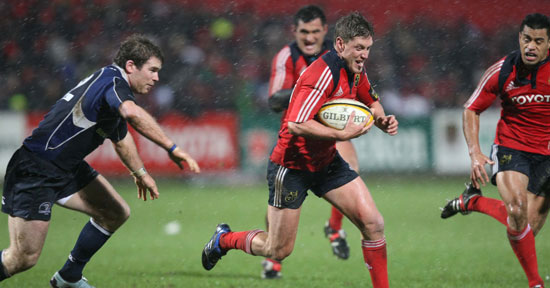 A superb team perforance garnished by the 100% kicking return from their captain Ronan O’Gara earned Munster a 29-16 victory at a rain drenched and bitterly cold Stradey Park.

O’Gara landed five penalties and converted the tries scored by David Wallace and Marcus Horan and afterwards when awarded the Man of The Match trophy by Sky’s Bob Symonds, said he would accept it on behalf of his forward pack.

Munster led 22-10 at half ime but saw that lead reduced to just six points when Rhys Priestland kicked two penalties but then the Munster pack inspired by among others, Anthony Foley simply took control in quite dreadful conditions and Horan’s try sealed the outcome.

O’Gara kicked Munster into a six point lead that was wiped out when Priestland landed a penalty and then converted Regan King’s 23rd minute try.

Two further O’Gara penalties regained Munster the advantage and then Shaun Payne’s long clearance led to a close in lineout that Peter Stringer took quickly to send Wallace over under the posts.

A fifth O’Gara penalty sent Munster in at the break leading 22-10 but with the task of defending that lead against the elements in the second half.

An early prolonged visit to the Scarlets 22 yielded nothing and Priestland cut the deficit with two penalties as the wind freshened and drove the icy rain into Munster faces.

The Scarlets out-half – drafted in when Stephen Jones cried-off with a neck problem – then missed a golden opportunity to heap further pressure on the visitors when his 61st minute penalty attempt drifted wide.

This let-off galvanised the Munster side and their pack simply took hold of the ball and refused to give it back except when the Scarlets retrieved it after O’Gara’s conversion of Marcus Horan’s try that settled the outcome. 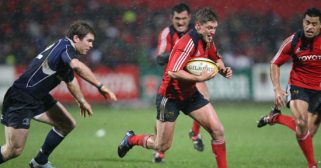