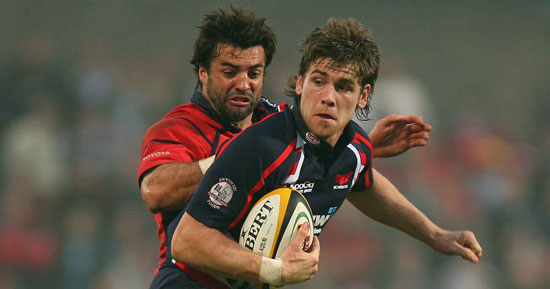 Having led by 16 points to 9 at half time Munster added three second half tries to wind up 35-9 winners against Edinburgh at Murrayfield.

It was a wonderfully committed effort by Munster who had impressive performances right across the board with a masterclass in kicking and much more from Ronan O’Gara, brillant defence from among others Alan Quinlan and Lifeimi Mafi and a man of the match award for the returning Paul O’Connell who will have cheered Ireland assistant coach Niall O’Donovan who was among the small attendance.

Munster took the lead when referee Phil Fear awarded a penalty try in the 6th minute after Mick O’Driscoll’s good lineout take set his pack rumbling towards the Edinburgh line, Frank Sheahan the one who actually grounded the ball for the try, Fear’s decision simply making the conversion a gimme.

Turnover ball provided Simon Webster with an opportunity from the restart and it needed a great covering tackle from Tomas O’Leary to prevent an Edinburgh reply. They reduced the deficit in the 13th minute Phil Godman knocked over a 22 metre penalty from in front of the posts, again Munster giving Edinburgh possession after a turnover.

With Simon Taylor leading the way, the Gunners came more into the game and after Ben Cairns made a clean break Munster were fortunate not to concede a try off their own line-out close to the tryline..

Godman further reduced the gap with his second penalty in the 17th penalty but from the restart Edinburgh were penalised for obstruction and O’Gara dissected the uprights with a 35 metre penalty. (6-10)

O’Driscoll was sent to the bin at the start of the second quarter but it was Munster who came closest to a try when Barry Murphy hacked ahead won the race for the line but knocked-on over the line. Under all sorts of pressure on their own put-in Edinburgh were penalised and O’Gara knocked over the penalty for seven point cushion (6-13).

When Brian Carney was penalised for not releasing Godman landed a marvellous effort from his side of Munster’s 10 metre line (9-13) just as O’Driscoll was returning to the fray and four minutes later it was the home side who had their personnel reduced when Taylor was shown a yellow-card for apparently killing the ball at a ruck.

Once again in trouble at scrum time, Edinburgh conceded the penalty and once again O’Gara was unerring with the boot, this time from 40 metres to put Munster 16-9 in front at the break

At the restart Munster lost Carney to the sin-bin for tackling full-back Lopez Fleming while the ball was in the air and oments later Godman squandered a great opportunity blasting a penalty wide from in front of the posts. That miss assumed greater significance when Munster rumbled over the Edinburgh line, Paul O’Connell credited with the score and once again O’Gara was on the mark with the conversion from the touchline. (9-23).

They might have gone further ahead when Murphy blasted through the home defence and kicked ahead with Anthony Horgan showing great pace to carry on the move but just miss getting the touchdown.

But they did go further ahead in the 56th minute when O’Gara’s delightful little chip ahead was collected by Quinlan who scored under the posts leaving the try provider with an easy two pointer (9-30).

Next to leave the field was referee Phil Fear with a hamstring injury and he was replaced by touch judge Graham Knox and although Edinburgh dominated the period after, Munster’s defence was impressively unyielding.

Denis Fogarty replaced Frank Sheahan in the 69th minute almost immediately celebrated with a try on the right with O’Gara suffering his first miss of the night, his conversion attempt coming back off the inside of the upright.