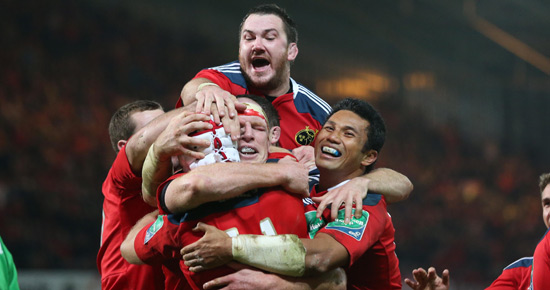 Munster bounced back from last week’s defeat in Edinburgh to claim a hard earned win against Gloucester at Thomond Park.

The home side dominated possession throughout but came up against a well drilled Gloucester defence. A First half try from Damien Varley followed by a well worked Johne Murphy try saw Munster pull away from a tiring Gloucester side late in the second period as Munster got their Heineken Cup campaign back on track.

Munster started much stronger and opened the scoring after three minutes through an Ian Keatley penalty. The visitors were given a chance to immediately hit back but Jonny Bentley pushed his penalty wide of the posts.

Keatley would go on to punish that miss as he struck two penalties from almost the exact same spot in front of the posts to edge Munster into an early 9 point lead.

Gloucester played their way back into the game and were rewarded for their pressure when Dan Robson spotted a gap on the blindside of a ruck and he put Charlie Sharples in for a try in the corner. Bentley made no mistake with the conversion.

The try drew a response from both the home crowd and Munster and when Gloucester infringed at the break down five metres from their own line, captain Peter O'Mahony declined the three points on offer and instead pointed to the corner.

That would prove to be the right call as Varley was driven over the line and after consultation with the TMO, the referee awarded the try. Keatley's conversion from wide on the touchline sailed straight between the sticks to hand his side a 16-10 half time lead.

Munster continued to control possession as well as dominating territorially but the visitors repelled wave after wave of attack. Keatley had the chance to extend Munster's lead but he pushed his penalty just wide.

A searing break from Keith Earls brought Munster deep into Gloucester territory with Conor Murray just failing to collect the offload. A huge scrum saw Munster turn the ball over before the referee ruled that the Gloucester front row broke their bind. Keatley landed his fourth penalty of the evening to give Munster a 19-10 lead.

Roared on by a loud vocal home support, Munster upped the tempo again and when Keatley's beautifully flighted cross field kick was collected by Murphy, Munster had their second try of the evening and the result was put out of doubt.

Keatley duly added the extras to bring his own personal tally to 16 points for the evening.

Rob Penney emptied his bench with all eight substitutes featuring but it was CJ Stander who had the biggest impact as he stole Gloucester ball at the base of a ruck before charging through the middle, putting his side back on the front foot.

Keith Earls had a try ruled out in injury time when the touch judge spotted a foot in touch. But it was Munster who picked up the win, their first of the campaign and in doing so also denied Gloucester a losing bonus point. 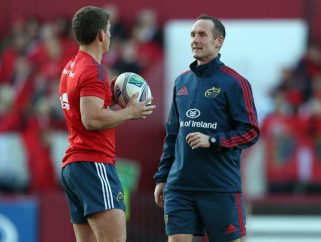