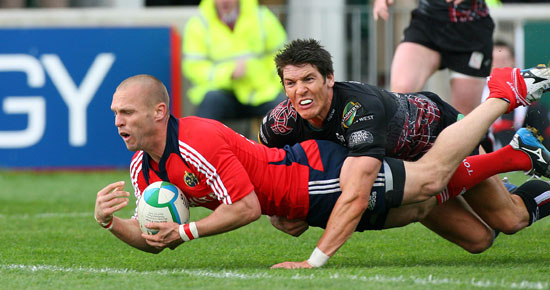 Munster are through to their eight Heineken Cup Semi Final and will now go on to meet Leinster in Croke Park (Saturday May 2nd, ko 5.30pm), following their 43-9 win over Ospreys in a packed Thomond Park Stadium.

And it was a victory that was as emphatic as the final scoreline suggests after the home side took control soon after half time at which stage they led 16-9. It was a drop-goal from Paul Warwick just before the break that stretched the lead to ten points and although Ospreys were first to score five minutes after the resumption to give themselves every chance, Ronan O’Gara soon cancelled that out with his fourth successful kick and when Paul O’Connell went over in the corner six minutes later and O’Gara added the extras, Munster were unstoppable.

The Heineken Man of the Match went to Warwick who ended up scoring a try and two drop goals and few could quibble with the decision. However in what was a complete squad performance, skipper O’Connell led by example while every Munster players contributed hugely in what was a very impressive dismissal of a side touted as possible competition winners.

O’Gara opened the scoring with a penalty after 14 minutes in what was a tense opening quarter. James Hook levelled after an earlier effort flew wide and O’Gara and Hook swopped penalties before Warwick scored his try in the 34th minute with O’Gara ineviably adding the conversion.

What probably started to break Osprey’s hearts was the sight of Warwick booming over a massive drop goal after gathering a Mike Phillips clearance to send Munster in at the break in rude good health leading 16-6.

Hook provided the chink of light with a 45 minute penalty but O’Gara replied in kind and when Doug Howlett stepped in-field to create the ruck and the space Tomas O’Leary sent O’Connell over on the wide right.

By now there was only going to be one winner, as Lifeimi Mafi twisted and teased and thumped in the tackle; David Wallace was a constant threat with ball in hand and Alan Quinlan knocked anything that moved in a black jersey.

Warwick then knocked over his second drop-goal on the run from almost half way before Munster engineered space again on the right after a ruck and Mafi produced an astonishing under-arm flipped pass in the tackle to send Keith Earls skating over.

Then from the restart, Ian Dowling won possession, passed to Earls and the youngster set off on his 60 metre run to the line up along the East Stand touchline, to score at the corner flag despite the last gasp tackle from Mike Phillips.

Of course O’Gara added the touchline conversion and in the closing stages as the Ospreys came hunting for a consolation try, Munster defended their line as though they only held a one point lead, to deny the visitors any crumb of comfort.