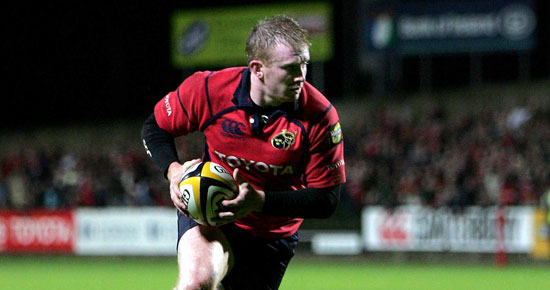 As they have done in the past Munster ground out this victory at the Arms Park to equal the tournament record of 11 successive wins (set by Leicester Tigers) while Ronan O’Gara’s perfect six from six took his total in the competition to 803 points. Besides his general play, it was O’Gara penalties in injury time of the opening half and the 79th minute that ultimately secured this latest victory.

Forced to re-adjust their starting line-up when Anthony Horgan had to withdraw just hours before kick off with an Achilles tendon strain, Munster brought Tomas O’Leary off the bench to play on the wing and the Ireland A international was as faultless as he was brave throughout the game. He had of course the perfect role model in full-back Shaun Payne who once again showed that he is the best Irish full back bar none while Ian Dowling also delivered an impressive performance.

Given the wet and windy conditions it was a game that was always going to be decided up front and while Munster weren’t picture perfect they had in John Hayes, Man of the Match Alan Quinlan, David Wallace, Denis Leamy and when he came on as a replacement, Darragh Hurley, players whose performance lifted those around them.

After an early scare when scrum-half Mike Phillips slipped through, Munster were trailing 6-3 as the game entered the final ten miutes of normal time of the opening half when they were awarded a penalty from what looked a kickable position. Instead of going for goal they went to the touchline and an Alan Quinlan take at the tail led to the inevitable drive for the line. Initially it was repelled but Munster worked the legs again and Denis Leamy did extraordinarily well to engineer a one-handed touch down although landing on his back.

O’Gara slotted the conversion but four minutes into injury time he landed a crucial score when kicking a 45 metre penalty into the wind. That left Munster with a 13-6 interval lead but by the the 55th minute that lead had been reduced to a single point after Ben Blair added two penalties.

O’Gara steadied the ship with two more of his own and just before the end of normal time denied the Blues a bonus with a his sixth successful kick from wide on the right.