Hat Trick For Ronan As Munster Sweep To Victory 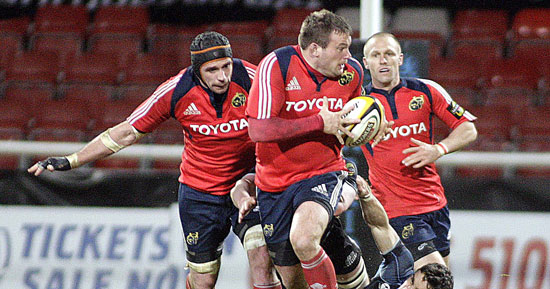 Three tries from flanker Niall Ronan, two in the second half, helped Munster to a 26-13 victory over Glasgow Warriors at a well attended Firhill.

Not surprisingly Ronan won the Man of the Match award but he was pushed close for that accolade by his captain Mick O’Driscoll whose sublime pass sent Ronan over for the first try, Alan Quinlan, Peter Stringer and out-half Paul Warwick who left the Glasgow defence flat-footed in the 32nd minute before delivering the perfectly timed pass for Keith Earls to score beside the posts.

However, as Quinlan pointed out afterwards, this was an all round performance with everyone, replacements included contributing handsomely to a win that sees Munster now eight points clear of second placed Leinster who play Ulster on Sunday.

Warwick was wide with a penalty effort in the 5th minute before Max Evans split the Munster defence two minutes later to send Lome Fa’tau over for a try. Dan Parks hooked the conversion and the normally reliable number 10 missed several subsequent kicks which were to prove crucial.

From the restart of Ronan’s O’Driscoll engineered try, Quinlan knocked on and moments later Kelly Brown crashed over after Glasgow had taken a quick tap. Parks was wide with the conversion and a 26th minute penalty before Doug Howlett ended full-back Bernardo Stortoni’s involvement with a crunching tackle in mid-field that brought an end to a very promising looking Glasgow attack.

Warwick then sliced through the home defence to find Earls roaring up in support and after Parks had reduced the deficit to a single point Warwick was wide with an injury time penalty from distance.

Munster began the second half without the industrious James Coughlan who had been yellow-carded before the break and they were forced to absorb early pressure as Glasgow sought to make the most of their numerical advantage. However the Munster rearguard action was as brave as it was resolute and Warwick earned acres of territory with some superb line kicking.

From one such superb effort that took play from the Munster 22 to the Glasgow 5 metre line, Ronan scored his second and his side’s third try after a succession of pick and drives and although Warwick was wide from wide on the right, he was right on the money when Ronan completed his hat-trick in the 58th minute from a similar ploy and position – fashioned again by Warwick’s boot – in the 58th minute.

Deep in injury time, Glasgow laid siege to the Munster line, launched a plethora of close-in drives but were thwarted by a magnificent Munster defence to be denied even the consolation of a bonus point.