Hanrahan On Target For Munster 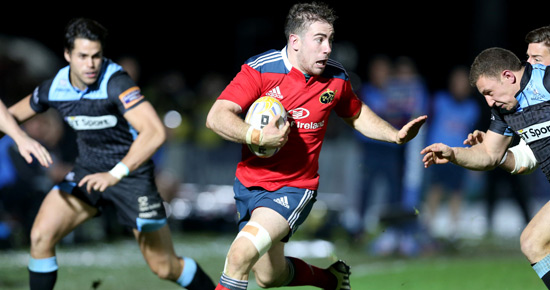 An impressive defensive effort and a skillful display from man of the match JJ Hanrahan gave Munster a deserved 13-6 victory away to Glasgow on Friday night.

There was a last minute change before kick-off when Paul O’Connell was ruled out during the warm-up with a calf strain. His starting place went to Billy Holland, and Dave Foley who travelled as a precautionary measure joined the replacements.

In a tense opening half the error count was high for both sides with a number of handling errors and attacking phases ending in forward passes and knock-ons.

Duncan Weir kicked the home-side straight in to action with a penalty in the opening minute after Munster didn’t release in the tackle and minutes later Billy Holland was penalised for coming in from the side but Weir’s attempt struck the post and dropped wide.

JJ Hanrahan opened his account with a well-executed 50m strike after Peter O’Mahony was taken out in the lineout and both sides were level after 20 minutes.

Another Munster infringement, this time in the scrum, gave Weir his third chance at goal which he duly kicked and the home-side moved ahead by three before half-time.

Munster stepped up the intensity after the break and JJ Hanrahan took the Glasgow defence on, darting down the wing and breaking through for the only try of the game. He then added the extras to push Munster seven points ahead.

The gritty encounter continued with crunching tackles and a physical battle at the break-down. The heated exchanges resulted in a few off the ball scuffles and referee Ian Davies had to have a word with both captains.

Munster displayed a huge defensive effort on their line after the 50 minute mark and showed great composure in successfully turning Glasgow over at a critical point in the game.

But inconsistencies at the scrum and indiscipline proved costly when James Cronin and Dave Kilcoyne both picked up yellow cards in the second half. After repeated collapsed scrums Davies binned Kilcoyne and Glasgow loose-head John Welsh at the same-time and the reduced sides battled it out for the remaining minutes.

As the clock winded down Munster once again soaked up the attacking onslaught from Glasgow and kept them score-less in the second half to secure victory and claim the top of the table spot. 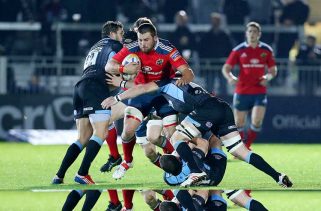