Gutsy Win Sends Munster Back To The Top 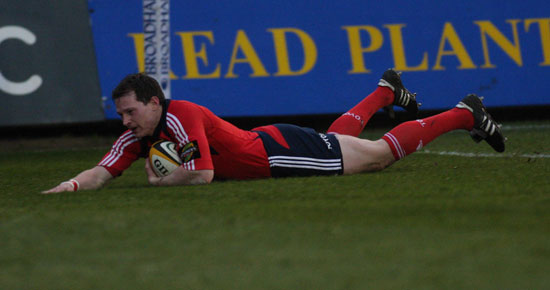 Tries in the opening half from Ciaran O’Boyle and replacement Anthony Horgan in the second saw Munster defeat Newport Gwent Dragons 20-9 and leap-frog Leinster at the heads of affairs in the Magners League.

With the wind and rain at their backs in the opening half Munster led 13-6 at the break but were forced to endure some anxious moments as the home side took the game to them in the second half. After James Arlidge had kicked a 62nd minute penalty to leave just four points separating the sides, Munster left their supporters living on their nerves and only a Peter Stringer tackle on Rhys Thomas at the corner flag prevented the Dragons taking the lead.

But credit the Munster defence particularly in the red zone for keeping the Dragons at bay and credit too to Anthony Horgan for the manner in which he squeezed in at the corner at the other end in the 66th minute, following good work from Lifeimi Mafi, to score the clinching try.

Munster enjoyed much the better of the exchanges in an opening half that saw them score as a good a try as will be seen all season when Denis Hurley made the decisive incursion before delivering the perfect scoring pass to the flying O’Boyle. Warwick added another penalty before the Dragons laid siege to the Munster line but were denied by superb Munster defence, in the end an Arlidge penalty all they had to show for their effort.

Warwick was short with a penalty effort from half way and with Richard Parks already in the bin, his colleague Thomas was fortunate not to join him just before the break when conceding a penalty that surprisingly Warwick missed.

Whether the home side upped the tempo or conditions came into play, Munster found themselves on the hindfoot for long periods of the second half, not helped of course by the yellow cards handed first to Darragh Hurley and then Alan Quinlan who had a huge influence on this game as did his skipper O’Driscoll.

Arlidge left it a four point game with his third successful kick but 12 minutes from time, his attempted clearance was blocked down and from a five metre scrum, Stringer probed the blindside and Horgan showed his experience by beating off the tackle to score in the corner, Warwick knocking the touchline conversion over off the inside of the left upright.