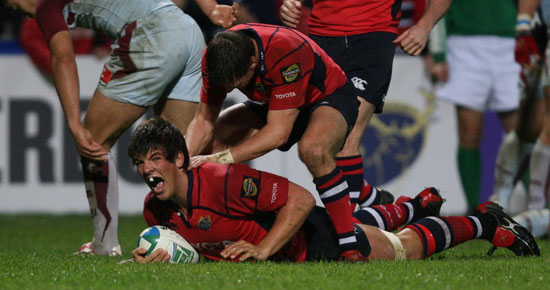 They scored three tries in the opening half at the end of which they led 20-6, and completed the job after Bourgoin scored a breakaway try at the start of the second half.

Benjamin Boyet gave the visitors the lead with a 5th minute penalty before Frank Sheahan crashed his way over from a well rehearsedline-out move. Ronan O’Gara missed the touchline conversion and Boyet restored Bourgoin’s lead with a second penalty in the 10th minute.

Munster cranked it up in the second quartter and young tyros Ian Dowling and Barry Murphy raced in to score tries, with O’Gara adding the extras to Murphys under the sticks score.

A promising Munster move broke down in the 22 andBourgoin broke clear for a length of the pitch try from Sebastien Laloo with Boyet converting to leave just one score separating the sides.

However, Munster composed themselves and Donncha O’Callaghan detached himself from a rolling maul to score to the right of the posts. O’Gara converted and added the points to Kelly’s try and to Kyriacou’s – a 70th minute replaceement for Sheahan – 76th minute effort.

Bourgoin had the final say with a Florin Denos try and conversion from the touchline from Boyet.