With the crucial December Heineken Cup games just around the corner, Munster couldn’t have asked for a better lead-in game than this one tonight against the Warriors from Glasgow.

And with RaboDirect PRO12 points even more vital now following defeat to Scarlets in Cork last weekend, they couldn't really have chosen a tougher opponent.

Warriors have lost just once on the road so far – in Ravenhill on the opening day – and they boast the meanest defence in the League.

They also have their international contingent back and those who might scoff at that, following Scotland's defeat by Tonga, need be wary least their plan is to put that particular wrong to right tonight.

Munster also have their internationals available with the notable exceptions of Conor Murray and Peter O'Mahony and of course, Paul O'Connell and perhaps a measure of Rob Penney's awareness of the challenge faced this evening is that he wastes no time in drafting in those players despite the good form of those in situ while the November internationals took place.

So not surprisingly then, Ronan O'Gara relegates Ian Keatley to the bench, Simon Zebo displaces Luke O'Dea and Keith Earls continues in the number 13 slot he occupied for Declan Kidney with Casey Laulala kept in reserve.

Up front Dave Kilcoyne starts at loose-head, Donncha O'Callaghan and Donnacha Ryan are paired in the second row and CJ Stander makes his first start at openside wing-forward in the absence of the injured Niall Ronan.

The return from injury of James Coughlan to anchor the scrum could prove particularly significant while Tommy O'Donnell also returns from injury, albeit of much shorter duration that Coughlan, to the blindside berth where he impressed last time he played there against Ospreys at the Liberty in late September.

First Half Seals It

Three outstanding first half tries, two from new boy CJ Stander, all converted by old boy Ronan O’Gara who tacked on a penalty, set the tone for Munster’s 31-3 win over Glasgow Warriors in front of a crowd just shy of 9000 at Thomond Park Stadium.

It was a night to remember for Stander, making his first start in a Munster jersey, who was awarded the Man of the Match gong, but even he would admit he'd have been pushed close for that accolade had the creator of his opening try, Tommy O'Donnell, remained on the pitch for the duration.

The Tipperary man was in pulsating form, racing deep into Warrior territory to set up the opener and then blasting through from 35 metres to score under the posts in the 22nd minute. Unfortunately, he limped out of the game in the 48th minute with an ankle injury to be replaced by another Tipperary man, Paddy Butler, who proved an able deputy.

But Stander was a worthy MOTM winner's and if his first try was down to persistence his second was attributable to pace. He picked up a wayward pass inside his own 22 at the Ballynanty end before setting off on a swerving run that ended with a try in the right hand corner with Simon Zebo on his left shoulder in support. O'Gara struck a superb touchline conversion to push his side into a 24-3 lead to effectively seal the outcome.

However, there was still a load of work for Munster to do against a Warriors side who played throughout with a verve and inventiveness that asked serious questions of Munster's defence on numerous occasions. None more so than in the 16th minute when it required a no-mistake Zebo tackle to deny DTH Van der Merwe in the left hand corner.

Two minutes later, Duncan Weir was wide with a drop goal attempt but as they were to do for Stander's second try, Warriors, when once again pressing inside the Munster 22, coughed up possession and it ended in a try from O'Donnell, set on his way by the impressive James Coughlan.

The sequence for those tries probably summed up the respective fortunes of the sides. Warriors unable to convert possession and position into points; Munster making the most of their opportunities and willing to strike whenever from wherever.

Credit to a Munster defence that was outstanding and to a solid set piece at scrum and line out.

In terms of comparisons, Rob Penney had to well pleased with this night's work from a week prior though weather conditions were so totally different Afterwards he was honest enough to admit that the final scoreline did scant justice to the effort the visitors put in. He was also frank enough in his view that his side have to ratchet it up a fair few notches ahead of the challenge that will be laid down next Saturday at the same venue. 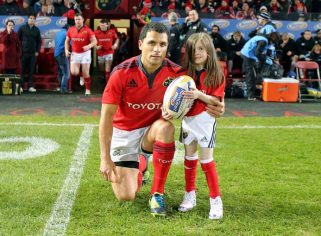