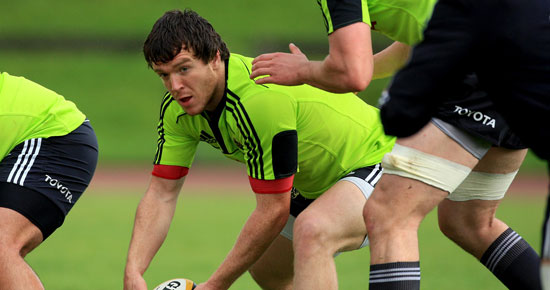 Munster face arguably their stiffest Magners League test to date when they travel to Belfast tomorrow for the clash with Ulster (7.05).

The record shows that they haven't won in Ravenhill since March 2007 and they'll arrive with a squad that's a mixture of Academy, Development and senior players.

Coach Tony McGahan includes three players in his starting XV, Ivan Dineen, Mike Sherry and Ian Nagle, who will be getting their first start, a trio who between them have just six caps all from the bench while four of the eight replacements tomorrow are either Academy or Development contracted players.

With the exception of Dineen, who showed some nice touches in the short while he was on last weekend against Treviso, and full back Scott Deasy, the backline has an experienced hue about it with Peter Stringer winning his 200th cap, directing affairs as he has done for years, from the base of the scrum.

Up front, again with two exceptions, Sherry and Nagle, there's an abundance of experience and like Dineen, Sherry made an impression last time out and capped it off with a well taken try. Speaking about the newcomers Alan Quinlan, himself winning his 204th cap said "We all had to start sometime and they

have shown in the games they've played for us and in the A matches that they're well capable. They'll not leave us down."

"Playing in Ravenhill is as tough an away fixture as you'll get,"Quinlan continues, "and our record there in the past while hasn't been good. It not something you need to dwell on but the incentive is there. We have a bit of a break after this and would like to resume in November where we are now."

Ulster are in something of a similar position to Munster. Their side shows seven changes of personnel and one position switch from that which played Edinburgh last weekend but they are able to wheel out their South African contingent of Robbie Diack, Pedrie Wannenburg, Ruan Pienaar and Johann Muller who captains the side while confident enough to leave another South African BJ Botha watch what unfolds from the stands.

Back in 2007, it was Quinlan's cross field kick that found Brian Carney who scored the winning try that silenced the home crowd. Munster will know they can't hand Ulster the sort of lead they did that time but the sort of inspired performance that saw them claw back the 18 point deficit would do nicely. 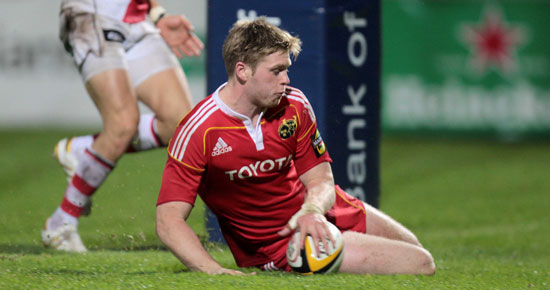 With four minutes to go however, it seemed the game was headed for a draw as Ruan Pienaar lined up what looked for him a sitter. But, as he had done at the end of the first half, the South African missed and from the restart came the try that clinched the deal and denied Ulster a losing bonus.

The result apart, there's little doubt that of the two coaches, Tony McGahan will have been by far the more satisfied with his side's performance. He arrived at a soaking wet Ravenhill with a side containing five Development/Academy players plus one, Ivan Dineen who is on a training contract and several with little or no game time.

Dineen had a huge game capped by his late try and if Niall Ronan deservedly took the Man of the Match accolade, the long list of his contenders included Wian du Preez – quite simply the most impressive South African on view- Ian Nagle, Billy Holland and James Coughlan.

It had rained all day leaving the pitch sodden and as might had been expected Ulster were quick out of the traps, their early pressure yielding three points when Pienaar landed a 7th minute penalty after Nevin Spence's clear break had Munster scrambling in defence.

Warwick leveled just minutes later but Ulster kept the pressure on and once again they launched themselves at the Munster line, Nagle, Coughlan and Holland needing to be brave to deny them in close, Scott Deasy and Denis Hurley putting in the tackles out wide. Ulster's reward just a Pienaar's penalty.

Alan Quinlan retired with a hamstring injury to be replaced by Peter O'Mahony with the only other scoring opportunity of the second quarter falling to Pienaar who fired his effort right and wide.

Warwick tied the game in the 43rd minute and then saw a drop-goal go well wide but in the 70th minute he showed admirable nerve to kick Munster in front.
Pienaar should have leveled but from the restart as Ulster tried to counter, Dineen sprang on Ian Humphreys dislodged, then gathered the ball to race in under the posts. 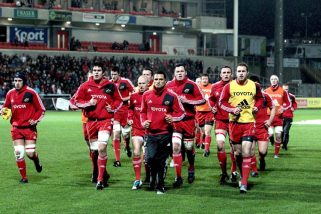 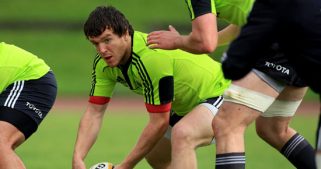